By modifying the rate at which chemical reactions take place, nanoparticle catalysts fulfill myriad roles in industry, the biomedical arena and everyday life. They may be used for the production of polymers and biofuels, for improving pollution and emission control devices, to enhance reactions essential for fuel cell technology and for the synthesis of new drugs. Finding new and more effective nanoparticle catalysts to perform these useful functions is therefore vital.

Now Nongjian (NJ) Tao, a researcher at Arizona State University’s Biodesign Institute, has found a clever way to measure catalytical reactions of single nanoparticles and multiple particles printed in arrays, which will help characterize and improve existing nanoparticle catalysts, and advance the search for new ones. 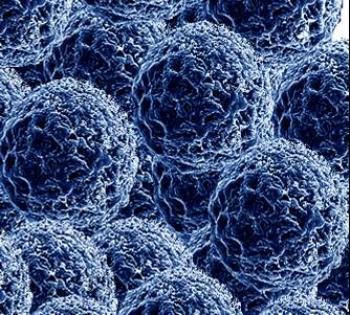 Most catalytic materials synthesized in labs contain particles with different sizes and shapes, each having different electrocatalytical activities, but the conventional methods measure the average properties of many nanoparticles, which smear out the properties of individual nanoparticles.

In the current study, platinum nanoparticles acting as electrochemical catalysts are investigated by means of the new technique, known as plasmonic electrochemical imaging. The method combines the spatial resolution of optical detection with the high sensitivity and selectivity of electrochemical recognition.

Results of the study appear in this week’s advanced online edition of the journal Nature Nanotechnology.

Scanning electrochemical microscopy (SECM) has been used to image electrochemical reactions by mechanically scanning a sample surface using a microelectrode. In this process however, imaging speed is limited and the presence of the microelectrode itself may impinge on the sample and alter results.

“Our approach is to measure electrochemical reactions without directly detecting the electrons,” Tao said. “The trick is to detect the conversion of the reactant into reaction products associated with the exchange of electrons.” Such conversion in the vicinity of the electrode affects the plasmon, causing changes in light reflectivity, which the technique converts to an optical image.

Using plasmonic electrochemical current imaging, Tao’s group examined the electrocatalytic activity of platinum nanoparticles printed in a microarray on a gold thin-film electrode, demonstrating for the first time the feasibility of high-throughput screening of the catalytic activities of nanoparticles.

Additionally, the new study shows that the same method can be used to investigate individual nanoparticles. As an electrical potential is applied to the electrode and cycled through a range of values, nanoparticles clearly appear as spots on the array. The effect can be seen in accompanying videos, where nanoparticle spots ‘develop’ over time as the potential changes, much like a polaroid picture gradually appears.

In addition to his appointment as the Director of the Center for Bioelectronics and Biosensors at the Biodesign Institute, Tao is a professor in the School of Electrical, Computer and Energy Engineering, one of ASU’s Ira A. Fulton Schools of Engineering.

Spread the word about the PeopleSoft upgrade

To minimize disruptions to university business, departments should use upcoming staff meetings to determine which of their business processes will be affected by the outage.

Spread the word about the PeopleSoft upgrade

The entire ASU community will be affected by the Sept. 20-25  planned PeopleSoft outage. While the system is being upgraded, both PeopleSoft and My ASU will be READ-ONLY.

To minimize disruptions to university business, departments should use upcoming staff meetings to determine which of their business processes will be affected by the outage. Then consider the following questions to develop a comprehensive communications plan:

ASU online, Blackboard, Google docs and apps, Gmail, and Outlook, will function normally and not be affected by the outage.

The upgraded PeopleSoft system will be split into two parts: one for human resources and payroll functions and another for student transactions. This upgrade is the first major one to the PeopleSoft system since it was installed at ASU in 2006.

If you have questions about the PeopleSoft outage, use the link in the Quick Links box on the peoplesoft.asu.edu page.