Now, Qingke Kong and his colleagues at the Biodesign Institute at Arizona State University, have developed a technique to make such vaccines safer and more effective. The group, under the direction of Dr. Roy Curtiss, chief scientist at Biodesign’s Center for Infectious Diseases and Vaccinology, demonstrated that a modified strain of salmonella showed a five-fold reduction in virulence in mice, while preserving strong, immunogenic properties. 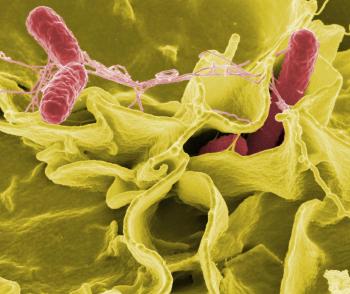 Their findings appear in the cover story of the current issue of the Journal of Immunology.

Existing vaccines are inadequate for protecting vulnerable populations for several reasons. Heat stabilization and needle injection are required, which are often impractical for mass inoculation efforts in the developing world. Repeated doses are also needed to induce full immunity. Finally, the prohibitively high costs of existing vaccines often deprive those who need them most. The problem is exacerbated by the recent emergence of antibiotic-resistant strains of pneumococcus causing the disease, highlighting the urgency of developing safe, effective, and lower-cost antipneumococcal vaccines.

One of the most promising strategies for new vaccine development is to use a given pathogen as a cargo ship to deliver key antigens from the pathogen researchers wish to vaccinate against. Salmonella, the bacterium responsible for food poisoning, has proven particularly attractive for this purpose, as Curtiss explains: “Orally-administered RASVs stimulate all three branches of the immune system stimulating mucosal, humoral, and cellular immunity that will be protective, in this case, against a majority of pneumococcal strains causing disease.”

Recombinant Salmonella is a highly versatile vector – capable of delivering disease-causing antigens originating from viruses, bacteria and parasites.  An attenuated salmonella vaccine against pneumonia, developed in the Curtiss lab, is currently in FDA phase 1 clinical trials.

In the current research, the team describe a method aimed at retaining the immunogenicity of an anti-pneumonia RASV while reducing or eliminating unwanted side effects sometimes associated with such vaccines, including  fever and intestinal distress. “Many of the symptoms associated with reactogenic Salmonella vaccines are consistent with known reactions to lipid A, the endotoxin component of the Salmonella lipopolysaccharide (LPS),” the the major surface membrane component , Kong explained.  “In this paper, we describe a method for detoxifying the lipid A component of LPS in living cells without compromising the ability of the vaccine to stimulate a desirable immune response.”

To achieve detoxification, salmonella was induced to produce dephosphoylated lipid A, rendering the vaccine safer, while leaving its ability to generate a profound, system-wide immune response, intact.

To accomplish this, a recombinant strain of salmonella was constructed using genes from another pathogen, Francisella tularensis, a bacterium associated with tularemia or rabbit fever. Salmonella expressing lipid A 1-phosphatase from tularensis (lpxE) showed less virulence in mice, yet acted to inoculate the mice against subsequent infection by wild-type salmonella.

Francisella LpxE was shown to effectively strip the 1-phosphate group from Salmonella’s lipid A, without loss of the bacterium’s capacity for colonization. The research holds promise for constructing modified live attenuated Salmonella vaccine strains for humans, with dephosphoylated lipid A providing additional safety benefits.

The research was supported by grants from the Bill and Melinda Gates Foundation and the National Institute of Health.

Scientist Aurélie Crabbé presented research to attendees at a meeting in New York City during the Belgian economic mission presided by Crown Prince Philippe of Belgium.

A scientist in ASU Biodesign Institute’s Center for Infectious Diseases and Vaccinology presented research to attendees at a meeting in New York City during the Belgian economic mission presided by Crown Prince Philippe of Belgium. 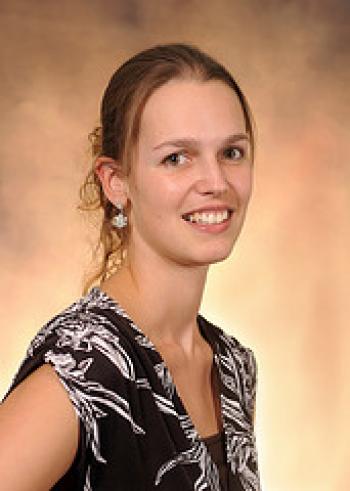 Aurélie Crabbé, Ph.D., was one of a few outstanding young scientists invited to present at the prestigious June 25 event by the President of the Vrije Universiteit Brussel (VUB). In 2009, Crabbé earned a Ph.D. from VUB in Bioscience Engineering.

An assistant research scientist in the Biodesign Institute lab of Professor Cheryl Nickerson, Ph.D., Crabbé is studying how disease-causing agents are affected by spaceflight conditions and is also developing tissue models of the human body to better understand how these agents cause disease.

Prior studies by the research team have indicated that certain microbes become more virulent when grown under spaceflight conditions, thus increasing the risk of astronauts becoming sick during flight. The scientists are conducting a NASA experiment on the final space shuttle flight scheduled to launch in July to determine if what they have learned from microbe behavior in space can be used to enhance the efficacy of vaccines to fight infectious disease.

The nine-day Belgian mission is visiting the United States to strengthen economic relations with American companies. The pharmaceutical and biotechnology sectors are among those represented on the mission.  Prince Philippe opened the Belgium exhibit pavilion at the BIO International Convention in Washington, D.C. The conference is hosted by the Biotechnology Industry Organization and runs June 27-30 at the Walter E. Washington Convention Center.