Generating electricity from sunlight offers a clean, safe, renewable option for producing power. The problem with expanding its use has always been the high cost.

One major key to solving the problem is coming up with photovoltaic cell technology that is more efficient at converting solar light into electrical energy. The fewer cells it takes to generate substantial amounts of energy, the less expensive it will be to harness solar power for providing electricity. 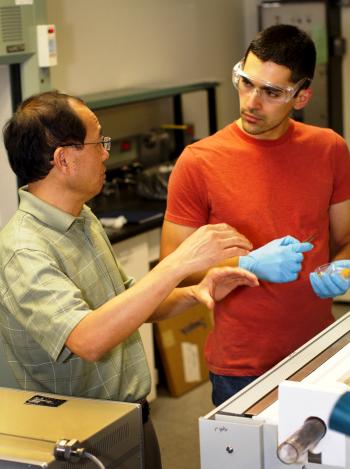 A promising new approach to achieving the goal is being developed by Arizona State University engineers Cun-Zheng Ning and Derek Caselli. Ning is a professor in the School of Electrical, Computing and Energy Engineering, one of the ASU’s Ira A. Fulton Schools of Engineering. Caselli is pursuing a Ph.D. in electrical engineering.

Details of the project, which is supported by the U.S. Army Research Office, are presented in a recent article  by Ning and Caselli posted on the website of the International Society for Optics and Electronics – called SPIE – that works to advance light-based technologies.

They describe a design that places different solar-cell materials side by side beneath other materials that act as a “dispersive concentrator.”

This arrangement enables sunlight to be separated into different colors before it is absorbed by the material within the cells. The absorption cells are arranged in a way that ensures each color is matched to the material best able to absorb it.

Caselli explains: “Sunlight can be separated into different components of the light spectrum and distributed among the materials within the cells, so that each photon is absorbed by the one best suited to convert it to electricity."

The key innovation is making the absorbing materials in all the cells in a one-step fabrication process on a single substrate – or platform.  This would eventually provide high-efficiency, low-cost solar power, Ning says.

Ning and Caselli also are developing technology for a new fabrication process for the new type of solar cell.  It could be less expensive than many current cell-fabrication processes, they say, and produce new cells that will be as efficient at converting sunlight into electrical energy as the highest-performing cells now on the market.

“Our simulation results show efficiencies roughly similar to those obtained by the highest-performing cells, but there are a number of ideal conditions that we assume in our simulations for the sake of simplicity,” Caselli says.

"We suggest there are a number of ways the cell design could be optimized to make them as efficient as the highest-performing cells at a lower cost,” he says.

He says the geometry of the cells could be altered to maximize their light-absorption capability, and different semiconductor materials could be used that would enhance cells’ ability to conduct electricity.

ASU's Department of Chemistry and Biochemistry was recently ranked sixth worldwide in impact, according to an analysis by Science Watch.

Arizona State University’s Department of Chemistry and Biochemistry was recently ranked sixth worldwide in impact according to an analysis by Science Watch.

This study is timely, as two distinguished organizations – UNESCO (the United Nations Educational, Scientific and Cultural Organization) and IUPAC (the International Union of Pure and Applied Chemistry) have jointly proclaimed 2011 the International Year of Chemistry. 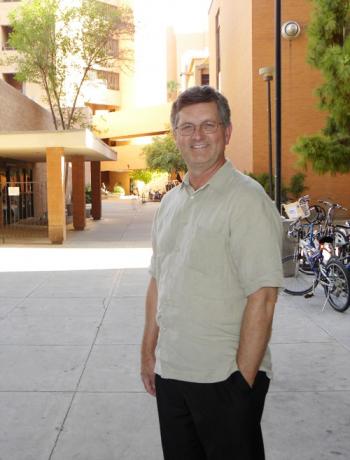 Thomson Reuters’ unique store of publication and citation statistics was used to tabulate the high-ranking institutions in the diverse field of chemistry according to impact (citations per published research paper).

"All of each institution's papers (in the highly aggregated field designated "chemistry" by our Essential Science Indicators database) were considered," said Christopher King, editor of Science Watch. "For 2001 to 2011, we showed ASU with 1,305 such papers, cited a total of 41,517 times." With an average citation per paper (or impact factor) of 31.81, ASU is only outranked by Scripps Research Institute, Harvard, Rice, Caltech and Northwestern and ranks ahead of MIT, the University of California, Berkeley and Stanford.

This ranking is based on scholarly papers published and cited between January of 2001 and April of 2011 in more than 500 Thomson Reuters-indexed journals representing the range of subfields in chemistry. The listings derive from the Essential Science Indicators, a database within the Thomson Reuters Web of Knowledge platform.

According to the study, “In particular, citation analysis provides authority in reflecting the judgments that scientists themselves make in acknowledging the published research that they view as the most significant and useful.”

The findings are fully consistent with the other impact assessments based on relative numbers of Nature and Science papers, that have been circulating in the past few years and have been highly favorable to ASU.

“The department is clearly growing dramatically in both size and international stature,” said William T. Petuskey, chair of the department of chemistry and biochemistry in the College of Liberal Arts and Sciences. “Since 2002, we have more than quadrupled the number of undergraduate majors and nearly tripled our external research funding, both of which indicate our increased activity level.”

Petuskey adds, “What is interesting about this ranking is that it is based entirely on publications that have appeared in chemistry journals.  It doesn’t include the substantial body of work that department members have chosen to publish in journals of physics, materials science, and other technical disciplines. Chemistry and biochemistry are truly integral to most of the science and engineering initiatives in play at ASU.

We are striving to meet President Crow’s dual initiatives of increased accessibility and improvement in the quality of our instructional and research programs. With this sixth place ranking, especially among such an elite group of universities, and along with the exciting recognition that our students and faculty members are receiving, we feel that we are making considerable progress in meeting these goals. We look forward to the continuing challenge in improving on these accomplishments.”