In the fight to improve global health, alleviate hunger, raise living standards and empower women in the developing world, chickens have an important role to play.

Jagdev Sharma, a researcher at the Center for Infectious Diseases and Vaccinology at Arizona State University’s Biodesign Institute, has been investigating the advantages of a more productive species of chicken for villagers in rural Uganda. He reports his findings this week at the American Verterinary Medical Association Meeting in St. Louis. 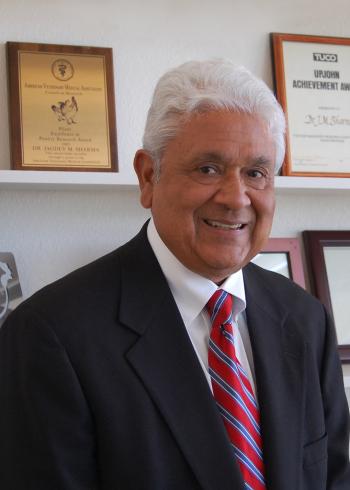 The star of this developing story is a type of chicken known as the Kuroiler. As Sharma notes, it has already shown enormous promise in lifting villagers out of the cycle of economic poverty and nutritional stress in some of the poorest regions:

“The success of the Kuroiler chicken in India, where it was first introduced, makes us hopeful for similar improvements in rural Africa, particularly, in Uganda, where our initial results show the Kuroiler significantly outperforming native chickens.”

Kuroilers are hybrid chickens, well suited to resource-poor village environments. They have been genetically selected to provide both meat and eggs and are able to survive and thrive on agricultural and household waste, requiring no additional feed.

The birds were developed by Keggfarms, a company based in Gurgaon, India and known for its pioneering efforts to improve rural conditions and provide nutritional security through household poultry keeping. Kuroilers were distributed in India to over 1 million households.

Women in rural locales in Africa (as well as India) are often responsible for raising chickens, which supply meat and eggs, as well as providing a vital source of income. Sharma is hoping to duplicate the Indian success story with Kuroilers in Africa, thanks to collaboration between Arizona State University and the Government of Uganda.

Chickens and their eggs are a vital source of nutrition in Uganda, with about 33 million birds produced annually. Of these, the majority – around 28.4 million – are village flocks, with the remaining 4.6 million coming from commercial sources.

Village chicken flocks typically consist of 5-20 chickens per family. As Sharma notes however, such flocks are often insufficient to meet the nutritional and economic needs of village families. Indigenous chickens have a mortality rate of 40-80 percent. Native hens only produce around 40 eggs per year, while roosters provide limited sources of meat, weighing on average 1.5-2.0 kg.

Sharma and his group explored the performance of indigenous chickens, comparing them with the newly introduced Kuroilers. The new chickens are similar to indigenous chickens in terms of their feather colors for camouflage, agility in escaping predators and resistance to disease. Kuroilers differ however in other important features, including their hatchability, adult weight and number of eggs produced.

The fertility and hatchability of Kuroiler eggs was significantly better than for native eggs, with 80 percent of Kuroilers successfully hatching compared with 47 percent of native eggs. Further, in four districts in Uganda where farmers received Kuroilers, the chickens showed a survival rate of 84 percent, comparable to that of indigenous birds. Body weight gain for Kuroilers was significantly higher as was their total body weight in adulthood – 3kg for male Kuroilers as opposed to 1.5-2.0 for native male chickens.

The most dramatic advantage of the Kuroilers however was their egg laying capacity, which outpaced native species in both village-scavenging settings and for chickens raised in confinement.  Kuroilers delivered around 200 eggs annually compared with 40 for native species.

Sharma is hopeful that government and private contributions to the successful Kuroiler project will significantly extend the reach of this initiative, improving village conditions in many other areas of Africa, where poverty and deprivation remain common.

The possible fire in the Engineering Research Center is all clear and the building is open.

The possible fire in the Engineering Research Center, 551 E. Tyler Mall on ASU's Tempe campus, is all clear. The building is open.