Research at Arizona State University to better understand the intricate sensory and cognitive connections between the brain and the hands has won support from the National Science Foundation. New discoveries about such connections could benefit people with neurological disorders such as Parkinson’s disease and cerebral palsy, and those who need prosthetic hands.

The NSF has awarded a $640,000 grant to fund a research collaboration between Marco Santello, an ASU professor of biomedical engineering, and Columbia University scientist Andrew Gordon to expand their studies in this area. 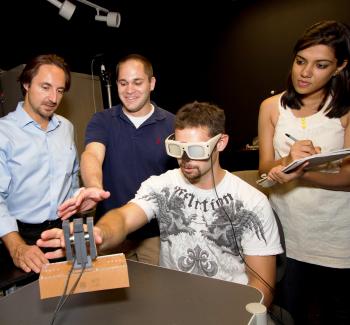 Santello also is interim director of the School of Biological and Health Systems Engineering, one of ASU’s Ira A. Fulton Schools of Engineering. Gordon is a professor of movement science in the Behavioral Science department in Columbia’s Teachers College, where he coordinates the Kinesiology program.

The two have worked together for several years in pursuit of deeper knowledge about interactions between sensory feedback and motor actions involved in control of the hand.

In their current project they’re seeking to determine the neural mechanisms that control learning and planning of the grasping and manipulation of objects. They’re examining the visual cues people use to assess object properties before they grasp or otherwise manipulate objects. In addition to using cues such as object shape or density, people often use memory of similar actions performed in the past.

“We can pick up these cues, and we can predict the result of our actions on an object, but we don’t know exactly how the brain does this,” Santello says.

Santello's focus is on neural control of the hand and the workings of senses such as vision and touch. By manipulating these senses in people with normal brain, hand and muscle functions, Santello studies what causes the performance of an action that is easy under normal conditions to become difficult. This allows him to identify what impact a specific sense has on how the brain controls the hands.

In his experiments, he imposes sensory deficits on test subjects, using goggles to block vision at selected times during the manipulation to interfere with the subjects’ abilities to learn and execute grasping tasks. “We want to understand what aspects of visual feedback help the brain to successfully control grasping of an object and store a memory representation of that action,” he explains.

Gordon’s does cerebral palsy research. His related collaborative work with Santello focuses on cognitive aspects of the interaction between the brain and the hands, assessing the information the brain gains and processes from sensing the shapes of objects and exploring the role of memory of past actions.

“It’s important to discern the basic mechanisms of storing the memory of recently performed actions, of planning future actions and integrating sensory feedback in healthy individuals, so that we might be better able to understand and treat neurological or musculoskeletal disorders,” Santello says.

“In particular, understanding how we integrate ‘what we know’ from prior  manipulations with an object and ‘what we see’ is crucial.” Gordon says. “This is all the more important when our senses, and thus our ability to create sensory memories, is impaired, as is often the case in cerebral palsy.”

Knowledge gained by such research can also be applied to improving neuroprosthetics. Current technology is able to provide extremely sophisticated artificial hands, but controlling the hands remains a challenge.

“The more we understand about the high- level processing that the brain has to go through to plan an action, the closer we will be to building more intelligent prosthetic systems that are capable of more human-like performance,” Santello says.

Like Gordon, Santello has expertise in kinesiology – the study of movement – with a focus on kinematics of the hand, involving how the hand is shaped and how it performs grasping and related actions.

In the past eight years, they have expanded research into the workings of physical motor skills by incorporating recent advances in knowledge of biomechanics, neurophysiology and psychology. Santello and Gordon now examine not only how objects are grasped, but look at why people choose to grasp an object in the ways they do.

By taking decision-making functions into account, they’re trying to  provide a more comprehensive view of the brain-hand relationship  – how, for instance, the brain and hand work together to  create a memory of the position and force necessary to manipulate particular objects.

The proposal submitted by Santello and Gordon for the research grant was among only about 10 percent of the 120 proposals recently approved for new funding by the Perception, Action and Cognition Advisory Panel, which is under the NSF’s Division of Behavioral and Cognitive Sciences.

“It is extremely exciting, not only because it was very competitive,” Santello says, “but also because we are really passionate about improving our understanding of how the brain controls complex movements.”

'Future of Food' to focus on health of humans, land

Arizona's food supply is among the most vulnerable with respect to water scarcity and climate change, says Gary Paul Nabhan, who will discuss the future of food April 2.

'Future of Food' to focus on health of humans, land

The future of food is not just a natural resource issue but a social one. How we are able to "think like a foodshed" over the next half century to prioritize human community health and land health is of great significance, according to an upcoming lecture sponsored by the Institute for Humanities Research.

"The Future of Food: In the Desert and Beyond" will be the subject of a talk given by Gary Paul Nabhan, the Kellogg Endowed Chair in Borderlands Food and Water Security at the University of Arizona Southwest Center, from 5:30 to 7 p.m., April 2, in Wrigley Hall on the Tempe campus. 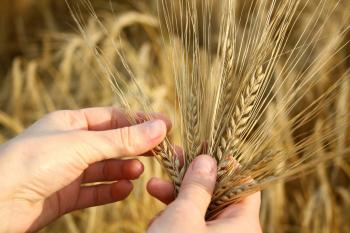 According to Nabhan, planning for a more equitable food and water future for Arizona's rural and urban poor should be at the top of every list for social and environmental activists, as the state's food supply is among the most vulnerable with respect to water scarcity and climate change.

"The technical quest to feed nine million people on this planet has focused on stretching the carrying capacity of our food production systems rather than paying attention to the social issues related to 'caring capacity,'" reads the summary to Nabhan's upcoming talk. "This may be particularly true in the borderlands, which feature some of America's most important food ports of entry at the same time that border counties' levels of poverty and food insecurity are twice the national average."

Nabhan was named by Utne Reader as one of 12 innovators who made the world a better place in 2011, and has received two honorary degrees for his role as a pioneer in the local food movement. Founder of Native Seeds/SEARCH, Renewing America's Food Traditions and the Forgotten Pollinators Campaign, he farms heritage grains, legumes and heirloom fruits in Santa Cruz County.

His 25th book, "Desert Terroir: Exploring Unique Flavors and Sundry Places of the Borderlands," will be released in March from University of Texas Press, and will be available for purchase at the event.

To RSVP for The Future of Food, click here.