Neanderthal demise due to many influences, including cultural changes

As an ice age crept upon them thousands of years ago, Neanderthals and modern human ancestors expanded their territory ranges across Asia and Europe to adapt to the changing environment.

In the process, they encountered each other.

Although many anthropologists believe that modern human ancestors “wiped out” Neanderthals, it’s more likely that Neanderthals were integrated into the human gene pool thousands of years ago during the Tarantian (Upper) Pleistocene era as cultural and climatic forces brought the two groups together, according to C. Michael Barton, a professor in the School of Human Evolution and Social Change and the director of the Center for Social Dynamics and Complexity.

“The traditional story in textbooks doesn’t fit well with what we know about hunter-gatherers. For the most part, they don’t like to go far from home. It’s dangerous,” Barton said.

Barton and Julien Riel-Salvatore, of the University of Colorado Denver, present new research in the journal Advances in Complex Systems that show the Neanderthals' demise was due to a combination of influences, including cultural changes. The paper, titled "Agents of Change: Modeling Biocultural Evolution in Upper Pleistocene Western Eurasia," appears online in January. It builds on work published last year in the journal Human Ecology and on recent genetic studies that show a Neanderthal contribution to the modern human genome.

“How a culture’s working knowledge is passed on is as important as biological information for human evolution,” Barton said. “There is a perception that biological evolution determines culture during the Pleistocene era and that cultural influences predominate afterwards (including today). The reality is that the two forces have been working together and they were as important 50,000 years ago as they are today.”

The researchers used archaeological data to track cultural and socio-ecological changes in behavior in Western Eurasia during the past 120,000 years. As Neanderthals and early humans land-use patterns shifted during the last ice age, computer modeling revealed that the two populations began to interact and mate, leading to the “extinction” of one of the groups due to hybridization – a well-recognized phenomenon in conservation biology. Neanderthals were limited to western Eurasia, and usually it is the smaller population that becomes “extinct” in this way. Nevertheless, succeeding hybrid populations still carry genes from the regional group that disappeared, according to the researchers.

To address the possibility that the two groups would not have seen one another as potential mates, the researchers also examined the possible impacts of social barriers to mating in their models. They found that unless social taboos were nearly 100 percent effective, it would have not made any difference in outcomes over time as the gene pools mixed, Barton said.

“This is one of the first attempts to explicitly address the impact of various degrees of social avoidance on possible hybridization between the two groups,” added Riel-Salvatore, who earned his doctoral degree in anthropology from the School of Human Evolution and Social Change at ASU.

“Other than the fact that they disappeared, there is no evidence that Neanderthals were any less fit as hunter-gatherers of the late Pleistocene than any other human ancestor living at that time. It looks like they were as capable as anyone else,” Barton said.

Barton and Riel-Salvatore studied the stone artifacts that were left behind by these ancient peoples to track the movement patterns among hunter-gatherers across western Eurasia during the Pleistocene era.

“Stone technology is completely different than the kind of technology we have today,” Barton said. “But it can tell us important things about land use, how people organized themselves and how they moved to access resources to live.”

These tools provide insight into Neanderthals’ lives and gene sequencing tells the story of their legacy.

“Recent sequencing of ancient Neanderthal DNA indicates that Neanderthal genes make up from 1 to 4 percent of the genome of modern populations – especially those of European descent,” Riel-Salvatore said. “While they disappeared as a distinctive form of humanity, they live on in our genes. What we do in this study is propose one model of how this could have happened and show that behavioral decisions were probably instrumental in this process.”

The researchers suggest it’s time to study variation and diversity among individuals rather than classify them into types or species.

“Neanderthals’ legacy lives on in our biological genome and possibly in our cultural knowledge,” Barton added. “There may have been may other populations like Neanderthals who were integrated into a global human species in the Late Pleistocene. We’re the results.”

This semester, students and faculty from The Design School teamed up with Waste Management to showcase the company's sustainability efforts at the 2012 Phoenix Open.

The idea for a four-hole miniature golf installation at the annual Phoenix Open golf tournament began two years ago in Berlin when Darren Petrucci, director of The Design School, was taken to a rooftop building putt-putt course and handed a golf club.

The 18-hole miniature golf course had the element of pure fun that Petrucci wanted to inject into a project for ASU Herberger Institute architecture and design students. 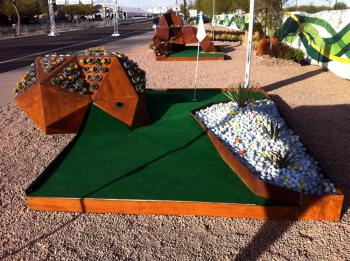 When Petrucci returned to the Tempe campus, The Design School faculty embraced the idea and expanded it to include one of professional golf’s premiere tournaments: the Waste Management Phoenix Open at the TPC golf course in Scottsdale.

This semester an estimated 30 students and faculty from The Design School’s architecture, landscape architecture and design disciplines teamed up with Waste Management, the sponsor of the Phoenix Open, to showcase the Houston-based company’s sustainability efforts at the 2012 Phoenix Open.

Students designed four holes that each featured one of the company’s sustainability initiatives, from the use of nonpotable water and recycling plastic cups to solar power and the reuse of materials.

Avid golfers on the project made sure that each hole presented a putting challenge.

The four-hole installation was prominently displayed at the 2012 Waste Management Phoenix Open, attended by more than 500,000 tournament-goers.

The interactive display provided visitors with a chance to try their skills at a hole in one and, at the same time, learn about Waste Management’s sustainability initiatives and Arizona’s four ecosystems.

The project took an estimated five months, over the span of two semesters, from conception and design to installation.

The miniature golf project showcased “what we are capable of as a group of multi-discipline designers,’’ said Christopher Lasch, a lecturer in The Design School and one of the project’s lead faculty members.

In recognition of its appreciation, Waste Management donated $10,000 in scholarships to the student participants.

“Waste Management is extremely pleased with the innovative ways The Design School at Arizona State University showcased some of our sustainability and charitable initiatives to all of the tournament fans through an interactive game of miniature golf at the 2012 Waste Management Phoenix Open,” said Dave Aardsma, chief sales and marketing officer for Waste Management.

At the close of the Phoenix Open, the miniature golf installation will be on display as part of Emerge, an event scheduled to take place March 1-3, at Neeb Plaza, on the Tempe campus, where nationally known artists and scientists will join with ASU faculty and students to explore emerging technologies and the futures they promise.