How do Native American tribes develop their lands for economic gain, yet still try to maintain their native culture?

This will be the topic of a free lecture from 1 to 2 p.m., Nov. 5, at Arizona State University’s Deer Valley Rock Art Center, 3711 W. Deer Valley Road, Phoenix. 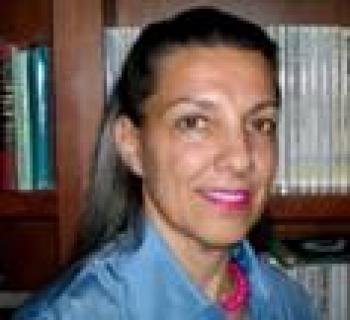 The speaker will be archaeologist Barbara Jaquay, Her lecture is titled “The Changing Economic Resources on Arizona’s Indian Reservations.”

“Other tribal lands must continue to develop their natural resources to attract real dollar inflow to the community and to provide jobs to tribal members. Outdoor recreational activities of camping, fishing, and hiking will always attract the outdoor enthusiast, but the economic gain is low in comparison to tribal lands near metropolitan areas which can lease their land for economic gain or build gaming facilities.”

Jaquay has traveled to more than 40 countries on six continents to study archaeology and history. She has written about Middle America and Arizona Native Americans, and is currently working on projects and ublications aobut Arizona, funky/folk art, Easter Island, Machu Picchu and the Cumberland National Road.

The lecture is made possible by the Arizona Humanities Council. Seating is limited; first come, first serve.

The Deer Valley Rock Art Center has the largest concentration of Native American petroglyphs in the Phoenix Valley. Visitors hike a quarter-mile trail to view more than 1,500 petroglyphs made between 500 and 7,000 years ago. The museum aims to promote preservation, connection and respect for the site and is a destination for families to learn about archaeology in their own backyard. The Center is managed by one of the top archaeology programs in the country – the School of Human Evolution and Social Change, in the College of Liberal Arts and Sciences at Arizona State University.

Sixteen students will compete in the final rounds of the ASU Academic Bowl tonight on the Downtown Phoenix campus.

Sixteen students will compete in the semi-final rounds of the ASU Academic Bowl tonight on the Downtown Phoenix campus. Of those, eight students will advance to the finals, scheduled for tonight as well.

Although there is $24,000 in scholarship money for the winners and the runners-up, there is only one trophy, one championship title. 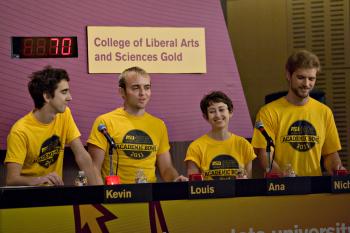 John Ernzen, Ethan Holhouser, Eric Lehnhardt and Joe Yu have carefully engineered their way to the semi-finals, which should come as no surprise to anyone. The team displays a keen understanding of how the game is played and a vast array of knowledge – including an unexpected aptitude for literature and the arts.

As engineers, they are born problem-solvers, but can they crack the code of how to get to the finals? This talented team just might have what it takes.

Brady Gilg, Alex Theisen, Marko Manojlovic and Christopher Chesny comprise this tough-as-nails team that likes to get things done – and fast. With their game faces on, these seriously academic players typically have dominated each match as they go from question to question to question, and waste no time (or points) with wrong answers.

In other words, give them an inch and they might just have you beat before you can even buzz in.

The suits: Eric Rosano, Dustin Brown, Kenneth Qian and Mitchell Andreas. They're here for business – or is it pleasure? It's hard to tell. The team is looking to win, but they might just be having fun while doing it. (When introducing himself, Qian sarcastically said he was from Hogwarts, as evidenced by his tie that resembled that of Harry Potter's.)

All jokes aside, this team makes smart decisions in how they play the game, and you can bet they've already assessed what they can bring to the table.

This adorable, bright-eyed team might look harmless, but you better look again. Beneath their sweet smiles and worried expressions are the complex, encyclopedic workings of robots that are hard-wired for combat.

Returning Academic Bowl champions, Nicholas Williams, Ana Ordonez, Louis Weimer and Kevin Coltin are a merciless force to be reckoned with, however gentle their group hugs might make them appear. In other words, don't be fooled by the warm and fuzzy CLAS Gold players – they are the team to beat.

What to look out for

• The W. P. Carey Business team has employed a creative tactic of placing their hands over the microphones during bonus questions, in an effort to counter the urge to impulsively call out an answer before conferring.

• All the players competing in the semi-finals are not just smart, they're whip-smart. They're quick to buzz in and win the toss-up questions – a key strategy that not only leads to points, but allows a team to take control of the game by answering a series of bonus questions as fast, or as slow, as they would like. Because all four teams have proven their abilities in this area, it will be interesting to see how they shift their strategies when confronted with equally aggressive competition.

• Practicing restraint also will be a key strategy, as players often buzz in before the moderator has finished posing the question and then they deliver an incorrect answer.

The semi-finals begin at 7 p.m., in the Eight, Arizona PBS studio of the Cronkite building, on the Downtown Phoenix campus. After two teams are eliminated, the finals will take place, estimated to begin around 8:30 p.m.

If you can't make it downtown, then follow the action live via Twitter: @asunews_insider or via live webcast at asu.edu/academicbowl or ustream.tv/channel/asutv.

For schedule and roster information, and much more, visit asu.edu/academicbowl.