Arizona State University has been selected by NASA to design, deliver and oversee a pair of color panoramic zoom cameras on the next rover mission to be launched to the surface of Mars in 2020. Jim Bell, a professor in ASU’s School of Earth and Space Exploration, will be the principal investigator overseeing the Mastcam-Z imaging investigation. 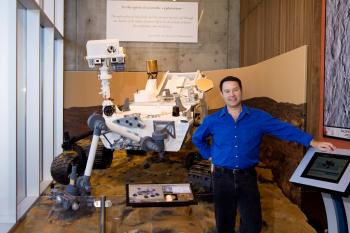 The Mars 2020 rover will be designed to seek signs of past life on Mars, to collect and store samples that could be returned to Earth in the future, and to test new technology to benefit future robotic and human exploration of Mars. The instruments onboard will help to build upon the many discoveries from the Curiosity Mars rover and the two Mars Exploration Rovers (Spirit and Opportunity), and will be the critical next step in NASA’s strategic program of exploring the Red Planet.

Bell will oversee an international science team responsible for creating and operating the cameras on NASA’s next, yet-to-be-named, Mars rover. Bell has been responsible for the science imaging systems onboard the NASA Mars Exploration Rovers Spirit and Opportunity, and is the deputy P.I. of the color cameras on the Curiosity rover.

“These cameras will be the main eyes of NASA’s next rover,” says Bell.

The imaging system ASU will deliver is a pair of multispectral, stereoscopic cameras that will be an enhanced descendant of Curiosity’s successful imaging instrument called Mastcam. Mastcam-Z will be comprised of two zoom camera heads to be mounted on the rover’s remote sensing mast. This matched pair of zoom cameras will each provide broad-band red/green/blue (RGB) color imaging, as well as narrow-band visible to short-wave near-infrared multispectral capability.

Mastcam-Z will have all of the capabilities of Curiosity’s imaging instrument, but is augmented by a 3.6:1 zoom feature capable of resolving features about 1 millimeter in size in the near field, and about 3-4 centimeters in size at 100 meter distance.

“The cameras that we will build and use on Mars are based on Curiosity’s cameras but with enhanced capabilities,” explains Bell. “Specifically, we will be able to use our zoom capability to allow us to play a much more significant role in rover driving and target selection.”

Mastcam-Z’s imaging will permit the science team to piece together the geologic history of the site – the stratigraphy of rock outcrops and the regolith, as well as to constrain the types of rocks present. The cameras also will document dynamic processes and events via video (such as dust devils, cloud motions and astronomical phenomena, as well as activities related to driving, sampling and caching), observe the atmosphere and contribute to rover navigation and target selection for investigations by the coring/caching system, as well as other instruments.

Bell’s large international science team will include Mark Robinson, School of Earth and Space Exploration professor and principal investigator for the imaging system on board NASA’s Lunar Reconnaissance Orbiter Camera. Robinson brings significant experience in planetary geology and spacecraft imaging, and will be responsible for characterizing the regolith from Mastcam‐Z images and assisting with camera calibration and mission operations.

In addition, Bell intends to involve a significant number of staff, undergraduate students and graduate students in the mission. For example, SESE Research Scientist Craig Hardgrove and Technology Support Analyst Austin Godber are slated to play leading roles in the design, testing and operations of the Mastcam-Z investigation.

Mastcam-Z remote instrument operations will be directed from the ASU Science Operations Center (SOC), housed in the Mission Operations Center located in the Interdisciplinary Science and Technology Building IV on the ASU campus. ASU faculty, staff and students will work closely with mission engineering leads at NASA's Jet Propulsion Laboratory in Pasadena, California.

“We are very excited about playing such a critical role in NASA’s next Mars rover. And we are especially excited because this rover will be the first step in NASA’s Mars rover sample return mission,” says Bell. “We are eager to play a role in the selection of the first Martian samples for eventual return to Earth.”

Teri Pipe, dean of Arizona State University’s College of Nursing & Health Innovation, has been named one of just 20 Robert Wood Johnson Foundation (RWJF) Executive Nurse Fellows for 2014. Pipe joins a select group of nurses from across the country chosen to participate in the final cohort of this world-class, three-year leadership development program that is enhancing the effectiveness of nurse leaders who are working to improve the United States health care system.

Pipe is an expert on nursing leadership with a focus on interprofessionalism, bringing nurses together with physicians and other health professionals, business people and policymakers, to help redesign and improve health in the United States. She is also an expert on mindfulness, which is an approach to help people increase their ability to perform by being fully present and in the moment. Her research interests include resilience in professional and clinical populations, health promotion and wellness, positive coping and stress management, oncology and gerontology. 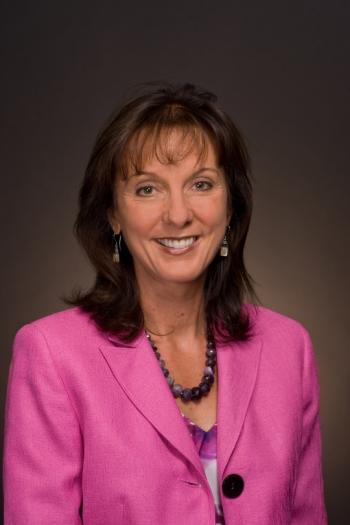 Begun by the foundation in 1998, the Executive Nurse Fellows program strengthens the leadership capacity of nurses who aspire to shape health care in their communities, states and nationally. The program will provide Pipe and her colleagues with coaching, education and other support to strengthen their abilities to lead teams and organizations working to improve health and health care. The program is located at the Center for Creative Leadership and co-directed by Linda Cronenwett, dean emeritus and professor at the School of Nursing at the University of North Carolina at Chapel Hill; and David Altman, executive vice president and managing director at the Center for Creative Leadership.

“At this moment, when the role of nurses in providing care and promoting health is expanding, and our country’s health care system is being transformed, we need nurse leaders with the strongest skills possible,” Cronenwett said. “The RWJF Executive Nurse Fellows program is enhancing the leadership skills of talented nurses all across the country. Our alumni are a virtual ‘who’s who’ of accomplished, prestigious nurses, and we know that Teri Pipe and the other members of the 2014 RWJF Executive Nurse Fellows cohort will do a tremendous amount to improve health care and build a culture of health in the United States.”

“I am honored to participate in this important program, and am passionate about making the most of this opportunity to make positive change in the health of our communities across the United States,” Pipe said. “It is exhilarating to have this chance to strengthen leadership capacity in nursing and health. I look forward to learning with and from the other fellows involved in this important endeavor.”

Executive Nurse Fellows hold senior leadership positions in health services, scientific and academic organizations, public health and community-based organizations or systems, and professional, governmental and policy organizations. They continue in their current positions during their fellowships, and each develops, plans and implements a new initiative to improve health care delivery in her or his community.

The fellowship is supported through a grant from the Robert Wood Johnson Foundation.

For more information about the program, visit: www.ExecutiveNurseFellows.org.