A nanotech fix for nicotine dependence

A chemical component present in the nightshade family of plants is one of the world’s most tenaciously addictive substances. It is the nicotine contained in tobacco and found in high concentrations in cigarettes. Smoking remains a global scourge; in the U.S. it is the leading source of preventable death.

Yung Chang and her colleagues at Arizona State University’s Biodesign Institute have launched an ambitious new project, designed to attack nicotine dependence in a radically new way. The research effort, pursued under a new $3.3 million grant from the National Institute of Drug Abuse, will attempt to design a vaccine conferring immunity to nicotine, using nanoscale structures assembled from DNA. 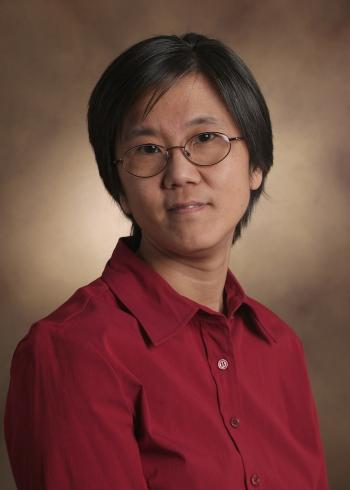 “The DNA nanostructure enables rational design and construction of synthetic vaccines, because of its precision control over the placement of various antigenic components,” Chang says. “This approach may offer a new strategy to improve the efficacy of many different vaccines.”

Chang, an immunologist, has been developing a method for incorporating key vaccine components onto self-assembling, nanoscale carrier molecules. She has worked on honing the technique along with nanotechnology innovator Hao Yan, a researcher at Biodesign’s Center for Single-Molecule Biophysics who holds the Milton D. Glick Distinguished Chair in the Department of Chemistry and Biochemistry.

Joining the interdisciplinary team are ASU researchers in the fields of immunology, organic and DNA structural chemistry (Sidney Hecht) and bioinformatics (Li Liu and Sudhir Kumar), as well as specialists in the pharmacology of nicotine dependence from the University of Minnesota, led by professors Paul Pentel and Mark LeSage.

By the end of the three-year project, the group hopes to identify promising candidates for a new nicotine vaccine and advance them toward Investigational New Drug submission. The researchers emphasize that if their DNA nanotechnology approach proves successful, it could plausibly be applied to the development of future vaccines against any target of interest, including other drugs of abuse, infectious agents or tumor antigens, thereby opening an entirely new chapter in vaccine development.

In the universe of addictive drugs, nicotine reigns supreme in terms of the numbers of people affected. In the U.S. alone, cigarette smoking causes some 443,000 fatalities per year – exacting a greater human toll than the human immunodeficiency virus (HIV), illegal drug use, alcohol use, motor vehicle injuries, suicides and murders combined, according to the Center for Disease Control.

While various elements in cigarettes and other tobacco products account for their severe adverse health effects (including coronary heart disease, stroke, vascular disease, peptic ulcers, chronic lung diseases and lung cancer, and fetal brain damage and morbidity), it is the nicotine that produces potent dependency.

Existing methods – from patches to 12-step programs and chewing gum to experimental drugs – have been explored in efforts to curb nicotine dependence but the results have been less than stellar. One reason the addictive cycle is notoriously difficult to break is that only a single slip-up in abstinence from smoking is sufficient to re-infuse the brain with enough nicotine to reestablish cravings and drug-seeking behavior.

Innovative efforts have been under way for over 30 years to harness the body’s immune system to combat various drug addictions, including nicotine. The basic idea is to stimulate an immune response that would recruit antibodies capable of binding with nicotine. In this way, most or all ingested nicotine molecules would remain sequestered in the bloodstream, incapable of reaching their targets in the brain, thereby stripping them of their addictive capacity.

The approach thus far has met with mixed results. Though animal studies and human trials have demonstrated a clear correlation between high levels of nicotine antibodies and reduced nicotine dependence, vaccine effectiveness in inducing abstinence has so far been disappointing. Arranging vaccine components in just such a way as to target the immune system’s B cells, bind with them, enter the cellular interior and induce effective immunity remains a significant challenge.

The technique under study accomplishes this feat through the rational arrangement of vaccine components onto nanoscale structures, using the base-pairing properties of DNA – the biological carrier of the genetic code. The Yan lab has been on forefront of the design and fabrication of elaborate 2-D and 3-D DNA nanostructures and the rapidly advancing field is poised to enter the biomedical arena.

The use of programmable DNA nanostructures provides high precision and delicate control over the vaccine’s essential ingredients, potentially improving immunogenicity, efficacy and safety. Chang and her group will fabricate three different candidate DNA nanostructures as platforms for the vaccine’s active constituents. Two of these will be nanostructures comprising 8-arm and 12-arm branched DNA scaffolds, while the third is a DNA tetrahedral structure (see Figure 1).

Attached to each of these nanostructures will be several crucial vaccine components:

•  Nicotine particles known as haptens will stud the nanostructure, acting to provoke an immune response. Haptens are small molecules capable of binding with antibodies.

• An adjuvant will attach to the DNA structure. Adjuvants are additives commonly used in vaccines to improve their immunogenicity. The adjuvant applied in this case is known as CpG ODN—recognized in prior research as a strong stimulator of B cell activity.

• T-helper epitopes will complete the vaccine structure. These are antigen components recognized by the immune system and necessary for the recruitment of helper T cells, which work in conjunction with B cells to generate antibodies to a target antigen.

The techniques of DNA nanotechnology being pursued, many of them developed in the Yan lab, allow for precision fine-tuning of nicotine haptens, adjuvants and T-helper epitopes, as well as the DNA platforms these constituents reside on in the candidate vaccine.

The proper display of nicotine on the DNA surface in particular is critical for the process of recognition by nicotine-specific B cells of the immune system. The tetrahedral DNA structure contains up to 36 discreet positions for NIC: Th-epitope:adjuvant complexes. Should greater density of nicotine haptens, epitopes or adjuvants  be required, an alternate technique – known as DNA origami – may be used, providing up to 90 sites for antigenic components.

Further, the self-assembling nanoscaffolds can be fabricated in a high-throughput fashion with high reproducibility. The researchers believe the completed vaccine candidates will more faithfully mimic naturally occurring immune cascades, producing a more effective vaccine. For this to occur however, the vaccine structure must be internalized into the cell. This activity will be monitored through the use of fluorescent dyes, which can tag molecules for microscopy.

For each of the three DNA nanostructures under investigation, two different adjuvants will be tested, along with one non-immunization control. The ratios of hapten, adjuvant and epitope will also be varied and tested for immunogenicity on a trial and error basis. The vaccine candidates will first be evaluated in a mouse model, with the most successful being tested in rats.

In addition to measuring blood and brain levels of nicotine following vaccination, the test subjects will be evaluated for the self-administration of nicotine, which is considered the gold standard in terms of vaccine effectiveness.

With combined effort from a multidicsplinary team, the group’s aim is to identify two to three vaccine candidates that can be moved toward further clinical testing.

ASU is embarking on a long-term collaboration with an aerospace and defense industry leader that will encompass research, education and workforce development efforts, and job opportunities for students.

Long-term collaborations spanning a range of research and education efforts, engineering projects, workforce development and philanthropic activities are among goals set forth in an agreement between Arizona State University and Aerojet Rocketdyne, a subsidiary of GenCorp, to take effect July 1.

The agreement seeks to establish working relationships partnering Aerojet Rocketdyne with faculty and students of ASU’s Ira A. Fulton Schools of Engineering. 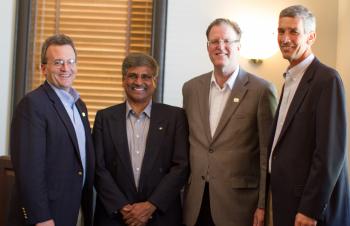 The Ira A. Fulton Schools of Engineering has an enrollment of about 9,000 students and more than 230 faculty members teaching and pursuing research across a full spectrum of engineering disciplines.

Under the agreement, the engineering schools will provide continuing education and professional development opportunities for Aerojet Rocketdyne employees. Some of the training may be provided through the Supply Chain Management program, a collaboration of ASU’s engineering schools and W. P. Carey School of Business.

The agreement also provides for ASU to serve as a source for new employees and student interns for the company, and to provide access to research by faculty and graduate students in Aerojet Rocketdyne’s areas of interest.

The two parties are to team in efforts to develop proposals for funding of research projects and to share information through active membership on advisory boards of various university and company programs.

Aerojet Rocketdyne will also collaborate with the Fulton Schools’ Engineering Career Center to support students. The company will participate in the center’s career fairs and develop and implement an Aerojet Rocketdyne Student Co-op Program. It will also sponsor student scholarships and fellowships.

“Our industry-defining leaders and engineers plan to engage with students and faculty members on all levels to wholly support the student rocket club, provide leadership on advisory boards and actively recruit ASU’s high-caliber interns and graduates,” Boley said. “In turn, we look forward to taking full advantage of ASU’s unique research and technology capabilities, and its professional development opportunities for our employees. This truly is a mutually beneficial relationship we anticipate sustaining over the long-term.”

“We are excited to be launching this comprehensive partnership with Aerojet Rocketdyne,” said Paul Johnson, dean of the Ira A. Fulton Schools of Engineering. “They are rapidly evolving, they have dynamic and visionary leadership and their future success requires an innovative and entrepreneurial workforce. They develop and provide technology and systems that are critical to the security of the United States. It is a company many of our graduates will be attracted to and proud to work for, and our faculty will enjoy collaborating with the company’s technology leaders.”

Johnson said the collaboration agreement establishes “an especially powerful partnership founded on the credibility earned by our faculty through previous interactions with Aerojet Rocketdyne and the complementary alignment of our aspirations. We look forward to the deepening of the relationship and the joint pursuit of new opportunities.”

The relationship will extend beyond ASU’s engineering schools to include at least one joint engineering/business program in the W. P. Carey School of Business.

"ASU’s Supply Chain Management program is ranked number three in the country and we will continue to utilize both the school of business and the engineering schools to provide our employees specialized training in operational excellence," said Aerojet Rocketdyne’s vice president of supply chain materiel management Hal Martin, who was instrumental in forging the new ASU-Aerojet Rocketdyne partnership. Martin helped ASU develop its current supply chain management curriculum in 2001.

ASU and Aerojet Rocketdyne signed the partnership agreement on June 27 at the university’s Tempe campus.