The Music Therapy Community Music and Wellness program in the ASU School of Music is partnering with the Tempe chapter of Guitars for Vets, Inc., a nonprofit organization with 30 chapters nationally, to enhance the lives of ailing and injured military veterans by providing them with guitars and music instruction.

Music therapy faculty, graduate and veteran undergraduate students, and alumni are collaborating with the local chapter to provide a 10-week program that incorporates a board-certified music therapist from the School of Music faculty. 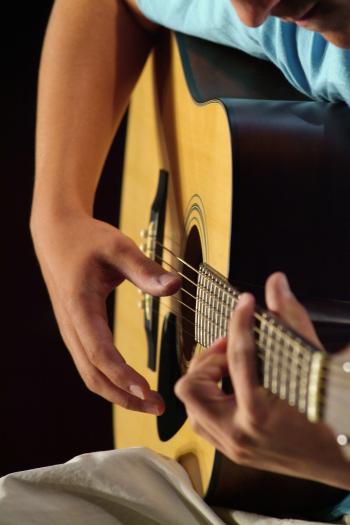 In its inaugural semester, a group of six veterans meets each week on the ASU Tempe campus to practice their musical skills, talk about any problems they want to share and sing songs they are learning. As they build musical skills and relationships, they find new ways to cope with issues of stress and improve their quality of life following military service.

Objectives for participants include: relieving stress through interaction with the group and the musical experience; acquiring skills which lead to self-guided guitar-playing and improved ability to cope with emotional, physical and social issues related to deployment; and establishing and maintaining involvement with a growing supportive community that meets through interactive music and social events. At the end of the program, participants receive a certificate of completion and a guitar so that they may continue playing and learning.

“The group has just taken off! Everyone is learning and it’s a safe place for the group members to share concerns about any troubles they may be facing,” said Robin Rio, associate professor of music therapy and director of the Music Therapy Clinic in the ASU School of Music. “I am thrilled to have this opportunity to bring students and veterans together right here at ASU. Music therapy helps people bond and share their love of music while increasing ability and confidence.”

This groundbreaking partnership between the ASU School of Music and Guitars for Vets is the first of its kind for the community organization. Leaders in the organization are hoping to expand the partnership into a year-long program, with the goal of starting an ASU student chapter.

ASU students and faculty actively involved in developing the Tempe Guitars for Vets Chapter include Anthony “Tony” Taddei, chapter coordinator, who holds master’s degrees in education and educational administration and is completing a certificate in Social Entrepreneurship and Community Development from the ASU College of Public Programs; Jessica Christensen, the group’s Music Therapy supervisor, who earned her Master in Music in Music Therapy from ASU in 2010; Scott Tonkinson, guitar instructor, who is a candidate for the Master in Music in Music Therapy at ASU; and, Tim McAlee, guitar instructor, who is completing his bachelor’s degree in music therapy at ASU. McAlee served in the US Army, 7th Infantry Division, Fort Ord, California, from 1989-1993, and was deployed to Egypt, Israel, Korea and Panama.

For more information about Guitars for Vets, visit guitars4vets.org. To learn more about the music therapy program in the ASU School of Music, visit music.asu.edu/musictherapy.

Join the golf tournament fundraiser hosted by the Phoenix chapter of Guitars for Vets and the music therapy program in the ASU School of Music June 14 to help raise funds and awareness for the new chapter. Learn more about the event at facebook.com/events/383693271743802.

Tucson collector gives ASU one of rarest meteorites ever found

ASU has received pieces of a meteorite that may be the first known visitor from planet Mercury.

Tucson collector gives ASU one of rarest meteorites ever found

Greenish rock found in Morocco may be first from planet Mercury

Arizona State University’s Center for Meteorite Studies recently received pieces of one of the rarest meteorites ever found. Aside from its peculiar green color, what makes this space rock so special is where it could come from: It may be the first known visitor from planet Mercury. 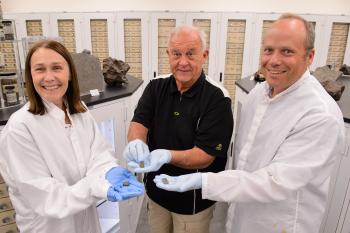 Last year, a group of 35 of these unusual space rocks was found in Morocco. Analysis suggests that the meteorite, called NWA 7325, came from Mercury, and not an asteroid or Mars. With its uncharacteristically chartreuse-green fusion crust and curious chemical composition, it does not resemble any other space rock documented by scientists.

“This unusual and precious donation is really an exciting sample and a wonderful addition to the center’s meteorite collection," said Laurence Garvie, who curates the Center for Meteorite Studies’ collection of more than 1,800 separate meteorites. "Scientists have numerous meteorites for study, more than 50,000, but every so often something new comes along that gives us new insights into our solar system. More than anything, this sample will force us to look at what would really be the defining properties of a Hermian meteorite.”

Although it has been hailed as the first meteorite from the solar system’s innermost planet, its origin is not certain.

“It is difficult, though modeling shows not impossible, to get a sample ejected from Mercury out to our orbit. Basically, Mercury is so close to the sun, it swallows up most rocks ejected from the surface by impacts,” explains Garvie.

However, based on its composition and low remnant magnetism, it is possible that it originated from the closest planet to the sun. NWA 7325 contains little iron but considerable amounts of magnesium, aluminum and calcium silicates – in line with data sent back from NASA’s MESSENGER spacecraft currently in orbit around Mercury.

Although scientists can’t say for sure where the meteorite comes from, they can say it is exceptional and very old, with an estimated age close to ~4.56 billion years. And even if this meteorite turns out not to be from Mercury, it still has properties that scientists have not observed before in a sample, and is, therefore, extremely interesting.

“CMS has a long tradition of working with private meteorite collectors for the benefit of planetary science. We are especially grateful to Fredric for his generosity in making this important contribution along with the many other valuable specimens he has donated to the center,” says Meenakshi Wadhwa, director of CMS and a professor in the School of Earth and Space Exploration.

Members of the public are invited to see this unusual sample that is now on exhibit on the second floor of ASU’s Interdisciplinary Science and Technology Building IV.