As one of the helping professions, music therapy can be highly rewarding, as well as emotionally and physically draining, says Julie Hoffer Murillo, a music therapist who is receiving a master's degree in music therapy from the School of Music at ASU’s Herberger Institute for Design and the Arts.

"After an unsatisfying career in the media, I decided to pursue this course of study to combine my passions for music and for helping people," she says. Music therapy is an amazing profession – connecting with people through music to help them function at their maximum potential, and using music as a powerful tool for learning, communicating, coping and effecting positive change." 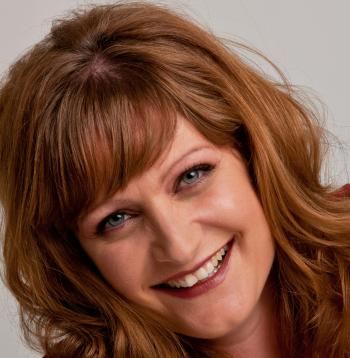 Murillo has been a practicing music therapist, working with people with varying disabilities, illnesses and special needs, since receiving a bachelor’s degree at ASU in the field in 2004. She became a lecturer and clinical training coordinator for ASU’s Music Therapy department in 2010.

"I absolutely love working as a supervisor and mentor, in tandem with the music therapy faculty," she says. "I decided to earn the master’s degree to advance my music therapy skills as a practitioner, an educator and a researcher."

The biggest challenge she faced in graduate school was managing a family and working full-time between three jobs.

"My time was very limited – most of my school work was completed while the rest of the world was asleep," she says. "It definitely affected my health and personal relationships, but I plowed through, keeping my ultimate goals at the forefront."

As with all of the helping professions, music therapists can be subject to stress and burnout. Murillo’s graduate research focused on how many music therapists engage in coping strategies to counter stress and which techniques are most often used. The most common methods of self-care reported were a healthy diet and rest, followed by recreation and leisure time with loved ones, exercise, hobbies and prayer.

Murillo believes that identifying triggers for stress and burnout and using healthy "self-care" methods can help therapists remain motivated, inspired and satisfied in their profession.

"Clients and patients who then receive therapy will experience the highest level of service from those who are self-actualized, practice wellness and are guided by a philosophy of optimal physical and mental health," she says.

Murillo’s own methods of self-care include "reading, cooking, traveling, time in nature, recreation with loved ones, giggles and snuggles with my children, and sleep. Lots of sleep!"

"When the exhaustion and burnout tried to take me over," she says, "I reminded myself of the example I was setting for my young children – that if you work hard enough, you can accomplish anything and take advantage of so many more opportunities in this unpredictable world."

At Arizona State University's Biodesign Institute, Cheryl Nickerson and her team have been investigating the intriguing effects of spaceflight on microbial pathogens.

At Arizona State University’s Biodesign Institute, Cheryl Nickerson and her team have been investigating the intriguing effects of spaceflight on microbial pathogens.

In a new paper appearing in the current issue of the journal PLOS ONE, the team reports their recent work examining spaceflight-induced responses in, and infectious disease potential of, the fungal pathogen, Candida albicans. Lead author Aurélie Crabbé joins a multi-institute collaborative research team in this study, which represents the first global gene expression profiling and phenotypic characterization of a fungal pathogen during spaceflight. 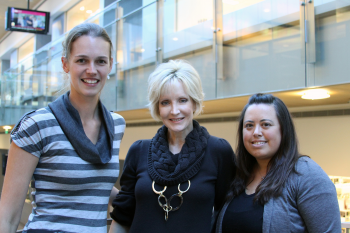 The new study reports the differential regulation of 452 genes in spaceflight-cultured C. albicans, compared to fungal cells cultured under otherwise identical ground-based conditions. The expression of a wide variety of functionally diverse gene families was altered, including those regulating cell aggregation and budding, biofilm formation and resistance to pathogenesis-related stresses and antifungal drugs. In agreement with the gene expression data, C. albicans demonstrated enhanced cell aggregation and a differential budding pattern in response to growth under microgravity conditions.

“Our research has important medical implications for spaceflight safety and may also shed light on the as-yet poorly understood mechanisms of pathogen infection and disease trajectory, both in space and on Earth,” according to Crabbé.

Candida is a type of fungus – a eukaryotic microorganism. It is often found in soils and water, and is ubiquitous in man-made environments, including the space shuttle and International Space Station. C. albicans is part of the normal flora of human beings, present on the skin, in the oral cavity and in the gastrointestinal, urogenital and vaginal tracts.

Although it exists in 80 percent of the human population as an unobtrusive guest, C. albicans is an opportunistic pathogen, turning hostile under particular conditions. This process involves a transition from unicellular, yeast-like cells to a multicellular, filamentous and invasive form, triggered by specific environmental cues.

The pathogen in its transformed state poses a significant infectious disease risk. It is a particularly tenacious foe in immunocompromised individuals, like those undergoing treatment for AIDS, chemotherapy or bone marrow transplantation, and can also cause disease in normal individuals taking antibiotics. The unchecked fungus can cause superficial mucous membrane infections (such as thrush), but also sometimes leads to systemic candidiasis, a potentially lethal condition.

In the current study, fungal cell cultures of C. albicans were flown aboard the space shuttle Atlantis, on NASA Space Shuttle Mission STS-115. C. albicans is a considerable concern during spaceflight missions, as the harsh and rigorous environment encountered by astronauts weakens their immune system, leaving space voyagers especially vulnerable. Indeed, such infections are not uncommon among flight crews and are of grave concern during longer missions.

While the phenotypic changes induced by spaceflight were consistent with features associated with increased virulence, the spaceflight C. albicans cultures did not exhibit heightened virulence when mice were exposed through i.p. injection. Further research is required to conclusively determine if spaceflight alters C. albicans virulence. Of particular importance is to assess whether the compromised immune system of astronauts could influence their susceptibility to C. albicans infecti. The propensity of C. albicans to cause mucosal and deep tissue infections, coupled with the immunosuppressive condition characteristic of flight crew members, make a more thorough evaluation of virulence potential imperative.

The new research is the first to demonstrate global regulation induced by spaceflight in a eukaryotic pathogen – an essential step in disease-risk assessment. Results from this research will also serve to direct future spaceflight experiments, and will allow scientists to further enhance their understanding of the response of microorganisms to the microgravity environment. The potential role of transcriptional regulators like Cap1, as well as other characteristics associated with a virulence phenotype, are fertile ground for future study.

“This research serves as a springboard to inform ongoing spaceflight studies of Candida albicans, as well as to put our ground-based studies into context,” says co-author Sheila Nielsen-Priess, of the Department of Immunology and Infectious Disease, Montana State University. “The ultimate goal is to achieve a better understanding of how C. albicans causes infection, in space or here on Earth. Studying the yeast in the extreme environment of microgravity provides an additional window through which to view the cellular response and to better understand its behavior.”

The Nickerson group has a long and productive track record of examining the effects of microgravity on various pathogenic microorganisms known to cause illness in humans. In previous studies, they sent a variety of pathogens for study aboard several different space shuttle missions to assess alterations in global gene and protein expression, morphology and virulence.

Among the more remarkable findings of this research are that pathogens globally alter their gene expression and disease-related properties during spaceflight culture in ways that cannot be observed during traditional experimental approaches, where the force of gravity can mask key responses.

One of the key factors influencing gene expression and physiological alterations to pathogenic cells in microgravity – both prokaryotic and eukaryotic – is a property known as fluid-shear. This refers to the level of abrasion caused by extracellular fluids flowing over cell surfaces.

Under microgravity conditions, fluid-shear is reduced, triggering changes in gene expression and associated phenotypic alterations. Such changes may in fact mimic conditions microbes encounter on Earth; for example, regions in the human body where fluid-shear is similarly reduced, including in the gastrointestinal, urogenital and respiratory tracts.

Previously, the Nickerson team reported the landmark finding that spaceflight increased the virulence of Salmonella typhimurium, which was independently validated on two separate shuttle missions. Their follow-up studies with NASA collaborators showed altered disease-related responses for Pseudomonas aeruginosa and a methicillin resistant Staphylococcus aureus (MRSA) strain when exposed to either spaceflight or spaceflight-analogue conditions produced on Earth.

To simulate microgravity on Earth, an apparatus known as a rotating wall vessel (RWV) bioreactor is used. This cylindrical device gently rotates cells, keeping them in suspension in low fluidic conditions relevant to those they encounter in spaceflight and in the human body during infection.

Nickerson and her colleagues demonstrated that a conserved protein known as Hfq serves as a master regulator that controls Salmonella and other bacterial pathogen responses to spaceflight and spaceflight analogue environments. The findings are significant, not only for understanding the mechanisms of bacterial gene regulation, but also as a potential target for future therapies against pathogenic infection.

“I am pleased that our team’s spaceflight research continues to provide compelling evidence of the value of the unique microgravity platform to unveil novel molecular and cellular responses in a variety of different human pathogens that are relevant to how they cause infection and disease in the body,” says Nickerson, who is also a professor in ASU's School of Life Sciences. The results of this work have downstream implications for the health of both astronauts and the general public on Earth.