From harvesting oranges grown on campus, to spreading the importance of sleep in two languages, to creating engineering excellence half a world away, Arizona State University faculty and staff are helping to change the world for the better. 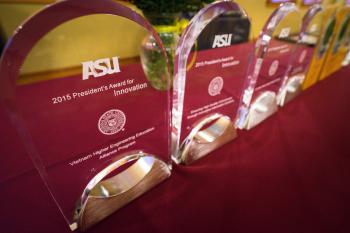 Speaking at the reception, President Crow cited three key things the efforts of ASU faculty and staff are accomplishing: inspiring people through innovation, using those innovations to achieve university goals and demonstrating the model of enterprise.

Vietnam is home to the Intel Corporation’s largest test and assembly site in the world. To a company that is the world’s foremost producer of devices that make computers possible, having a staff of expertly trained engineers is essential.

In 2010, Intel approached ASU to pursue a USAID Global Development Alliance grant, which would bring co-investment from a consortium of higher-education, industry and government partners, allowing Vietnamese engineering faculty to train at ASU as well as participate in ASU-led, in-country workshops.

One of this year’s recipients of the President’s Award for Innovation, the Higher Engineering Education Alliance Program (HEEAP) is giving Vietnamese engineering faculty the knowledge and skills to graduate work-ready students who possess the applied and technical communication skills required by multinational corporations.

“It is gratifying six years into this project to see the transformation in the classroom by the faculty bringing a lot of the active-based, applied project and team-based learning approaches to their instruction,” said Jeffrey Goss, project director for HEEAP, executive director for the Office of Global Outreach and Extended Education and assistant dean in the Ira A. Fulton Schools of Engineering.

Other recipients of the President’s Award for Innovation

• ASU Compressed Gas “Under Pressure” Program – This program raises the awareness of the serious hazards inherent in compressed gas use. Compressed gases are used in about 700 research laboratories at ASU.

• Ensuring High Quality Colonoscopy Through Innovative Informatics Solutions –  In collaboration with Mayo Clinic, the Imaging Informatics Lab in the Department of Biomedical Informatics at ASU has developed use-inspired innovative solutions to help reduce the polyp miss-rate of colonoscopy.

• The Cronkite Public Insight Network Bureau – Through this unique collaboration between ASU's Walter Cronkite School of Journalism and Mass Communication and American Public Media, students work with professional newsrooms across the country to develop new ways of engaging communities in their reporting.

As a university known for its commitment to sustainability, it’s only natural that the ASU community would find several ways to implement sustainable practices on its campuses. One of them is the Seville Orange Juicing Partnership, which was one of the recipients of the President’s Award for Sustainability.

This past year, volunteers and Facilities Management Grounds staff harvested 10,000 pounds of Seville oranges from the Tempe campus, and Sun Orchard processed and bottled 380 gallons of juice. Aramark then purchases the juice for their chefs to use in a wide range of dishes and drinks throughout the year in ASU residence halls, restaurants such as Engrained, the Pods and catered events. Even the orange peel is processed and used by local farmers as a healthy, all-natural feed for cattle and hogs.

“The campus harvest program is beneficial to the ASU community because edible landscaping combines form and function in an innovative way,” said Krista Hicks, a sustainability manager with Aramark at ASU.

Other recipients of the President’s Award for Sustainability

• Clinton Global Initiatives University Zero Waste – In March 2014, ASU hosted CGI U. During a two-day period, 3,000 pounds of solid waste were generated, but only 127 pounds went to the landfill; the rest was composted, recycled or donated to local food banks. ASU was the first host institution to achieve zero waste for the annual conference.

• Sustainability Science Education Project – This project from the Biodesign Institute partnered with the Teachers College to develop a new and innovative hybrid course called Sustainability Science for Teachers. This course is required leverages the power of digital storytelling to convey difficult concepts in an engaging and approachable manner.

Poor sleep is a lifestyle factor that plays a significant role in the development of obesity and diabetes; however, lay and professional health workers receive little training in sleep disorders, sleep health promotion or the importance of good sleep to encourage health and well-being.

“People generally emphasize diet and physical activity, but don’t realize that sleep is just as important a lifestyle factor,” said Carol Baldwin, ASU associate professor and team leader of the Your Sleep/Your Life; Su Sueño/Su Vida project, one of this year’s recipients of the President’s Medal for Social Embeddedness.

Other recipient of the President’s Medal for Social Embeddedness:

Four employees are singled out for this extraordinary honor based on the quality of their work as recorded in the SUN Awards they received from ASU faculty and staff during calendar year 2014, and by their managers’ commendation of their exceptional performance.

ASU tax expert Don Frost enjoys digging into tax codes more than the average person and shared some tax trivia to help get us through April 15.

April 15 is rarely anyone’s favorite day of the year. But ASU's Don Frost aims to make it a little less, well, taxing with some interesting trivia.

Frost, a lecturer at ASU's W. P. Carey School of Business, knows taxes. The ASU alumnus worked in accounting for years, including with one of the “big 8” firms and with the fledgling America West Airlines, and along the way taxes caught his fancy. 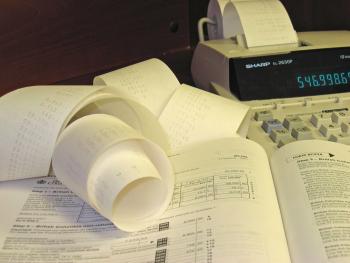 “Tax intrigued me because it was the application of accounting, law and prose all wrapped up into one,” says Frost, who implemented an ASU West campus branch of the Volunteer Income Tax Assistance program this year. The program is sponsored by the IRS, and Arizona State University is a participant.

He has spent every weekend since January helping staff the program there but took some time to talk tax trivia.

1. Doomsday happens, and you would STILL have to file your taxes

Early on in his career, Frost was reading through revenue procedure and found directions for what the IRS would do in the event of a nuclear holocaust and the vaporization of the secretary of the Treasury.

“Literally, in the aftermath of World War III we would continue to collect taxes,” Frost says.

One section of the Internal Revenue Code – 341(e)(1), if you must know – has, from the first capital letter to when you finally hit a period, more words than Lincoln’s Gettysburg Address. (Frost always thought it would be a fantastic sentence-diagram exercise.)

The section, which deals with collapsible corporations, was repealed in 2004. We’re fairly sure it wasn’t because of the run-on sentence, but you never know.

George Harrison wrote Beatles song “Taxman” (which Frost points out you’ll likely hear often on the radio on April 15) as an attack on the high levels of progressive tax in Britain at the time. The lyric “There’s one for you, 19 for me” was in reference to the 95 percent “supertax” that the Beatles were subject to because of their income level.

The U.S. is no stranger to high marginal rates. During the latter part of World War II, the highest was 90 percent. (The effective or “real” rate was substantially less, it must be noted.) For comparison, right now, the highest marginal rate is 39.6 percent.

It happens in other countries, too, Frost says: director Ingmar Bergman and tennis player Bjorn Borg both left Sweden for Monaco because the tax rates were so high.

By the way, if you decide to follow their lead and leave the U.S. for tax-protest reasons, be aware that you’ll face a steep charge. An exit fee, if you will, Frost says.

4. When the government takes your shorts

There have been many colorful acts of tax rebellion. Frost cites one real case, well documented, in which taxpayers owed the government money and paid it with a check written on underwear.

“And the government cashed them!” Frost says.

Unless you’re ready to deal with the government wrath created by such a stunt, we’d suggest keeping your BVDs far from the IRS.

In 1913, the federal government (the Internal Revenue Bureau in those days) did not tax the salaries of employees of state and local governments, under a theory that the feds could not step on the toes of the states and vice versa – the doctrine of intergovernmental immunity.

That interpretation changed over the years, and in the late 1930s, the U.S. Supreme Court more or less indicated that in most circumstances taxation of salaries of state/local employees by the federal government was just fine.

So today ASU employees pay federal income tax, but 100 years ago, it was a different story.

6. Got a student loan? Pay attention

When student loans mature and start accruing interest, that interest is a deduction ­– but not just any deduction. It is what’s called an above-the-line deduction, Frost says, with the “line” being the line of adjusted gross income on the form.

So what does that mean? Even if you take a standard deduction rather than itemized, you can still take a deduction for the student-loan interest on top of that.

“It’s a smoking deal,” Frost says, and one that many people don’t realize, leaving their loan interest on the table.

One caveat: If Mom or Dad still list you as a dependent, you can’t claim it. But they might be able to.

7. We know your pets are family, but … well, they’re not, actually

Frost had a client who tried to claim his dog as a dependent.

“He took the pet-parent thing to the nth degree,” he says.

But no matter how much you love your pets (even if you love them more than your family), they can’t be claimed as a dependent.

People also have tried, unsuccessfully, to claim well-tipped restaurant servers as dependents, as well as deductions for donated blood, semen and eggs. No dice, Frost says.

8. But you can claim this as a deduction

Gender-reassignment surgery is deductible, as long as the person is properly diagnosed with gender identity disorder or gender dysphoria.

This has not always been true, but even the IRS changes with the times and with changes in the medical community.

9. Everyone owes taxes – everyone

One of the big misconceptions, Frost says, is that people think they didn’t owe any tax if they get a refund. You DID owe tax; you just overpaid.

And before you get too excited about that refund, remember that getting one means you gave the government an interest-free loan. If that’s less than palatable, you might want to revisit your withholding setup.

10. Even people in space

However, residents of the International Space Station are technically out of the country, so they trigger an automatic two-month extension. And we’re fairly certain they e-file.

Speaking of space explorers, Frost says there’s a story that members of the Apollo missions got hazard pay, and that was taxable ­– even though it was earned on the moon.

11. About that, ahem, side business

All income, even illegal income, is supposed to be claimed on your taxes.

Don’t believe us? Ask infamous gangster Al Capone, sentenced to 11 years in federal prison for not paying income tax on his ill-gotten gains. Of course, he also responsible for countless deaths, but it was the taxes that landed him in the clink.

12. And finally, for those of you who still aren’t finished with your taxes

“I don’t think people understand the nature of tax extensions,” Frost says. “You can request one, and it gives you another six months to file and prepare. But it doesn’t give you another 6 months to pay any tax you owe.”

So if you owe money to the government, be aware that interest and penalties start accruing after midnight April 15, even if you don’t have to file for months because of an extension.