To patrons of fine art, space might seem like a foreign frontier but the monOrchid art gallery in downtown Phoenix will bring the two together when it hosts dozens of images taken from NASA’s Lunar Reconnaissance Orbiter Camera (LROC).

The Lunar Reconnaissance Orbiter (LRO) is a NASA mission that is a precursor to the return of humans to the Moon. LROC, which is one of seven instruments aboard the orbiter, is run from the Tempe campus by principal investigator Mark Robinson. 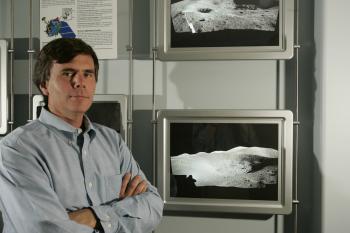 This unusual exhibit will feature LROC images of the Moon depicting impact craters, ancient lava flows and the Apollo landing site where astronauts first stepped onto the lunar surface. The exhibit will premiere Nov. 2, during the First Friday art walk in downtown Phoenix, and remain open from 5 to 10 p.m. every Friday in November. MonOrchid is located at 214 E. Roosevelt St., in downtown Phoenix.

“The Moon is a really beautiful place,” said Robinson, creator of the exhibit. “These are like Ansel Adams images of the Moon.”

Robinson, who is also a professor in the School of Earth and Space Exploration in the College of Liberal Arts and Sciences at ASU, said he was inspired to build the exhibit as a way to reach new audiences who would not typically get to see high-quality lunar images. “This is a fantastic way to reach out to the public in a different way than we normally do,” he added.

MonOrchid owner Wayne Rainey said that on a typical First Friday night as many as 10,000 people visit his gallery. He said the exhibit is an opportunity to start a conversation with generations of people who did not grow up during the Apollo missions and never saw images of the Moon.

“The best art informs us emotionally and intellectually, and this is a chance to get kids involved in the arts,” Rainey said.

The centerpiece of the exhibit, a 10-foot square mosaic of Aristarchus Crater, will be accompanied by other large photographs showing prominent features on the lunar landscape.

LROC research engineer Emerson Speyerer also has put together a film that will be shown in the gallery. The film includes original footage taken during the first astronaut mission to the Moon alongside modern-day footage taken by LROC.

“When people envision the Moon, it’s nothing like what they actually will see and what we can take an image of,” Speyerer said.

Robinson added that exciting the public about space and the Lunar Reconnaissance Orbiter’s mission to put humans back on the Moon is one goal of the exhibit.

“The Moon is not a dead and boring place,” he said. “I want them to walk out of there and say, ‘Wow, the Moon is a beautiful place, and it’s great that we have spacecraft taking those pictures.'”

ASU researchers are recruiting participants for a research study that will test the feasibility of a sedentary intervention to decrease sitting time at work.

Do you sit at a desk all day? Do you feel still when the day is over?

Researchers from ASU's School of Nutrition & Health Promotion are recruiting participants for a research study that will test the feasibility of a sedentary intervention to decrease sitting time at work. Who: Healthy non-smoking men and women

Eligibility: While there are no restrictions for participating in physical activity, study subjects should currently work in a desk-based job.

• The first visit will last 30 minutes in your own office. You will go about your day as you normally do in your office while wearing monitoring devices for physical activity.

• The second visit is a one-hour orientation session.

• Ten weeks later, the third visit will last 30 to 60 minutes and will include follow-up surveys and require the wearing of physical activity monitoring devices.

Between the second and third visit, study subjects will receive weekly health newsletters.

Benefits: Will be given a health assessment and personalized feedback on physical activity levels.

Contact Amanda Gordon at standupASU2012@gmail.com or (801) 597-8836 for more information, or if you would like to participate in the study.