Ann Morton did not foresee the depth of change coming in her life when she resumed her art education at ASU in 2003.

A successful graphic designer for more than 20 years, she felt the need to change her focus. “I had a desire to change my creative practice away from a more commercially-oriented one to one that would allow me to develop my own voice as an artist,” she says. 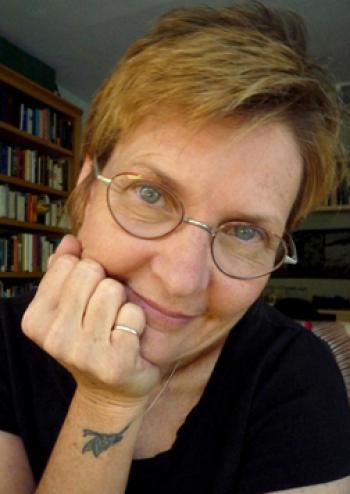 She completed her unfinished bachelor’s degree in fine arts, and entered the master’s program with a concentration in fibers at ASU’s School of Art in the Herberger Institute for Design and the Arts.

“At the beginning of my graduate career, I gave into a fascination with seeing lost items such as clothing, toys, pillows – any fabric or fiber-based object – that would lie along roads, highways or just in the environment,” she says. “The more I collected, the more these items became precious. These found objects represent a population of lost people whose real story I would never know.”

Eventually the found objects would become a project she called the Collective Cover. Objects were photographed in place as they were discovered, then re-photographed as a “mug shot” with an assigned number. Daily headlines, pop culture and events were recorded to mark the “birth” of each new item, which then was shrouded and preserved in a white canvas cover with a QR code, which can be scanned with a smartphone to link to the website.

Still, she says, “I felt haunted by the feeling that there was something missing at the heart of the work I was doing.”

A course taught by Gregory Sale, a professor in the School of Art, inspired her to venture into the realm of public art interventions, a practice in which artists perform or engage the public in an attempt to change or influence existing conditions.

"13 Fridays" was the result, in which Morton and 21 other volunteer knitters spent 13 Fridays at Human Service Campus (HSC), the main facility for the homeless in downtown Phoenix. They knitted 142 warm hats for those who needed them in the winter cold.

Morton became inspired by the work of Tillie McKoy, a formerly homeless woman that helped found WOW (Women of Wealth) to empower and educate homeless women, and the volunteers began teaching crochet, sewing and knitting to the homeless. She also began paying Ed, Ina, Marvin and several other homeless people to produce work that would contribute to her master’s thesis project at ASU.

“I've seen the joy when one of these individuals learns a new skill and even better, has been able to use it for a modest income and to be a part of something larger than themselves in the community,” Morton says.

Morton merged her collection of abandoned objects with work produced by the homeless into “UNENTITLED,” her MFA Thesis Exhibition presented at the Harry Wood Gallery on the Tempe campus.

At the center of the exhibit was the “Caution Field,” a crocheted rug of black and yellow caution tape made by the hands of the homeless, over which hung the “False Safety Net,” containing all the unprocessed objects acquired through the Collective Cover Project.

“Pairing these two pieces, I intended to portray the feeling of being homeless – cordoned off from society, but in plain sight,” Morton says.

While pursuing her master’s degree, Morton and her husband have raised their youngest daughter, now a junior in high school. They also have two older daughters and four grandkids. Although she has done some design consulting and worked as a teaching assistant while acquiring her degree, she has had to abandon any ideas of retirement.

“At my age, this has been a huge financial risk," Morton says. "But the depth of the experience leads me to have faith that these years can translate into opportunities for making a living.”

As she graduates with a master’s degree in fine arts (MFA) this May, Morton plans to teach and to continue her work with the homeless.

“The use of these fiber traditions tends to evoke a softness, often memories of childhood. In using these techniques, and the powerful connotations they employ, I enjoy turning them upside down to attract interest to a variety of social concerns. I want to pass on these techniques to the homeless, many of whom have not often experienced a feeling of accomplishment.”

One of her ideas is a nonprofit micro-enterprise for homeless-made products. “The intent is to provide a modest source of income to people who might otherwise be unemployable,” she says.

Morton frequently exhibits her work and has won several awards, including first place in a juried exhibition at National Surface Design Association 2011 Conference. The Graduate College awarded her a 2012 Completion Fellowship.

See more of her work at annmortonaz.com.

Herberger Institute for Design and the Arts Arts Student

Victor Diaz didn’t always believe that he would one day walk across the commencement stage and accept his doctorate in educational leadership.

Victor Diaz didn’t always believe that he would one day walk across the commencement stage and accept his doctorate in educational leadership.

“As the first person in my family to graduate from college, I can't put into words how special this is for my family and me,” Diaz says. “If someone had told me years ago that I would receive a Ph.D., it would have been like hearing I was moving to the North Pole and taking over Santa Claus' job.” 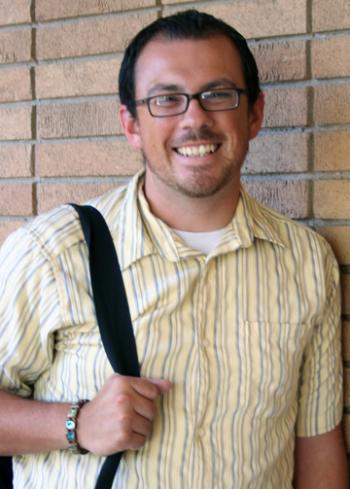 The first steps to higher education were daunting to a young person growing up in a lower-income community. He grappled with his dual identity as the son of a blue collar Mexican-American family and as a scholar at a university.

“Once I found that identity, I felt like all the financial and social challenges that come from being a first generation college student could no longer stop me,” he says.

After earning a bachelor’s in broadcasting from ASU in 2002, Diaz was accepted into Teach For America, and moved to San Jose, Calif., where he taught high school English and English language development for the next five years.

In 2007, he received a master’s degree in Educational Equity and Social Justice from San Francisco State University. Although he received competitive offers to attend other universities, Diaz felt a commitment to his home state of Arizona and wanted to earn his doctorate at ASU with Gustavo Fischman, a professor in the Division of Educational Leadership and Innovation.

Diaz was awarded the Graduate College Doctoral Enrichment Fellowship for 2008-2009. The competitive fellowship supports first-year doctoral students who demonstrate academic excellence and are underrepresented in their field of study.

Diaz was inspired to not only encourage students on the path to higher education, but to find ways to more effectively train beginning teachers, particularly those who teach in poor and working class communities.

For his dissertation research, Diaz developed an innovative and original model for teacher training by combining two educational concepts known as PCK (pedagogical content knowledge, or "how" to teach the required content) with CHAT (cultural historical activity theory).

“By coupling the study of PCK and CHAT, Dr. Diaz breaks new ground, overcoming the limitations of previous studies in the field of teacher education,” Fischman says. “It will allow policymakers, faculty, administrators and students to plan, assess and implement better training and retention policies for beginner teachers.”

At ASU, “I've had the opportunity to work with amazing scholars, and publish research both with them and on my own,” Diaz says. In the last year, he presented two papers at the Annual Meeting of the American Education Research Association, and authored two book chapters that will be published in different volumes.

As he accomplished all this, he also became a new father in December.

“I can't wait to tell my son, Benny, about what I did in between feedings and diaper changings,” he says, “and about what a rock of support my wife and his mother was for me during this time.”

He will accept a doctoral degree in Educational Leadership and Policy Studies from the Mary Lou Fulton Teachers College on May 2.

After graduation, he has accepted a position in Teach For America's Teacher Preparation and Support team, where he will design professional development and training for staff, who in turn will train and support thousands of teachers across the country.

“I also plan to continue the research projects I started at ASU, and publish my research accordingly.”

“I hope this degree stands as a demonstration of the power of an education,” Diaz says. “I also hope that my biography can be a source of inspiration and motivation for other people from similar backgrounds. I know I would not be here without the influence of those who came before me, so I hope that I can serve in that role for young people as well.”