Since the dawn of history, humans have been fascinated by what lies beyond our own planet. This natural human curiosity has spawned books, movies, missions and research that all seek to explore the mysteries of outer space.

One tool for piecing together this puzzle is the study of meteorites, the interplanetary messengers that bring missives from other worlds and help us understand the origin and makeup of our solar system. 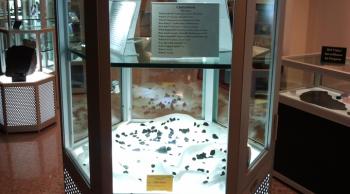 Meteorites are pieces of space rock that wander into Earth’s orbit and fall to the surface. They come from various places in our solar system, including asteroids, the moon and even planets, like Mars.

The Center for Meteorite Studies (CMS) at Arizona State University is dedicated to studying these space rocks and applying the knowledge gained to several areas of study. Encompassing over 30,000 individual meteorite specimens, CMS is the world’s largest university-based meteorite collection.

Meenakshi Wadhwa, director of the center and a professor in the School of Earth and Space Exploration, says that the rewards of studying these extraterrestrial rocks are endless.

“The interesting thing about meteorites is that they look like any other ordinary rock, but when you look at them in detail, their chemistry and their mineral compositions will tell you something about how they formed and the kind of environment that they formed in,” says Wadhwa. “We can learn something fundamental about the geology of the planets they formed on, which is why people are drawn in by these rocks.”

The work being done at the center includes examination of meteorites blasted off the surface of Mars, which can provide a history of the planet, as well as the status of its water and atmosphere. Most meteorites, however, originate from asteroids, which formed before the planets were formed. The study of such meteorites and their molecules also provides a timescale of some of the earliest events that occurred in our solar system.

The hunt for these specimens on Earth can require a great deal of patience. But occasionally, we get to witness the falling of this extraterrestrial rubble to our planet’s surface.

On April 22, 2012, a meteorite classified as a carbonaceous chondrite, or a meteorite that is rich with carbon compounds, entered Earth’s atmosphere and dispersed over Sutter’s Mill in Coloma, California.

While studying fragments of the Sutter’s Mill meteorite last year, ASU researchers led by Sandra Pizzarello, a professor emeritus in the Department of Chemistry and Biochemistry, made a significant discovery.

In addition to containing some of the oldest material in the solar system, pieces of the Sutter’s Mill meteorite contained organic molecules not previously found in any other meteorites. These molecules were released in experiments that mimicked conditions on ancient Earth.

In a paper published in the Proceedings of the National Academy of Sciences, the scientists wrote that the organic compounds released from the Sutter’s Mill meteorite were likely formed when the parent asteroid experienced extreme heat. Such compounds “could equally have been produced on the early Earth by carbonaceous meteorites upon encountering analogous conditions and environments,” they noted.

These findings are extremely important in the study of molecular evolution and even the development of life. They suggest a greater availability of organic molecules from outer space than previously thought possible.

“Meteorites are the recipient of carbons which could have spurred all life on Earth,” says Pizzarello. “To study meteorites, to get a full inventory of what the meteorites could have brought to the Earth, is very important in the context of understanding the origins of life.”

Sutter’s Mill is an example of a fallen meteorite. Typically, meteorites are classified as either falls or finds. Falls are seen entering the Earth’s atmosphere in the form of a fireball, and finds are, as the name implies, found.

Finding meteorites on Earth without witnessing the fall can prove difficult. According to Pizzarello, finds are most easily identified in Antarctic regions, where they stand out against the white snow. However, many can resemble everyday rocks, and it is therefore helpful to recognize the differences.

Meteorites from Mars and the moon have a different chemical and mineral composition than rocks found on Earth. It is therefore extremely beneficial for scientists and researchers to collect these recently fallen samples, lest they become contaminated after spending too much time among the elements on Earth’s surface.

Elizabeth Dybal is an ASU sophomore majoring in geology who assists in research for the Center for Meteorite Studies. On the subject of identifying meteorites, she mentions a tongue-in-cheek term to classify everyday rocks mistaken for their space-based siblings.

“We call them ‘meteor-wrongs,’” says Dybal. “Sometimes these can be slag or igneous rock.”

If the suspected meteorite is marked by tiny holes on the surface, giving it a spongy appearance, it is probably volcanic or terrestrial rock. Conversely, meteorites will contain a significant amount of extraterrestrial iron and nickel, so a common test to identify them is to use a magnet. If a magnet does not adhere to the specimen, it is not a meteorite. However, many Earth rocks can also attract magnets, so this test is simply a first step.

Researchers can also analyze these rocks by their age, as many meteorites are the same age as the solar system, or about 4.5 billion years old. This helps identify meteorites because, due to erosion and reformation, no Earth rocks are this old.

Dybal studies the chemical and mineral composition of meteorites, which provides another way of distinguishing them from Earth rocks, as well as a wealth of other information.

She takes fragments of meteorites and separates minerals from these fragments using a sifter. The minerals are grouped together and then analyzed for isotopes of specific elements using a mass spectrometer.

“The data gained from this will tell us when the meteorite was first created and/or first crystalline by using half-life dating,” says Dybal. “This can help determine where or what environment the meteorite came from.”

Dybal believes the hands-on experience she is getting will benefit her in the future.

“Since working at the center in the lab is really hands-on, it’s a great experience for what I'll be doing in grad school and afterwards,” she says. “It’s given me more insight into how my classes will apply and prep me for the future.”

The benefits of working with such a renowned collection and the contributions of student researchers are what make the center so successful, according to Wadhwa. Public interest in these extraterrestrial bodies has remained constant and likely always will.

“People are fascinated by space,” says Wadhwa. “People love to answer fundamental questions about our very origins. How did life begin? Those are the kinds of questions that people studying meteorites are trying to answer, and it’s something that resonates with the kid in all of us.”

The School of Earth and Space Exploration, the Department of Chemistry and Biochemistry, and the School of Geographical Sciences and Urban Planning are academic units of the College of Liberal Arts and Sciences.

Thanks to the ASU Commission on the Status of Women, there is now a university-wide mentoring program in place to provide mentoring opportunities for all staff.

Ask any successful leader about how their career developed and many will reference the impact of mentors in their lives. Now, thanks to the ASU Commission on the Status of Women (CSW), there is a university-wide mentoring program in place to provide mentoring opportunities for all staff.

The CSW Staff Mentoring and Development Program pairs experienced and excelling staff members with staff who are interested in developing their career and leadership skills. The program is structured to provide support, networking opportunities and professional development training to help staff members develop their careers and become advanced contributors to the New American University.

According to Karen Engler-Weber, the CSW’s senior coordinator, the program was developed after extensive research into the availability of staff mentoring programs at all public/state universities nationwide, with a specific focus on looking at ASU’s peer and aspirational institutions.

“In our work with staff, we were frequently hearing about the desire for mentoring opportunities," Engler-Weber said. "This prompted us to look into the feasibility of developing a mentoring program, but we didn’t want to just patch something together; we wanted to build a model program that would provide both mentoring and development training.

“We looked at every university in the country to see what type of mentoring opportunities were available for staff, and found that while mentoring programs existed sporadically – mainly through individual colleges or units – overall, there are very few universities nationwide that offer a university-wide staff mentoring program.”

Of the mentoring programs that did exist, the CSW researched and conducted interviews with them to learn about best practices and the challenges of such programs.

From there, the CSW continued to research mentoring practices, and began to work with mentoring consultants from HR’s Leadership Workforce and Development group. The result was the construction of a program that provides monthly mentoring meetings, as well as special development training that focuses in part on identifying strengths and skills, and promoting those skills.

The program utilizes the book “Strength Based Leadership,” which includes a valuable online assessment. This is the same book that is utilized in the LINAU program. In addition, the program also features some unique programming, such as “Table Talk with an Administrator,” which provides an informal opportunity to learn about the career development of a university leader.

“With this CSW program, ASU now becomes one of the very few universities in the country to offer a university-wide staff mentoring and development program. It’s very exciting!” remarks Engler-Weber. “The program is designed to help staff members learn more about the university, and to help them have a long-term career at ASU, in their current position or for positions in the future.”

The CSW ran the first cycle of the staff mentoring program in summer 2013 for a select group of nominated participants from a select group of colleges. The program ran for four months, had 20 mentoring pairs across all campuses and featured three development programs. Although the first cycle of the program was smaller and shorter, the positive impact of the program was clear. Eighty-seven percent of participants indicated that the program increased their self-confidence professionally, while 94 percent of program participants found the experience beneficial to their career.

As one mentee participant noted, “The CSW Staff Mentoring Program increased my awareness of who I am as a leader, my professional network and my motivation for being a leader within ASU.”

But it wasn’t just the mentees who found the experience rewarding; mentors in the program reported the experience to be very positive. As one mentor remarked, “I am proud to have been a part of the CSW Mentoring Program. I have created new friendships with colleagues on campus, and the program gave me a chance to encourage other staff members to be proud of the work we do at ASU. Sun Devil pride!”

“It was clear from the feedback, that the program provided important opportunities for not only the mentee, but the mentor as well. The program provides an opportunity, as well as resources and structured support, for a mentor to develop their mentoring skills. A prospective mentor does not need to have previous mentoring experience to be part of the program” says Engler-Weber.

The CSW Staff Mentoring and Development Program is open to all university staff.

The application deadline has been extended through April 30.

To learn more about the program (including anticipated time commitments) and to download the application materials, visit the CSW’s website. You can also contact the Karen Engler-Weber at karen.engler@asu.edu.