A business startup formed to commercialize technology developed by an Arizona State University engineer and his students has won an Arizona Innovation Challenge award from the Arizona Commerce Authority (ACA), the state’s leading economic development agency. 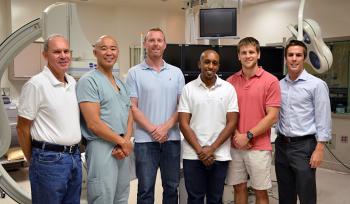 Recipients of the award “represent innovative Arizona entrepreneurs who are creating technological solutions with the potential for global impact,” the ACA said.

The award brings the company, EndoVantage, a grant of $250,000 to support development of its business operations. The venture is based on a novel software platform that simulates the effects of deploying small medical devices (stents, for example) into blood vessels, as well as simulating the resulting blood flow changes.

EndoVantage is one of six ventures to receive an Arizona Innovation Challenge award so far this year from among 135 applicants.

The startup was also recently selected to receive support from ASU’s Edson Student Entrepreneur Initiative – $20,000 in seed funding, along with office space and other resources at SkySong, The ASU Scottsdale Innovation Center, and mentoring from business experts.

In addition, the venture was accepted into IBM’s Softlayer Incubator, which is providing mentoring in software engineering and business-related services.

In 2013, EndoVantage received a $100,000 grant from the Center for Individualized Medicine at Mayo Clinic and the Office of Knowledge Enterprise Development at Arizona State University. The competition, which included 20 ASU and Mayo Clinic teams, was intended to promote personalized health care, the next frontier in patient-specific medicine.

Babiker is the chief technology officer. He is a postdoctoral research associate in the School of Biological and Health Systems Engineering.

With the EndoVantage platform, clinicians “now for the first time can design the optimal endovascular treatment strategy for each patient before surgery,” Frakes said. “This improves the quality of treatment and reduces costs.”

The technology will also enable medical device companies to perform virtual testing of medical devices in hundreds of different virtual patient anatomies. That capability will help improve product design and prevent product defects and other risks to patients, Frakes said.

“Ultimately, the EndoVantage technology will lead to better medical devices, and better use of those devices in the clinic to save patients’ lives,” he said.

The spinout of EndoVantage from ASU was facilitated by Arizona Technology Enterprises (AzTE), ASU's technology transfer organization. AzTE has worked with Frakes’ team throughout the process from commercialization to startup and revenue generation.

“ASU is on the leading edge of universities supporting research commercialization efforts by faculty,” Green said. “The support we have received from AzTE and the Entrepreneurship and Innovation Group has been critical to our success to date.”

Twenty-five accomplished young professionals from Africa are sharpening their civic leadership skills through a six-week training institute led by the College of Public Programs at Arizona State University.

Twenty-five accomplished young professionals from Africa are sharpening their civic leadership skills through a six-week training institute led by the College of Public Programs at Arizona State University. Launched in 2010, the institute is the Obama Administration’s signature effort to support young African leaders in their effort to spur growth, strengthen governance and enhance peace and security across Africa.

This summer, cohorts across the country are participating in one of three focus areas: business and entrepreneurship; civic leadership; and public management.

ASU’s civic leadership institute is oriented toward young Africans who serve the public through non-governmental organizations, community-based nonprofits or volunteerism.

For more than three years, the venture has been successfully helping youth in rural and disadvantaged communities gain the skills needed for employment. She hopes to addresses the challenge of giving youth useful skills while keeping them in their community with meaningful employment opportunities.

“There are many partnerships being created here,” Ndakisa says of the Washington Fellowship program. She mentions her colleague Frank Dugasseh’s idea for mobile libraries, which fits into her own efforts to expand access to education in Africa.

Dugasseh founded the Wechiau Community Library in northern Ghana, which now serves more than 800 children in five districts with an emphasis on girls and the visually and hearing impaired.

“In the northern part of Ghana, illiteracy is greater than 72 percent, and with children who are in school, especially at the primary level, less than 9 percent can read and write,” Dugasseh says. “Many of them are not going to get the right tools to proceed to universities and other institutions, so initiating this intervention was a way of trying to get people interested in reading.”

The fellows are also gaining networking opportunities across the state.

Last week, Dugasseh met with African Energy in Tucson to explore options for bringing solar power lamps to his community, which would allow kids to read at night.

“I don’t often get the opportunity to come over to the states and pass on to another organization that might be interested in seeing that a child progresses,” Dugasseh says.

Fellow Martin Muganzi of Uganda also met with African Energy to learn more about how the solar power industry can create jobs in his home country.

Uganda has one of the largest youth populations and highest unemployment rates in the world, and Muganzi wants to introduce the solar power industry to help create jobs while implementing sustainable energy practices.

ASU fellows have been meeting with various Arizona officials, including a talk and tour with Cottonwood’s economic development director Casey Rooney and mayor Diane Joens about the importance of local business, and a seminar on Arizona’s booming wine industry, which has boosted economic and tourism development throughout the state. Fellows also had the opportunity to meet with Clarkdale mayor Doug Von Gausig, town manager Gayle Maybery and community/economic development director Jodie Filardo.

The fellowship at ASU serves as the beginning of the fellows’ professional training. The U.S. government has a long-term investment in the Young African Leaders Initiative, planning to work with institutions and the next generation of African entrepreneurs, educators, activists and innovators to create meaningful opportunities in Africa.

“When you send a book to a child who has never, ever seen a book before, even how to open it becomes a problem. They don’t know how to open it,” Dugasseh says. “But the joy is that even if a child isn’t able to read, and he looks at the pictures, and he smiles, I draw some satisfaction.”