The curved, four-story building is the 26th ASU building to receive a gold certification. A gold ranking is the second-highest green building ranking under the U.S. Green Building Council's LEED (Leadership in Energy and Environmental Design) program, which recognizes buildings that are designed and constructed to high standards of energy efficiency and sustainability. McCord Hall is the 42nd ASU building to be LEED certified. 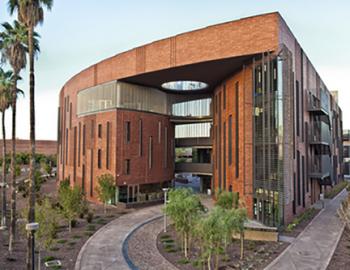 ASU Facilities Development and Management completed work on the $57 million, 129,000-square-foot McCord Hall in June 2013. Philanthropist Sharon Dupont McCord and her late husband, Bob, are the major donors behind the facility’s name. Local companies and families also provided support, with more than $17 million in gifts and bequests to support the building.

“We believe we offer the most advanced learning environment available for graduate business students,” said Amy Hillman, dean of the school. “Every building detail was designed to teach students in a way that makes them better contributors to today’s work environment. McCord Hall emphasizes collaboration, discussion-based learning and flexibility.”

McCord Hall achieved its high LEED rating due to the incorporation of a broad range of sustainable design features. Eighty-nine percent of all construction waste from the McCord Hall site was diverted from area landfills.

The building also is warmed and cooled by an under-floor displacement ventilation system, which delivers more fresh air into the building, higher indoor air quality because of air outlet locations and less dust is stirred with lower air velocities, and reduced energy use because outdoor air economizers can be used longer in the season.

• reduction in artificial lighting use through a control system in classrooms and corridors, which maximizes introduction of daylight

• hands-free operation of fixtures to reduce water use

• interior finishes that have low or no VOC (Volatile Organic Compound), urea or formaldehyde

Existing trees were mulched on site during construction, then shipped and processed on a nearby farm and later used as campus fertilizer. A eucalyptus tree was cut up, given to the ASU Herberger Institute School of Art and transformed into artistic plates.

“A LEED gold certification for McCord Hall is an honor," said Morgan R. Olsen, executive vice president, treasurer and chief financial officer at ASU. "However, it’s the details like repurposing construction-site trees that couldn’t be relocated for campus mulch and for use by our School of Art that truly demonstrate the depth of our sustainability commitment.

“We are proud of our everyday, operational approach to sustainability, which results in beautiful, functional spaces for future Sun Devils to enjoy for years to come.”

DPR Construction was the construction manager for the McCord Hall project, and architects from Kohn Pederson Fox Associates (New York) and RSP Architects (Tempe) designed it.

Since opening, McCord Hall has garnered several awards for design and construction. It was recognized by AZRE magazine with the 2014 RED (Real Estate and Development) Award for Best Public Project. McCord Hall also has been recognized by the Arizona Concrete Institute for Innovation in Structural Design and as the Overall Top Project for 2014, and by the Arizona Masonry Guild, with a Craftsmanship Award and Honor Award in 2014. Most recently, the project was acknowledged at the regional ENR (Engineering News-Record) Southwest Awards as the Best Education Project in 2014.

We can expect our economic recovery to take about another two years in Arizona. That's what experts said Dec. 3 at the 51st annual Economic Forecast Luncheon co-sponsored by Arizona State University’s W. P. Carey School of Business and JPMorgan Chase.

We can expect our economic recovery to take about another two years in Arizona. That’s what experts said Dec. 3 at the 51st annual Economic Forecast Luncheon co-sponsored by Arizona State University’s W. P. Carey School of Business and JPMorgan Chase.

About 750 people attended the event at the Phoenix Convention Center. Key experts delivered a comprehensive overview of what’s happening in the state and national economies, as well as the stock market and housing market. One main message was that Arizona is now growing at a faster rate than the nation, but we still have some distance to go. 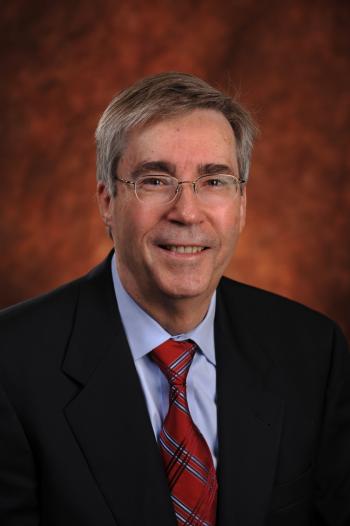 “As of May, the United States finished gaining back 100 percent of its jobs lost in the recession, but in Arizona alone, we’re only 69 percent of the way there,” explained research professor Lee McPheters, director of the JPMorgan Chase Economic Outlook Center at the W. P. Carey School of Business. “We expect to regain that last 96,400 jobs in the next year and a half.”

So far this year, Arizona has experienced 2 percent job growth, while our state’s 30-year average is a much higher 4.2 percent. Still, this rate was good enough to rank Arizona as the No. 12 state for job growth as of October. Arizona ranked No. 13 in personal-income growth by midyear. McPheters believes the state will speed up from here.

Among his Arizona predictions for 2015:

McPheters added Arizona is doing particularly well in creating jobs in finance/insurance and health care. The state is lagging in manufacturing and construction. Arizona unemployment has dropped from 7.8 percent last year to 6.8 percent this year. However, we continue to recover much more slowly than from past economic downturns, and we continue to face risks from ineffective growth policies at the national level.

John Lonski, chief capital markets economist of Moody’s Analytics, addressed the national economy by saying that we can expect more subpar growth in 2015.

“We expect U.S. real GDP (gross domestic product) growth to rise from an expected 2.2 percent this year to about 2.8 percent next year,” said Lonski. “We also anticipate the national unemployment rate may drop from 5.8 percent this October to 5.4 percent by the end of 2015.”

In addition, Lonski predicts U.S. wage and salary income should grow by about 4.5 percent next year. He believes industrial capacity will be more fully utilized. He said the housing collapse, tightening of fiscal policy, and insufficient new product development have been contributing to America’s economic struggle. However, he expects the next major wave of technological innovation to supply stronger-than-expected growth, whether it’s self-driving autos or robotics.

“We’re also experiencing some big changes because of a population shift,” Lonski added. “Only about 1.5 percent of the jobs added post-recession have gone to those ages 16 to 54, while those ages 55 and older gained 20.9 percent. This shift has prompted less spending and more saving, especially by those closer to retirement.”

Lonski also expects the budget deficit to go up, after bottoming out at 2.6 percent of GDP in 2015. That’s because of increased spending on retiring baby boomers, as well as the still-unknown costs of the Affordable Care Act. Decreased defense spending should moderate some of the increases.

James Glassman, managing director and senior economist for JPMorgan Chase & Co., covered the financial markets. He said that, despite the recent rise in stock prices, they are still fairly valued. He added household net worth is back in record territory.

“Credit conditions are improving, and rising vehicle sales prove it,” said Glassman. “Also, we’re seeing some improvements in the housing industry, since builders addressed their previous speculative overbuilding by underbuilding in recent years. Rising home prices are helping to drain the number of ‘underwater’ mortgages.”

Glassman notes the energy sector is also humming along. He expects interest rates to go up next year as the economy continues to improve.

Pollack said there are a few positives, such as slow acceleration of the local economy, decent home affordability, low mortgage rates, a slight loosening of lending standards, and the movement of many all-cash investors to other bargain areas of the country. These factors create more opportunity for local buyers who need financing.

“However, we still see several negatives that outweigh those positives, including relatively sluggish employment growth, fewer people moving, millennials delaying home purchases, many people still waiting out their required seven years in the credit ‘penalty box’ after foreclosures, and overall difficulty in getting home loans,” explained Pollack. “Full recovery is still years away.”

Pollack said more people who have been renting may jump back into the housing market over the next several years as conditions improve. Meantime, apartment construction is up. Pollack believes the Valley won’t see any significant office construction – except in select submarkets like Tempe – until at least 2017.

More details and analysis from the event, including the presentation slides, are available from the business school’s “Research and Ideas” website at research.wpcarey.asu.edu.