The funding will enable La Belle’s research team to take the next step toward preparing for clinical trials of the device that can assess glucose levels by drawing tear fluid from the eyes. Current devices for measuring blood glucose levels require piercing the skin to draw blood samples. 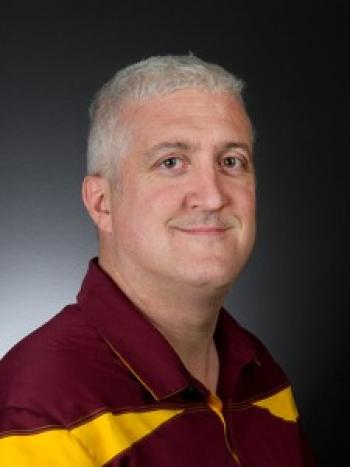 La Belle is an assistant professor in the School of Biological and Health Systems Engineering. He’s been working on the tear glucose sensor for more than three years in collaboration with Curtis Cook, chair of endocrinology at Mayo Clinic-Scottsdale, and Dharmendra Patel, the clinic’s chair of ophthalmology.

The tears sensor project began with support from a Mayo Clinic seed grant in 2011. BioAccel, an Arizona nonprofit that works to bring emerging biomedical technologies to the marketplace, is also supporting development of the tear glucose sensor.

Clinical trials are to be conducted at Mayo Clinic. The project team will seek additional support from the National Institutes of Health and industry to fund the trials.

“We have to make something we can ensure will be safe and effective outside the lab, and that is ready for a manufacturer,” La Belle said.

About 29 million people – more than 9 percent of the population – in the United States have diabetes, according to the American Diabetes Association. The disease is one of leading causes of death in the country.

Monitoring and managing blood glucose (or blood sugar) levels helps people with diabetes control the symptoms of the disease.

The tear sensor has been attracting interest from medical professionals and industry. Progress reports on development of the device have been published in four research journals, and La Belle has made about 25 conference presentations on the device.

He has provided research experience to more than 20 ASU engineering undergraduates and graduate students through their assistance with lab work related to the project.

To help increase participation by underrepresented minorities in science and technology studies and science policy fields, the National Science Foundation has awarded ASU with $237,000 to create a program that targets mid-career undergraduate students who show an initial interest in these fields.

Sometimes choosing to pursue a career or graduate education path comes down to imagination.

Most undergraduates probably have an idea of the day in the life of a nurse, doctor, teacher, firefighter or other careers they’ve likely been exposed to in their communities growing up. But what about a science policy analyst, a research ethicist, a science historian or an environmental justice researcher? 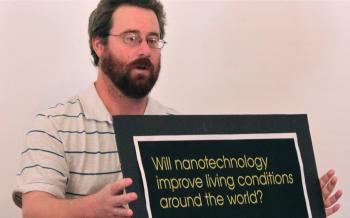 Few undergraduates, unless they have a parent or know someone in the field, are likely aware of – let alone able to imagine themselves in – these and the many other career possibilities available in science and technology studies and science policy fields at the intersection of natural and social sciences.

To help increase participation by underrepresented minorities in science and technology studies and science policy fields, the National Science Foundation has awarded a $237,000 supplement to the Center for Nanotechnology in Society at ASU to create a program that targets mid-career undergraduate students who show an initial interest in these fields.

The program will create a cohort of 24 students across 11 universities, including ASU, and give them a broad understanding of how science and the government interact, how social science methodologies can be applied to questions concerning science and technology, and what opportunities for graduate-level training and careers in science and technology studies and science policy exist.

The program will target students nearing the end of their second year of undergraduate studies, and will combine coursework, two workshops in Washington, D.C., mentorship and a research project.

“Many graduate students arrive at STS (science and technology studies) or science policy after a search, after trial and error,” says David Guston, professor of politics and global studies and director of the Center for Nanotechnology in Society. “We want to connect with students early enough in their undergraduate careers that they’ll be able to do some training and preparation, and also be exposed to good mentors who have had interesting and successful career trajectories.”

Students selected for the program will already have shown some interest in these fields. “They will have made some decisions about what they’re interested in, picked majors and already be on some sort of track,” says Ira Bennett, who, as the assistant director of education at the center, will lead the project. “We hope to put an inflection point in that track.”

Students in the program will participate in two summer workshops in Washington, D.C.

The first, after their sophomore year, will introduce them to the complexity of the science policy process and the key players in it. “They will get to see how the whole process works – the sausage-making of science policy and science funding, and the innumerable connections between science and society,” says Bennett, who for ten years has run Science Outside the Lab, a similar D.C.-based workshop offered by ASU’s Consortium for Science, Policy and Outcomes for graduate-level students.

Bennett says that both data and anecdotal evidence show that this workshop is often a turning point in participants’ careers, including his own when he moved from chemistry to science policy 12 years ago. “People find the space in that process that they want to be part of,” says Bennett.

After their junior year, students reconvene in Washington, where they will undertake research projects based on their individual interests. They’ll also receive training on how to communicate their ideas to various audiences. Beyond the educational benefits, the workshops will also help to promote networking among the geographically distributed participants.

Throughout the program and potentially beyond, a faculty member who is established in the field at the participant’s home institution will provide mentorship and support. “There are many places where people can get off the highway en route to a career in STS or science policy,” says Bennett. “Sometimes it’s because they’re making active choices to do something else, but sometimes it’s because they’re not sure how to keep going or what to do next.” Mentors will be able to guide students to not only figure out their specific interests, but to develop education and career plans to pursue those interests.

“Mentors can provide substantive engagement on topics that students might want to pursue,” says Gwen Ottinger, assistant professor of history and politics at Drexel University and one of the faculty mentors for the program. “If a student goes to the D.C. summer workshop and comes back jazzed about some idea, a mentor can help him or her construct independent studies or find classes to support that interest.” Ottinger began her own career as an engineering major before later becoming interested in environmental justice, including the distribution of environmental hazards.

Perhaps more important than the educational guidance, however, is mentors’ tacit knowledge from working in the field. “Students may not know, for example, that they shouldn’t be expecting to foot the bill for a PhD program. There are fellowships for that,” says Ottinger. “Mentorship is a way of making pathways visible to students that wouldn’t be visible otherwise.”

Another of the faculty mentors is Luis Campos, associate professor of history at the University of New Mexico. “I never in my life thought I’d be a historian of science,” says Campos, who initially majored in biology but was always attracted to electives that looked at the history of science.

“History offers a way to think about science with a different analytical lens. It’s a way to bring a richer, deeper understanding of science as a cultural and human thing,” says Campos. “This program is a great opportunity to bring more students into STS and show them how the history of science can play a key role in understanding science better.”