When Markie the Sunspot was visiting ASU’s campuses last year, Sun Devils who weren’t familiar with his story didn’t understand that he’d been there all along. Shad Hanselman, senior director of annual giving for the ASU Foundation, says Markie has had a presence at ASU since the university’s earliest days.

“Markie the Sunspot is the walking embodiment of philanthropy at ASU,” says Hanselman. “He’s enthusiastic and tireless in pointing out all the places and ways the generous support of donors makes a difference. Anywhere Sun Devil pride and philanthropy come together, you’ll find Markie.” 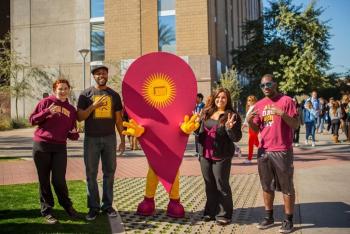 Hanselman says that’s why Markie has been even more visible the past few weeks, posing for pictures and giving out hugs on all four campuses. He’s reminding Sun Devils that Mark It Day is here. The second annual social media-based fundraiser begins at 12:01 a.m., March 6 and ends 48 hours later. The public can watch the campaign unfold at markitday.asu.edu, which includes a live, interactive Markie Map, and follow Markie’s progress on Facebook, Twitter, Instagram, Vimeo and Tumblr.

“Mark It Day began last year as a one-day campaign to support ASU,” Hanselman says. “We didn’t know how successful it would be, but it literally made history. In only 37 hours, Sun Devils across the country – even a few around the world – joined together to raise more than $170,000, benefiting students, faculty and programs on every ASU campus. It was the largest single-event fundraiser ever at ASU,” Hanselman says.

For 2014, Mark It Day has become even more, Hanselman says. “It’s not simply a way for us to ask people to donate. It’s really a 48-hour celebration to remind people of the proud role that hundreds of thousands of generous donors have in the history of ASU.

“ASU began with a single gift,” says Hanselman, referring to George and Martha Wilson’s donation of their Tempe pasture to become a territorial school campus. “That spirit of philanthropy has been going strong for nearly 130 years, making ASU the amazing institution it is today.

“That’s why Markie is so important for us,” Hanselman continues. “On Mark It Day he shows how alumni, parents, friends, students, faculty, staff – everyone who supports ASU – can direct their gifts to the colleges and programs they choose.”

As it was last year, the fundraising goal for Mark It Day is a nod to ASU’s fall 2013 enrollment: $76,611. But Hanselman says the more important figure will come at the end of the social media-based campaign. “Mark It Day is as much about people as it is about dollars,” he says. “Markie isn’t just asking people to give. He’s reminding them that, when they do, they’re joining the generations of ASU friends and family who have built a university that makes us all feel proud and inspired. They’re truly making their own marks on history.”

A group of neuroscience grad students are reaching out to grade schools to encourage students to get involved in science.

When a Valley middle school teacher asked Pat McGurrin to teach children about the human brain during a school “science day,” he jumped at the chance to share his passion. McGurrin is, after all, a doctoral student in Arizona State University’s neuroscience program in the School of Life Sciences. He investigates the areas of the human brain that control hand grasping. After earning his doctorate, he hopes to transition into a clinical setting and create new rehabilitation models that would improve motor function in people with damage to their nervous system.

McGurrin is also a member of GAINS (Graduate Association of Interdisciplinary Neuroscience Students), a student-led and organized group whose mission includes introducing children to neuroscience. He and other GAINS members are reaching out to grade schools to encourage students to get involved in science. 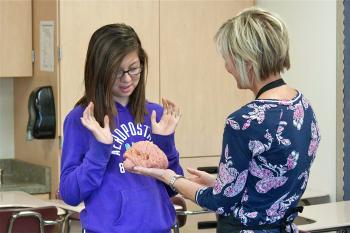 “Exposing children to the excitement found in science is really important for kids of all ages, particularly for younger students from kindergarten through eighth grade,” McGurrin said. “This was a perfect opportunity for us to get into the classroom and start making a difference.”

Together with fellow graduate students Mari Turk and Josh Klein, also with the Neuroscience Interdisciplinary Graduate Degree Program, McGurrin recently spent a day at Gavilan Peak middle school in Anthem giving presentations about the brain to students in grades five through eight. They covered a wide array of information, adjusting their explanations and activities to a level appropriate for each age group. McGurrin’s group found that regardless of age, the students were curious and wanted to learn more.

“These are bright grade-school students – they asked a lot of really solid questions,” McGurrin said. “I’m hoping that by combining their previous exposure to science with the information we gave them, they left with a new level of enthusiasm and love of science.”

According to McGurrin, the children were especially curious about the brains of family members, more so than their own. When they discussed memory and motor control and how they work in the brain, many students asked about relatives who suffered a stroke or were affected by Alzheimer’s disease.

“It was a little hard to deal with, but some of the kids asked about a relative who has some sort of issue,” McGurrin said. “We tried to fill them in about what was going on without overwhelming them.”

Many students were also curious about more light-hearted subjects, such as dreams or how memories are formed – and some even wondered whether “brain freeze” meant that the entire brain actually froze over.

By the end of their presentations, McGurrin said he felt the outreach effort was successful. GAINS currently has 25 members, but is looking to grow as an organization, as well as continue its community outreach.

School of Life Sciences is an academic unit of the College of Liberal Arts and Sciences.