For patients suffering from severe pulmonary diseases including emphysema, lung cancer or fibrosis, transplantation of healthy lung tissue may offer the best chance for survival. The surgical procedure, however, faces two primary challenges: an acute shortage of donor lungs and rejection of transplanted tissue by the recipient’s immune system.

Now Daniel Weiss at the Vermont Lung Center (principal investigator for this project) in collaboration with Cheryl Nickerson and her colleagues at the Biodesign Institute at Arizona State University are exploring a radically new approach for developing viable lung tissue suitable for transplantation. The technique is being developed under a $3.4 million grant from the NIH to Weiss, $1.2 million of which is going to Nickerson for these studies. If successful, it could ultimately provide a virtually limitless supply of donor lung tissue while avoiding the host rejection that has long plagued organ transplantation. 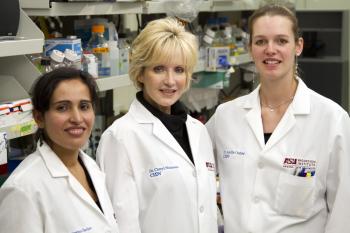 While some biological structures (including bladder and skin) may be grown in the laboratory, building a complex organ like a lung from scratch is outside the realm of current medical technologies. The method under study instead involves audacious new techniques of tissue engineering. An organ extracted from a cadaver is chemically stripped of cells – a process known as decellularization – leaving behind a delicate architecture of the extracellular matrix. This scaffold is then recellularized – that is, repopulated using stem cells drawn from the intended transplant recipient.

Though they occur in all multicellular organisms, stem cells are exceptional biological entities. Different types of stem cells are being investigated in this study for the successful repopulation of the decellularized lung scaffolds. These cell types include pluripotent and multipotent stem cells. As their name implies, ‘pluripotent’ cells have the remarkable ability to form virtually any cell type in the body, including cardiac, muscle, neuron and the variety of cell types making up a functioning lung. Multipotent stem cells can give rise to a more limited number of lineages than pluripotent stem cells, but they are easier to obtain from patients and involve less downstream risks.

The working hypothesis of this study is that when stem cells are applied to the decellularized lung scaffolding, they take up residence throughout the structure, differentiating into the appropriate tissue and vasculature of a normal lung. It is believed that subtle chemical as well as mechanical forces direct this metamorphosis.

As Nickerson explains, this process of stem cell differentiation and rebuilding is assisted by placing the cells in a rotating wall bioreactor – a device that gently circulates fluid and oxygen through the cells in such a way as to mimic conditions during fetal development. Nickerson hypothesizes that the decellularized scaffolding subjected to this environment will help guide the stem cells adhering to this template to multiply and mature into the cell types essential for a functioning lung.  Because the replacement organ is constructed with the recipient’s own cells, issues of immune rejection are minimal.

As the lungs under study are recellularized, they can be carefully evaluated in terms of biomechanics, vascular perfusion and normal lung phenotype, including the production of surfactants – lipoproteins essential for proper functioning of pulmonary alveoli. To accomplish the ambitious goals of the project, Nickerson and research assistant scientists in her laboratory, Aurélie Crabbé and Shameema Sarker, are part of a multidisciplinary team, which includes experts in lung biology, stem cells and regenerative medicine, thoracic surgery and bioengineering.

In addition to the NIH grant, work related to the lung recellularization project was honored as a recipient of the 2010 ASU/Mayo Clinic Seed Grant program. A review committee, made up of physicians and researchers from ASU and the Mayo Clinic, Phoenix, selected the work as one of the most outstanding grant proposals to be awarded funding. “Our end goal is to build new lungs from patient’s own cells, overcoming the need for donor organs,” says researcher Crabbé. “I am thrilled to be part of this exciting effort.”

In addition to her appointment at the Biodesign Institute, Cheryl Nickerson is a professor in the College of Liberal Arts and Sciences, School of Life Sciences.

The Pat Tillman Foundation has chosen Arizona State University as University Partner for the 2012/2013 academic year in support of the Tillman Military Scholars program, which provides scholarships

The Pat Tillman Foundation has chosen Arizona State University as University Partner for the 2012/2013 academic year in support of the Tillman Military Scholars program, which provides scholarships for active and veteran service members as well as their spouses.

ASU joins Eastern Kentucky University and the University of Minnesota as new partners, along with 11 other returning university partners nationwide. 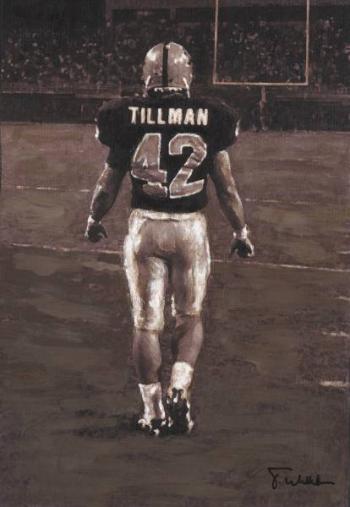 “We are truly honored to be chosen as a University Partner for the Tillman Military Scholars program,” states Chris Rauschenbach, ASU program manager for Veteran Services. “We recognize the financial challenges some veterans and their spouses face as they seek to get an education. This program is great for meeting such needs while encouraging recipients to stay engaged in their communities.”

In 2008 the Pat Tillman Foundation established the Tillman Military Scholars program, dedicated to supporting educational opportunities for service members and their families by filling the financial gaps in the Post-9/11 G.I. Bill. The Tillman Military Scholars program covers not only direct study-related expenses such as tuition and fees, but also other needs, including housing and childcare.

Over the past three years, the Pat Tillman Foundation has awarded over $2.2 million in scholarship funds to 171 Tillman Military Scholars pursuing education at every level from freshmen undergraduates to doctoral candidates.

The application to become a Tillman Military Scholar opens on Feb. 13, however, eligibility rules and criteria are currently available. Applicants need to be full time students pursuing an undergraduate, graduate or post-graduate degree. Students are encouraged to start early by writing the required essays. Learn more about eligibility and criteria at http://www.pattillmanfoundation.org/tillman-military-scholars/apply/.

In 2011, ASU opened the Pat Tillman Veterans Center on the Tempe campus to connect veterans to academic and student support services. Selection as a University Partner of the Pat Tillman Foundation is complementary to the center’s mission and indicative of the commitment ASU has made to our military veterans. Partner Universities share a special allocation of the scholarships  – qualified ASU applicants are now three times more likely to become a Tillman Military Scholar.