This year’s event will feature distinguished scholar, Regenia Gagnier, professor of English and Senior Fellow of the ESRC Centre for Genomics in Society (Egenis) at the University of Exeter, U.K. 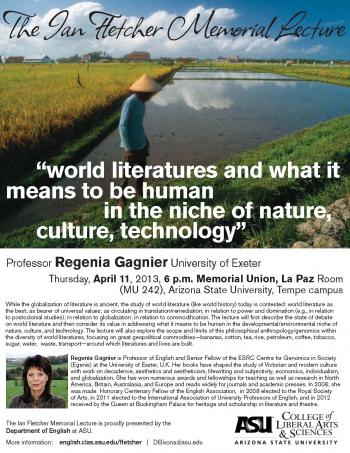 In her talk, “World Literature and What It Means to be Human in the Niche of Nature, Culture, and Technology,” Gagnier will consider the “great geopolitical commodities – bananas, cotton, tea, rice, petroleum, coffee, tobacco, sugar, water, waste, transport – around which literatures and lives are built.”

Gagnier has won numerous awards for her transdisciplinary teaching and scholarship on Victorian literature and modern culture. In 2006, she was made Honorary Centenary Fellow of the English Association, in 2008 elected to the Royal Society of Arts, in 2011 elected to the International Association of University Professors of English, and in 2012 received by the Queen at Buckingham Palace for heritage and scholarship in literature and theatre.

The Fletcher lecture series was established in 1991 and hosts prominent scholars in literary studies. The series’ namesake, Ian Fletcher (1920-1988), was a beloved member of the Department of English at ASU. A prominent scholar of late nineteenth-century English literature, but also a renowned poet and playwright, Fletcher bridged the creative and the scholarly, conveying a special sensibility for literary studies.

On this, the 25th anniversary of Fletcher’s passing, ASU celebrates his many achievements and enduring contributions as a professor for the Department of English. Also of note: Hayden Library houses the Ian Fletcher Archives in its Special Collections, with approximately 1,500 items primarily focused on the late Victorian period.

For more information about the speaker or the lecture series, please visit the website: http://english.clas.asu.edu/fletcher.

The ASU women now hold five top-ranked marks in the NCAA this season.

At approximately 6 p.m., PT, on April 6, the Sun Devil track and field team welcomed over 1,000 in attendance to the 34th Annual Sun Angel Classic with a range of fireworks. Little did those fans know that that would be just the first of the fireworks they would be privy to over the course of the evening.

Despite the fact there were over 1,000 entries to Saturday’s collegiate/post-collegiate entries, the toughest part of the night came in the decision as to which performance to publicize first for the Sun Devils. 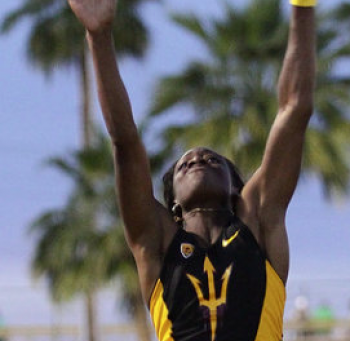 One way or another, there were two school records set in the women’s premiere section on Saturday evening and numerous stand-out performances through the night in one of the most elite events on the Western half of the United States on Saturday.

Christabel Nettey and Shelby Houlihan each demolished some of the longest-standing school records in ASU history on Saturday evening, with Nettey claiming the long jump record and Houlihan clocking the fastest 1,500-meter time in school history.

In a rematch of this season’s NCAA indoor long jump title, Nettey – a senior – showed Kansas’ NCAA Indoor Champion Andrea Geubelle that a repeat will require some work as the senior logged two jumps of 6.75m (22-01.75) to match the meet and Sun Angel Stadium record, which had lasted since. Houston’s Carol Lewis also cleared the same distance in 1983.

Nettey - who finished as the runner-up to Geubelle at the NCAA Indoor Championships - put on a show as she set the school record on her very first leap with a jump of 6.69m. That knocked off one of ASU’s longest standing school records – a 6.62m (21-08.75) jump back in 1989.  Nettey is now the national leader in the event.

As if that weren’t enough, Nettey also clocked the eighth-fastest 100-meter hurdle time in school history with her new career best of 13.42 to finish second.

Another long-standing school record was the women’s 1,500-meter mark of 4:17.98, which was set by Priscilla Hein back in 1999.  Houlihan smashed that record with her time of 4:13.64 on Saturday in a race that actually featured Hein (though under her maiden name of Schultz). With the performance, Houlihan now holds the school’s indoor 800m and mile records as well as the 1,500-meter run. She also is the national leader in the 1,500m as well

Houlihan would go on to clock a 54-second split as she helped her 4x400-meter relay teammates of Sarah Geren,Alycia Herring and Brianna Tate clock a fourth-place finish in 3:37.37.

Junior Anna Jelmini had an impressive weekend as she scored a new career-best mark of 60.51m (198-06) in the discus at the Mesa Classic on Friday for another national mark for the Sun Devils before winning Saturday’s event with a throw of 59.16m (194-01) to finish as the runner-up and top collegian in the field.

The Sun Devils now how five individuals ranked as the No. 1 athletes in the country in their respective events on the women’s side, following Keia Pinnick national-leading mark in the heptathlon yesterday and Chelsea Cassulo’s national lead in the hammer throw.

For the ASU men, junior Ryan Milus opened up his outdoor season with a wind-legal 10.29-run in the premiere section of the 100-meter dash to score the victory in the second-fastest wind-legal time of his career while Devan Spann clocked a time of 21.12 for a new career-best in the 200-meter dash in a fourth-place finish.

The two would team up with Will Henry and Chris Burrows to win the 4x100-meter relay in 39.65, marking the first time this season that ASU has legally gotten the stick across the finish line.

Spann, Henry and Burrows would return later alongside Daryl Morales to record a new season’s best in the 4x400-meter relay in a runner-up finish in 3:06.12.

The men’s 1,500-meter run was electric as Nick Happe ran the race of his life in a new career-best of 3:42.78 to finish as the top collegian in the field while clocking the fourth-fastest time in ASU history.

Teammate Darius Terry was seventh in the race in a blitzing 3:43.97 as he logged the ninth-fastest time in ASU history.

The Sun Devils will return to action this weekend in a rare dual meet, heading to Baton Rouge, La., to square off the LSU Tigers this Saturday, currently ranked In the top-10 nationally on both the men’s and women’s side.