Leader of 'inactivity studies' tackles obesity head on, from every angle

Co-workers wear their walking shoes if they’ve scheduled a meeting with Dr. James Levine, co-director of the Mayo Clinic/Arizona State University Obesity Solutions Initiative. He’s not known as the leader of the emerging field of “inactivity studies” for nothing.

Levine and his colleagues head out to the Secret Garden near his office at ASU’s West Hall to walk as they talk, pacing around the enclosed area. Levine often stands at his desk to have a phone conversation, or walks on his desk treadmill as he catches up on e-mail messages. As the inventor of the desk treadmill, he finds sitting for more than an hour anathema. 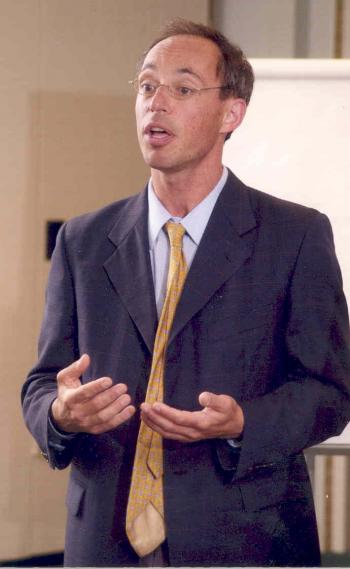 “Excessive sitting is a toxic activity,” says the energetic scientist who has devoted his career to obesity studies.

“Sedentary activity is a major health concern and there’s been a whole realization over the last five years that sitting for long periods of time is deleterious to health, far more than we ever realized.”

Americans sit more than ever before, at work, at school and even at play, and “it is literally killing us,” claims Levine. Our metabolism slows down, insulin effectiveness drops and cholesterol levels rise.

Having spent the last 25 years studying obesity from every angle at the Mayo Clinic in Rochester, Minn., Levine says activity levels are only a part of the picture, however. As an international nutrition expert who has advised the World Health Organization, the United Nations and the National Institute of Health, Levine has published more than 150 articles on building effective solutions to obesity for adults and children.

Obesity may be the top challenge to ill health in America, he says, accounting for more than half of U.S. dollars spent on health care, for lost work days, diabetes, high cholesterol, hypertension, depression, early cancer, cardiovascular disease, arthritic pain, obstructive sleep apnea and other ailments. It is a complex challenge.

“It’s not as simple as advising people to diet and exercise more, because we’ve been doing that for decades and that’s obviously not the answer,” he says. “There are multiple factors involved. Poverty, with low access to healthy food or regular exercise, is a major driver of obesity. Stress, loneliness, culture, genetics all have a role. Lack of sleep is a major driver in obesity, as is prior abuse history. There are a whole catalog of factors that are maybe even more important than diet and exercise.

“Finding the right solutions for individuals in their situation at that time that will work for them is what we’re trying to build here.”

The high octane researcher was intrigued to affiliate with ASU by the prospect of having access to a large research university that would channel its resources toward solving such a complex issue. Combining that with the expertise of Mayo Clinic seemed a natural fit.

“It blew me away, to find an academic institution that literally wanted to take a societal issue and solve it,” he says. “By joining forces with the world’s finest medical center in this endeavor, it’s like a dream team of how to impact obesity in America.

“At Mayo we have a group of physicians and scientists who are expert, skilled in the art of understanding health. Joining with ASU, having access to the scientists and mathematicians who work in complex adaptive systems, is obviously a perfect fit. We have a group of dynamic, innovative scientists and shared intellectualism to bring this to fruition. Could you think of a better combination than Mayo and ASU? If we ever had a chance to impact obesity in America, this has to be one of those opportunities.”

Levine’s sympathy for the patients he sees in his clinic is obvious. They have tried an average of 17 times unsuccessfully to lose weight, an effort he calls “heroic.” He describes their difficulties finding healthy food and a safe place to exercise, and their pain at being looked at negatively over and over. He says he would like to alleviate their suffering.

An entrepreneur at heart, the creative and engaging physician has developed activity monitors ranging from small personal devices to bike shorts with sensors mounted on the thighs and wires running to a fanny pack. Many offices at ASU now sport desk treadmills, and faculty and staff are often seen with monitors attached to their belts or pockets.

Levine hopes to attract young entrepreneurs to the Obesity Solutions Initiative and to offer corporations the chance to test their products and technologies for weight loss in an ethical and safe way.

Already a quarter of the ASU freshman class have been weighed and measured, and faculty researchers are bringing in grants to explore pieces of the solution puzzle. ASU is exploring a lease at the Downtown Phoenix campus for space for a nutrition kitchen, nursing clinic and a testing center.

Levine’s compassion and efforts extend to ending child slavery, a very personal work he began eight years ago when he interviewed child prostitutes on the streets of Mumbai while researching child labor with a UN contingent. The experience led him to write “The Blue Notebook,” a novel narrated by a young girl sold into the sex trade by her family.

His work has led him to projects in sub-Saharan Africa, Nairobi, Jamaica, China and India. He will continue his passionate advocacy against child prostitution during his work at ASU.

Levine came to Mayo Clinic and then ASU by way of the UK, where he attended the Royal Free Hospital School of Medicine in London, earning doctor of philosophy and doctor of medicine degrees. He did postgraduate internships at the Royal Free Hospital in medicine, at the Wellhouse Trust in surgery and at Mayo Graduate School of Medicine in internal medicine. He also was a fellow in endocrinology.

Levine will continue as a professor at Mayo Clinic, serving as a tenured professor in ASU’s School of the Science of Health Care Delivery in the College of Health Solutions. His appointment extends to the  School of Life Sciences in the ASU College of Liberal Arts and Sciences, as well as the School of Biological and Health Engineering in the Ira A. Fulton Schools of Engineering.

Kristy Peshlakai will teach the importance of exercise and nutrition to help people avoid diseases such as diabetes.

Kristy Peshlakai will return to her Navajo Nation home after graduating from Arizona State University to teach people how to stay healthy in the fight against chronic diseases such as diabetes and HIV. 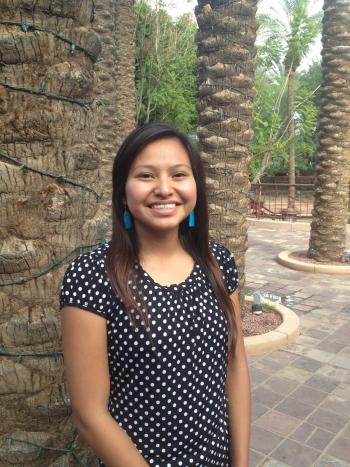 Through her exercise and wellness major, with a concentration in health promotion, the ASU senior is learning about the importance of nutrition and exercise to prevent diabetes, a disease that is common among the Native population and one that was recently diagnosed in a close relative.

“I really want to learn about this disease and how we can prevent it," Peshlakai says. "A lot of people don’t know about how food consumption can be so dangerous. There are so many foods that have a lot of fats and sugar in them. If you don’t control your blood sugar, you can lose your eyesight or have amputations. Prevention is the key before it gets serious.”

Inspiration for her chosen field came from personal experience and an internship at Northern Navajo Medical Center in Shiprock, N.M, where she worked on events such as fun walks and taught exercise and education to residents of the area, from children to elders.

“I really like seeing all the elderly, children and families coming together. It brought joy to my heart to see our Native people exercising for a good cause for their health. They would come from quite a ways to participate and enjoy their time exercising and being with other Native Americans across the reservation,” Peshlakai said.

Peshlakai will be the first in her family to graduate from college. Earning her degree is something that she is working on for herself and for her parents, especially her mother, who raised five siblings largely on her own.

“My father helped my mother along the way and he was our support too, but my mother was the one who encouraged us to get a better education,” she said. “My mother didn’t get the chance to finish her education. I am doing this for her and to make her proud. If she wasn’t able to do this then I will do it for her.”

Coming to ASU from her home outside of Shiprock, N.M. was an adjustment for Peshlakai as she became used to living in a large city and being away from her family back home. Although she was accepted at Northern Arizona State University and New Mexico State University, she chose ASU.

“One of my good friends told me about his experiences at ASU and about Native American programs and how they were very supportive,” she said.

Getting involved in organizations such as Nations helped her transition to the university.

“I was a little scared at first. When school started, I was able to adjust. I really enjoy meeting new people,” she said. “Nations is where I met different Native Americans from other campuses. We’re still friends today and encourage one another.”

“We talk to young people about our struggles and successes. Some students had similar experiences and we gave them hope that they are not the only ones who have been through a lot. We showed them that they can do it. After our presentation, some students would approach us and tell us that they want to go college,” she said.

Encouraging words that she passed on to prospective students were to get involved and meet new people through student organizations and networking. A good attitude also doesn’t hurt.

“Have that positive mindset and learn from your mistakes. Reflect back on your family that you want to make proud,” she said.

While many people leave the reservation when they go to school and never return, Peshlakai wants to earn her master’s degree so she can teach healthy habits.

“When I was growing up, I didn’t know what diabetes or HIV was. I want to be that role model in the community who steps up, makes a change, leads the community to a healthier lifestyle and decreases the rate of diabetes,” she said.