“This place is jumping,” said Jamie Spence, as she watched over her 10-year-old daughter Soleil and some of about 120 other students from Four Peaks Elementary School in Fountain Hills during their recent field trip to Arizona State University’s Tempe campus.

“They’re noisy and they can’t stand still. They’re not just standing around and staring. That tells you they’re loving this,” Marjan Hill-Enriquez said of the sizable contingent of students from Scottsdale’s Navajo Elementary School – including her eight-year-old son, Zachary – scurrying around a part of the campus. 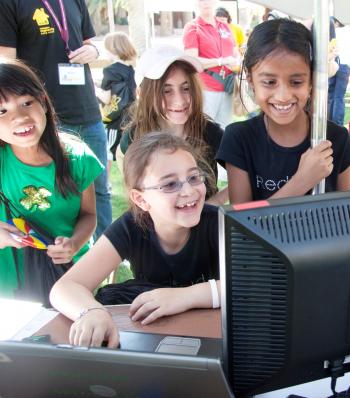 The youngsters were a part of the action on March 30 and 31 at the first-ever Engineering Open House, presented by ASU’s Ira A. Fulton Schools of Engineering  and sponsored by the major high-tech company Raytheon.

The event drew close to 2,000 visitors to see and take part in exhibits, demonstrations, games and other activities organized by more than 200 volunteers from the engineering schools’ students, staff and faculty.

Visitors saw displays of solar energy, robotics and the technological advances behind all the ever-more-versatile mobile communications devices and high-performance computers.

They toured laboratories where engineers are at work developing better biomedical devices, expanding the applications of nanotechnology, and boosting the capabilities of automobiles, airplanes, rockets and satellites.

Materials scientist and engineer David Wright, a senior researcher at ASU’s LeRoy Eyring Center for Solid State Science, gave entertaining demonstrations on the powers of electricity and magnetism – and advice on how to unleash the human powers of discovery and innovation.

They watched as melons were launched from a trebuchet (think of a cross between a catapult and a giant slingshot) built by ASU engineering students. They played computer games created by students in the university’s computer gaming education program.

“We got to see crushing,” said one young girl, describing what she saw on a tour of an engineering lab that tests the strength of concrete and other construction materials.

She was among 29 students from a fourth-grade class at Madison Heights Elementary School in Phoenix taught by Leah O’Toole, who earned a degree in education from ASU.

Like other teachers who brought their students to the Engineering Open House, O’Toole says the event helped bolster lessons K-12 teachers are providing on science and engineering by showing children and teens the impact of these fields.

“This helped them relate the technology projects we’re doing in the classroom to real science and engineering. It’s wonderful,” said Myrna Galaz, a fourth-grade teacher at Zito Elementary School in Phoenix. About 120 students from Zito came to the open house. It’s one of an increasing number of schools putting stronger emphasis on STEM (Science, Technology, Engineering and Math) education.

Kathy Carlson of Mesa brought sons Zachary, 14, and Tyler, 12, and nephew Tregor, 12, to the open house. “They’re into robotics and building things, so this is a perfect opportunity to nurture that aptitude [for engineering],” she said.

Sara and Bernie Sise of Chandler brought sons Owen, 13, and Wyatt, 10. “They love the hands-on stuff and making things. You have to let them see how their interests can translate into being a scientist or an engineer,” Sara Sise said.

Easton Mullen, a construction business owner and ASU graduate who studied in the university’s Del E. Webb School of Construction, was there with his daughter Ella. “She likes mixing stuff together and making solutions, and she likes bugs and animals,” he said. “Maybe there’s something in bioengineering for her.”

The open house was a special experience for some of the third- and fourth-graders teacher Michele Otis brought from Hamilton Elementary School in Phoenix. “This is the first time a lot of them have been on a college campus,” she said. “They are all wide-eyed. They are taking it all in. This is good for them to see.”

Air Force veteran Scott Stout was there with son Spencer and the rest of the third-grade class from Freedom Elementary School in Buckeye. The school is putting a strong emphasis on science and engineering subjects, Scotts Stout said. “So this is a great chance for them to get the big picture and to see the kind of things they can work toward for a career.”

The open house “was a charge of motivation and inspiration” for the students, he said after the event.

Parents from the Veritas home-school group in the East Valley brought eight students ranging in age from seven to 13. Parents Andy and Shale Lux earned business degrees from ASU, and teacher and mother Becky Canode earned an electrical engineer degree from the university.

“Hopefully, we have a couple future engineers here,” Canode said of her students. “They’re having a blast,” Andy Lux said. “This kind of event is a great compliment to their home-school program.”

Simultaneously with the open house, on March 31, about 30 members of the ASU student chapter of the Society of Women Engineers hosted 120 Girl Scouts for GEAR Day (Girl Scouts for Engineering Awareness and Retention). The event featured engineering-oriented activities and games.

“This gives girls a look at what careers in engineering are about, which is not something a lot of girls are getting,” said April Taylor who brought a small group of scouts, including daughters Emma, 8, and Kate, 5.

Carrie Bentley of Chandler brought a scout troop to GEAR Day at ASU for a second year in a row “because they had so much fun last year,” she said. “This is great for helping them connect [to a possible career path] at a young age. I wish someone had done that for me at that age.”

Lisa Hobi, a teacher in California, came with her sons – third-grader Spencer and sixth-grader Zachary – while her family was visiting her sister in Scottsdale. “My sons love math and science,” she said, “so they really had no problem with spending a Saturday learning some engineering.”

Jan Snyder, a program manager for ASU’s Engineering Student Outreach and Retention Program, said the open house looked – and sounded – like a success.

In his experience, he explained, a good deal of noise and a lot of talking among young students is a good sign of positive engagement in educational endeavors.

“We had a lot of noise being made by kids talking about solving the challenges presented by our hands-on activities,” Snyder said. “So I think we had some real learning going on. I think we ignited smoldering interest in engineering among many of the children.”

Among those animated, focused students were Zeke, 11, and his sister Ava, 8, from Goodyear, who worked intensely trying to improve their designs and construction of miniature carts for test-runs on an up-and-down track set up in a campus engineering design studio called eSpace.

“They would have kept at it for hours. I had to drag them away to see other things,” said their father, Shawn Vandernaalt, an ASU graduate who is now a counselor at La Joya Community High School in Avondale.

“I’m trying to feed their curiosity about all of this stuff. Any chance to expose them to [engineering and science] is good,” Vandernaalt said. “It’s not too early to get them thinking about higher education. We’ll be back here again next year.”

Who
The ASU School of Music in the Herberger Institute for Design and the Arts in conjunction with AZ Piano.

What
The School of Music is conducting a sale of pianos currently on loan to ASU from AZ Piano, May 17-20. Jason Sipe, AZ Piano store owner and School of Music alumnus, ensures each year that the ASU School of Music's student practice rooms are equipped with quality pianos.

“Without the generosity of Mr. Sipe, 30 percent of the practice rooms would be empty,” says Rick Florence, School of Music senior piano technician. “Participating in the piano sale is a great way to save money on a quality piano while supporting the School of Music.”

At the end of each school year, the on-loan pianos, as well as additional similar quality pianos, are sold at deep discounts to the general public. The proceeds of the sale are shared with the ASU School of Music and are used to purchase new pianos for the school. AZ Piano works with the school to ensure sale prices are discounted below low in-store prices. All pianos carry full warranties.

*May 17-18, ASU alumni, faculty, staff and students can make an appointment to view and purchase the sale items. Please call 480.727.6770 to book an appointment beginning May 12.

Cost
There is no cost to attend the sale.

The School of Music in the Herberger Institute for Design and the Arts at Arizona State University is ranked 19th in the country and eighth among public institutions by U.S.News & World Report. More than 100 music faculty artists and scholars work with approximately 800 music majors each year in research, performance and scholarly activities. It presents approximately 700 concerts and recitals each year. To learn more about the School of Music, visit music.asu.edu.