Bright, lively illustrations splash across the covers of small, aged booklets that comprise the IsraPulp collection at Arizona State University. The collection is the sole compilation of Israeli pulp fiction in the United States and contains a wide variety of works. Many of these booklets, known as chapbooks and about the size of a DVD case, are several decades old and representative of popular magazine style publications printed on rough, delicate chip paper. 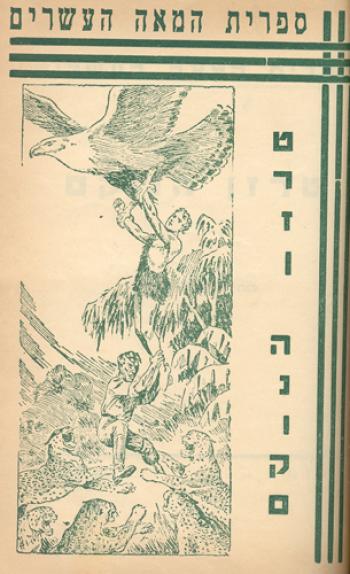 Several genres are represented in the collection, which is housed in ASU’s Hayden Library. Many of the works are Westerns, which were highly popular in Israel throughout the 1950s and 1960s. Other genres include espionage thrillers, war stories related to World War II, superhero stories, science fiction stories, and “Stalags,” a type of story that ASU Jewish Studies librarian Rachel Leket-Mor describes as “a genre that brought together American POWs during WWII, sadistic SS female guards, and a lot of imagination in what seems to constitute, in a way, the first literary responses to the Holocaust in Israel.”

Titles in this collection are distinctive and address several aspects of Israeli culture. Many of the pieces of pulp fiction were adapted from the fiction of other countries, especially the United States. “Tarzan ha-Nokem,” translated into English as “Tarzan Revenges,” is the very first Tarzan story written in Hebrew and was published in 1939.

All of the James Bond stories published in Hebrew also are in the IsraPulp collection. Secret agent stories alike to the Bond series are well represented in the works. The protagonist of “Bi-sheliḥut be-Mosḳvah” (“A Mission to Moscow”), published in 1982, is special agent Patrick Kim, a Korean who specializes in karate.

Until the 1980s, the writing and visual aesthetic of the works were created in such a way that they imitated literature that had been translated from English, even though they were originally composed in Hebrew. Characters from American popular culture such as Tarzan, Nick Carter and Shazam were often repurposed and featured in the stories. The pieces of pulp fiction demonstrate both a departure from the purist ideology in mainstream Israeli literature and the importance of the cultural exchange that has taken place between Israel and the United States, noted Leket-Mor. Simulation of fiction translated to Hebrew makes the pieces especially unique.

“These works, in their subversive way, changed the nature of the Israeli publishing industry by making the big, established publishers not only acknowledge the appeal this literature had, but also seek to profit from it and integrate it within the general literary system. The Americanization of the Israeli society is one of the outcomes of this process,” she said.

Stories focusing on Israeli characters also comprise a portion of the collection. “You Can’t Win Twice,” or “Enkha yakhol li-zekhot pa‘amayim” in the original Hebrew, published in 1967, is a rare example of a chapbook featuring a genuine Israeli agent as the protagonist. Another piece starring an Israeli agent is “‘Oz Yaoz vs. Kennedy’s Assassins,” or “‘Oz Ya‘oz neged rotsḥe Ḳenedi,” published in 1964. These works could not have been published by the mainstream publishing industry in Israel in the 1960s.

The works in the IsraPulp collection are representative of a part of the culture of Israel that was separate from the mainstream. Since many of the publishers in the mass production industry were identified with political opposition groups who did not hold the power throughout the history of the nation, some works may be seen as serving to chronicle oppositional viewpoints. Due to the low grade paper on which the stories were printed, many of these materials did not survive, making the IsraPulp collection at ASU one of the most complete representations of this unusual type of literature.

The IsraPulp collection assembled by Leket-Mor is a part of the larger ASU Jewish Studies Israeliana collection. Since these pulp fiction publications were not originally intended to be collected and preserved, the pieces are very difficult to acquire, noted Leket-Mor.

The collection began with the purchase of a dozen booklets and has slowly grown with materials acquired from Israeli collectors over the last several years. Now, the IsraPulp collection contains more than 350 items, and more than 100 are being added. The works in the collection were produced by Hebrew authors since the early 1930s, since the pre-Israel State days and into the 1980s.

Established in 2004, the IsraPulp collection has garnered interest from several academic establishments, including the University of Antwerp in Belgium and the San Francisco Jewish Film Festival, due to the rarity and uniqueness of its selection. A student from New York University has used some of the pieces to write a senior honors thesis focused on the Israeli Stalag literature of the 1960s, said Leket-Mor.

The IsraPulp collection at ASU helps to distinguish the university’s libraries, she said, noting that a set of works like this falls well within the mission of a large university like ASU. In explaining the significance of such a collection being housed at a major research university, she said, “In this day and age, when scholarly works are becoming available in digital formats or shared among libraries, librarians are encouraged to discover and develop local, unique collections that make their libraries stand out. That's what the IsraPulp collection is: A one-of-a-kind collection that draws attention to a special cultural phenomenon, a collection that puts ASU Libraries on the map together with other world-class collections.”

Other specialty collections, including those in the Arizona Historical Foundation at ASU, which Leket-Mor believes serve a similar purpose to the IsraPulp collection, include the Barry Goldwater Dime Novel Collection and the Joe E. Marks Collection of items such as popular joke books and pictures of vaudevillians.The only other area where materials such as those in the IsraPulp collection are contained is the National Library of Israel, but since the focus of that library is not popular fiction research, many records of pulp fiction there are placeholders for pieces that have been lost or damaged.

Pulp fiction from Israel demonstrates aspects of the culture and society of the nation that would otherwise have gone undocumented and how popular fiction helped to define Israeli values, Leket-Mor noted.

“The library holdings in Jewish Studies make it possible to do scholarly research at ASU on all aspects of the Jewish civilization: history, literature, sociology, art, law and politics,” said Hava Samuelson, an ASU professor of history and director of the Center for Jewish Studies.

In addition to the IsraPulp collection, the “strong Israeliana Collection in the libraries includes scholarly books, journal articles, e-books, e-journals, CDs and DVDs,” said Samuelson. “This collection has been assembled over several decades and is now managed most successfully by Rachel Leket-Mor, who has created one of the most fascinating collections in the world: the IsraPulp collection.”

The materials in the IsraPulp collection are located in the Special Collections at ASU’s Hayden Library and may be viewed in the Luhrs Reading Room. Items in the collection can also be searched online in the ASU Libraries catalogue under the keywords “popular literature Israel 20th century.” Additional information is online at http://libguides.asu.edu/content.php?pid=3168&sid=16510.

Leket-Mor’s article about the history of popular literature in Hebrew and the IsraPulp Collection is scheduled to appear early next year in Judaica Librarianship, a scholarly journal published by the Association of Jewish Libraries.

The Sun Devils led for most of the second half before Bison guard Mike Felt hit a highly-contested desperation three to tie the game at 57 with 1.8 seconds left. Felt was 1-9 from the perimeter before nailing the tying basket. ASU called a timeout and used former high school quarterback Chanse Creekmur to inbound the ball, who passed it to junior Trent Lockett who unselfishly gave the ball up to an open Felix, who hit nothing but net before his teammates proceeded to pile onto him in celebration.

Felix led the team with 15 points, but was only 2-10 from beyond the arc before hitting the game-winning three.

Arizona State survived despite sub-par offensive performances from the two leading scorers coming into the game, Lockett and sophomore Keala King. However, Lockett made his presence known by grabbing 12 rebounds and still managing 10 points. King had only three points, coming late in the second half with a three point play the possession after Felix made a four-point play.

The Sun Devils had a slow first half, starting the game 2-8 from the field, but stayed in the game through relentless work on the offensive boards. The team brought down 12 offensive rebounds out of their total 14 in the first half. ASU outrebounded NDSU 45-32 for the game.

The Sun Devils shot 34.1 percent for the game, but were 25-35 from the free throw line, going 18-23 in the second half alone. The Bison went 12-18 for the game, which tremendously impacted the result of the game.

Arizona State improves to 4-5 and gave NDSU only their second loss of the season, dropping them to 7-2. ASU takes a week off for finals and will be back in action next Saturday, Dec. 17 at 4:00 (MT) against Northern Arizona.