The center’s research encompasses development of a broad array of digital signal processing, imaging and communications algorithms for sensor technologies, including those used in chemical sensors, cell phones, and radar and sonar systems. 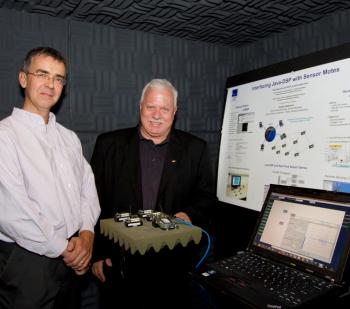 This year SenSIP has begun developing a multi-university collaboration with the University of Cyprus, Polytechnic Milano in Italy, ETH Zurich (the Swiss Federal Institute of Technology) and Boston University.

The partnership is undertaking a far-ranging project based at the University of Cyprus KIOS Research Center for Intelligent Systems and Networks to accelerate technological advancements for use in sensor networks, “smart” power grids and telecommunications systems.

The endeavor is being supported by the European Union through funding from the Cyprus Research Promotion Foundation.

Most recently, the Imperial College London, one of the leading science and engineering universities in Europe, has become a SenSIP partner.

Imperial College is the home of the University Defence Research Centre (UDRC) – funded by the United Kingdom’s Ministry of Defence – which pursues advances in signal processing technology for use in national defense systems.

A joint project involving Imperial College’s UDRC and ASU’s SenSIP has been granted support from the prestigious British Council UK Prime Minister Fund. It was one of fewer than 30 research projects selected for funding from among 230 recent proposals to the British Council.

SenSIP is directed by Andreas Spanias, a professor in the School of Electrical, Computing and Energy Engineering, one of ASU’s Ira A. Fulton Schools of Engineering.

Spanias and Thornton recently joined Imperial College professors Eric Yeatman, Athanassios Manikas and Tony Konstantinides in London to present information on their research project on nanopore sensors and give British Ministry of Defense officials an overview of SenSIP’s research.

“This provides a global forum enabling the signal-processing research community to share experiences and encourage cross-fertilization of ideas and strategies,” Manikas says.

“This collaboration will help accelerate the advance of sensor-array technology for the benefit of both countries,” says Cynthia Jaskie, president of BRE Systems, based in Scottsdale, Ariz., an information technology and computer consulting company and associate member-at-large of the SenSIP consortium.

The wireless sensor array with integrated data fusion that SenSIP will develop with its news partner “is an important technology with immediate military and security applications,” Jaskie says.

“The work will add tremendous value to the emerging portfolio of aerospace and defense initiatives in Arizona targeted at a global community,” Marvin says.

Sprint, the global voice, data and Internet services provider, will support the partnership with donation of a state-of-the-art 4G network for use in research on interfacing sensor networks with smart phone systems for time-critical applications.

“This research is important to Sprint/Nextel,” says Debbie Vogel, a Sprint account manager in Phoenix. “It will provide test data on the throughput and capacity of our network.”

Established in 2007, the center is part of an industry-university consortium that has attracted support from numerous companies in signal processing and communications technology industries and established collaborations with leading research institutions such as Johns Hopkins, Princeton and Purdue universities, among others.

In 2010, SenSIP earned designation as a National Science Foundation Industry/University Collaborative Research Center and became a partner with a similar consortium led by researchers at four Texas universities.
The consortium, called Net-Centric, includes major industry members such as Hewlett-Packard, Texas Instruments and Boeing.

SenSIP also collaborates closely with ASU’s School of Arts, Media and Engineering on research in sensor systems and algorithms for video and audio scene analysis for dual-use applications in security systems and computer gaming.

In addition, SenSIP research partnerships involve work on chemical sensors with ASU’s Biodesign Institute, and research on signal processing algorithms for threat detection for the Security and Defense Systems Initiative in the Ira A. Fulton Schools of Engineering.

The miscalculation of a would-be think tank

The Goldwater Institute once again comes out against ASU claiming on a false premise that it is inefficient. That statement could not be further from the truth.

The miscalculation of a would-be think tank

Editor's Note: Arizona State University responds to a false claim made by the Goldwater Institute in its Nov. 16 electronic newsletter.

The Goldwater Institute, in its Nov. 16 electronic newsletter, once again comes out against Arizona State University claiming on a false premise that it is inefficient. That statement could not be further from the truth.

Just look at the evidence.

Arizona State University is one of the most effective and efficient institutions in the nation in the production of skilled college graduates. ASU not only produces exceptional graduates, it does so at a cost that is 30 percent lower than its peers and 14 percent lower than the average spending per degree at all U.S. public research universities.

ASU was ranked fifth in the nation by the Wall Street Journal for producing the best-qualified graduates – those that are the most prepared and academically well-rounded, who fit in well with the companies’ cultures and produce the best track records. According to the publication:

"Arizona's investment in universities pays big dividends. The latest evidence is Arizona State University's high ranking among corporate recruiters. ... In tough times, ASU excels in matching students with jobs. And not just any jobs. The survey was structured to emphasize satisfying, well-paid positions with growth potential – the Holy Grail of economic development. ...  A strong pool of qualified university graduates is a long-term asset in attracting companies to locate in Arizona. Recruiters don't keep coming back if their new hires don't work out."

Given these facts, the return by the university on the modest investment in it by the State of Arizona is extraordinary.

Perhaps believing the third time would be a charm, the Goldwater Institute tried yet again to revive its argument on inefficiency by referring to its discredited report on "administrative bloat" in higher education.

Unfortunately for the Goldwater Institute, that statement is no more true today than it was when its “analyst” from Arkansas counted non-administrative employees as administrators in order to inflate the numbers and deceive those who would unquestioningly accept such a statement as fact. Arizonans are smarter than that.

For example, ASU has five counselors who work with our military veterans to ensure their academic success. The Goldwater Institute calls these individuals “administrative bloat.” Let them explain their naïve and simplistic logic to the men and women who have served this country and deserve its support in return.

Let us repeat what we said the last time the institute tried to play fast-and-loose with facts about higher education.

ASU is one of the best managed universities in the nation, producing high-value graduates at costs that are among the lowest in the country. As a result, the return on investment in an ASU education, both for the state as well as students and their parents, is exceptional. The university remains committed to this path, for the good of Arizona and its citizens, now and in the future.