ASU graduate students Katelyn Parady and Victoria Sargent tell the intriguing – and often surprising – story of the environmental past, present and future of South Central Phoenix through a comprehensive, interactive exhibit at George Washington Carver Museum and Cultural Center.

Visitors to the “Environmental Memories of South Central Phoenix” exhibit discover historic photographs and a timeline that takes them on a journey to when the area was largely agricultural and the Salt River still ran through town. In a time of segregation, the river was a place where African American and Hispanic residents could swim, relax and even catch their dinner.

According to one quoted resident: “The river was as wide from here to the freeway with water running. When I walked in there, I could feel the fish … We ate better here than at home.”

Water, vegetation, heat and environmental challenges are also examined throughout the exhibit.

Neighborhoods south of downtown Phoenix experienced a loss of vegetation as they changed from farmland in the first half of the 20th century to the urban and industrial area of today. Changes like these have contributed to an increase in the number of “misery days” of 110 degrees or hotter in Phoenix, she adds.

The stories featured in the exhibit stem from Parady’s doctoral work in the Environmental Social Science program in the School of Human Evolution and Social Change. The program was developed to meet the growing need for research on the social dynamics at the root of environmental issues.

“I spent a lot of time down here talking to residents,” Parady says. “People really wanted to talk about historic environmental change. My question was how did neighborhood environments change and why, and what’s next?”

The “what’s next” question is addressed through large canvases where visitors are asked to write their ideas on the area’s future after viewing the exhibit. Other interactive stops along the way ask questions about the area.

Viewing the exhibit has been a positive experience for residents who have seen many studies conducted in the area, but seldom share in the results.

“The residents are really excited to share their memories with the larger community in hopes of promoting positive change in the future,” Sargent says.

Sargent, who led the design of the exhibit, focuses on healing history truth and reconciliation in her joint studies in the School of Human Evolution and Social Change Museum Studies program and the New College Interdisciplinary Studies program.

“I felt it was important to incorporate interactive modules and features that encourage people to engage visually and tangibly on subjects such as heat, water, air and vegetation. There aren’t a lot of examples out there on how to make complex scientific research easily accessible to communities. Our challenge was to present the information in a way that is useful and helps trigger conversations that can lead to environmental improvements for the residents,” she explains.

Sargent’s goal was to create a visually pleasing exhibit that presents scientific data along with the voices of the community members. A barrios map incorporates many of the area’s old neighborhoods while inviting residents to add places that may have been missed.

“It is a way for residents to reclaim the history they once had in the area,” Sargent says. “Many times in the formal telling of history, the public has a voice that is not heard.”

“I am very impressed by the way these two students from different programs came together to bring this research to the community,” says ASU sociologist Sharon Harlan. “It was a lot of hard work, and shows how empowered and committed ASU students are to giving back to society.” Harlan leads the National Science Foundation funded research project “Urban Vulnerability to Climate Change” that produced much of the data featured in the exhibit.

”Environmental Memories of South Central Phoenix” is a collaborative effort between the ASU School of Human Evolution and Social Change in the College of Liberal Arts and Sciences, the Phoenix Revitalization Corporation and the George Washington Carver Museum and Cultural Center. The exhibit, presented in English and Spanish, runs from noon to 5 p.m. Monday to Friday and by appointment until Jan. 31. For more information, go to azcmcc.org or email info@azcmcc.org

A sampling of exhibit facts:

The tree-lined Arizona canal is completed in 1885.

1989 – A chemical fire breaks out at a circuit board manufacturing plant at 25th and Southern Avenues.

ASU professor Wei Li has been appointed to the national committee that will advise the U.S. Census Bureau on a wide range of variables that affect the cost, accuracy and implementation of programs.

The U.S. Census Bureau announced the establishment of the National Advisory Committee on Racial, Ethnic and Other Populations and has named ASU professor Wei Li as a member of the committee. 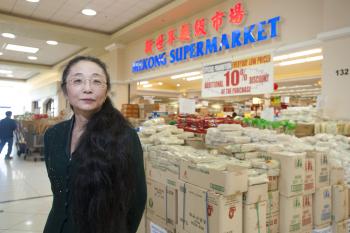 “We expect that the expertise of this committee will help us meet emerging challenges the Census Bureau faces in producing statistics about our diverse nation,” said Thomas Mesenbourg, the Census Bureau's acting director. “By helping us better understand a variety of issues that affect statistical measurement, this committee will help ensure that the Census Bureau continues to provide relevant and timely statistics used by federal, state and local governments as well as business and industry in an increasingly technologically oriented society.”

The National Advisory Committee members, who serve at the discretion of the Census Bureau director, are chosen to serve based on expertise and knowledge of the cultural patterns, issues and/or statistical needs of hard-to-count populations.

Wei Li is a professor of Asian Pacific American studies and geography in the College of Liberal Arts and Sciences at ASU, with appointments in the School of Social Transformation and the School of Geographical Sciences and Urban Planning. Her research specialties are international migration and integration, highly skilled migration and transnational connections, immigrant settlement and minority finance, focusing on the Pacific Rim. She chaired the Census Bureau's Race and Ethnic Advisory Committees on the Asian Population from 2010-2012.

Professor Li is an inaugural member of the National Asia Research Associates with the National Bureau of Asian Research and Woodrow Wilson International Center for Scholars (2010-2011), and the Fulbright Research Chair in Queen's University, Canada (2006-2007). She received the 2012 Distinguished Scholar of Ethnic Geography Award from the Association of American Geographers' Ethnic Geography Specialty Group, and the 2009 Book Award in Social Sciences from the Association for Asian American Studies for her book on suburban immigrant communities.

Li earned her bachelor's and master's degrees in geography in Beijing and her doctorate in geography at the University of Southern California.