Incoming faculty an example of ASU's commitment to diversity

Arizona State University strives to have a faculty representative of the diversity of the state and nation, and its incoming cohort is the latest example of that.

Of the more than 140 new tenured and tenure-track faculty, 28 percent (40) are minority and 42 percent (61) are female — and with many of those women in STEM (science, technology, engineering and math) fields, ASU is also a part of the larger national effort to close the gender gap in the science realm. 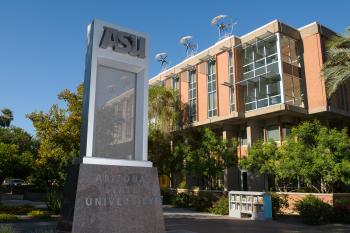 Of the more than 140 new faculty joining ASU this fall, 28 percent are minority and 42 percent are female — and with many of those women in STEM (science, technology, engineering and math) fields, ASU is also a part of the larger national effort to close the gender gap in the science realm. Download Full Image

Otakuye Conroy-Ben is the first Lakota to earn a doctorate in environmental engineering. She will research, teach and perform service at the university as a part of the Ira A. Fulton Schools of Engineering. Her plans are to work with Native American students.

“If we can get more representation of women in science and engineering, the students feel a stronger connection and more engagement to their degree, particularly the female students if they see someone in a leadership role,” Conroy-Ben said. “The same goes for underrepresented minorities. Studies have shown they can perform better in the classroom if they see someone like them leading the class itself.”

“I'm glad to see that ASU is committed to developing an academically strong faculty that also reflects the diversity of our population,” Throop said in an email. “For me, one of the really exciting things about teaching is challenging preconceived notions about who can excel in science. It is fantastic to watch students who have never envisioned themselves as scientists become empowered with the realization of their scientific skills and potential.”

Jeremi London will both teach and research in the Ira A. Fulton Schools of Engineering programs at ASU’s Polytechnic campus. She attended Purdue University, where she earned bachelor’s and master’s degrees in industrial engineering, and a doctorate in engineering education.

“The demographics of the new cohort of ASU faculty is just one more piece of compelling evidence that demonstrates ASU's commitment to recruiting top talent — regardless of race and gender,” London said. “It also reveals a culture that values diverse perspectives, and is another step in the relentless pursuit of being a model for the next generation of American universities.”

Throop is a joint hire between ASU and New Mexico State University. She’s excited to make the transition because her teaching and research can be expanded in a place with an intentional focus on cross-disciplinary work.

“My work very much sits at the junction of earth and life sciences, so I'm thrilled to be able to work between the School of Earth and Space Exploration and the School of Life Sciences,” she said. “Great science discussions with faculty from both schools during my visit to ASU last fall got me very excited about the potential for collaborative research and teaching opportunities.”

London thought ASU was a good fit for her “because of the pace of things happening at ASU and the emphasis on making an impact,” she said. “I’m looking forward to (it).”

ASU strives to have a faculty that is representative of the diversity of Arizona and the U.S., said Mark Searle, interim university provost.

“This incoming group represents an incredibly talented cadre of scholars from across the nation and around the world,” he said. “As we’ve continued to strive to generate a tenured and tenure-track faculty that reflects the diversity of our state and nation, our recruitment efforts have yielded an assembly of strong new talent.”

“We have so much latent talent and research capability in groups that have traditionally been underrepresented in the sciences,” she said. “It is fantastic to see universities and the scientific community as a whole growing to recognize that potential.”

Despite the present stillness at ASU's West campus Sun Devil Fitness Complex, Casey Monroe knows what is coming: a barrage of energetic students ready to dive headfirst into another semester.

The enormous verdant quad, a point of pride on Arizona State University’s West campus, is empty, save for a few sputtering sprinklers and the sorrowful crooning of Lana Del Rey lamenting her “Summertime Sadness.” 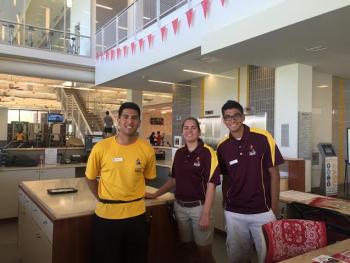 The crooning comes from speakers on the Sun Devil Fitness Complex, which flanks the southern border of the quad. But the song’s theme is perhaps a bit incongruous with the current atmosphere. Despite the present stillness, Casey Monroe knows what is coming: a barrage of energetic students ready to dive headfirst into another semester at ASU's West campus.

“Right now, it’s still a transitioning period,” said Monroe, a senior student worker at the fitness complex. But, she assures, come Thursday (the first day of classes for the fall 2015 semester), there will be hundreds filling the now nearly vacant facility.

Astrid Samaniego, a junior majoring in communications with a minor in Spanish, is one of about 15 students taking advantage of these early, slower-paced days of move-in week when places like the fitness complex can be had almost all to one’s self.

Samaniego doesn’t live on campus, but she wanted to come check out the facility anyway. She’s excited for the semester to begin and is looking forward to more of a “university feel” at West campus after transferring from Estrella Mountain Community College.

Though the indoor track and basketball court below are free of squeaky sneakers, the rows of high-tech workout equipment are mostly silent and the six-lane swimming pool outdoors is uncharacteristically placid, a mere three days’ time will change all of that.

Fitness-complex student worker Michael Imperial’s eyes light up as he describes the plethora of various inflatable activities scheduled for RecIgnite, which will take place from 7 to 10 p.m.Thursday, Aug. 20.

He describes an inflatable screen to be used for karaoke and a movie screening at the pool, an inflatable shooting range, stand-up paddle boarding and “tons of free stuff.”

“It’s going to be a lot of fun,” Imperial says.

Students interested in the event can check it out online, among several other Fall Welcome events, here.