Current visitors to the Arizona State University Museum of Anthropology are encountering the museum’s most ambitious effort yet. With a history spanning 10 years, “City Life: Experiencing the World of Teotihuacan” is an interactive, immersive exhibit featuring artifacts on loan from some of the nation’s premier museums. It is designed to not only transport visitors to the pre-Columbian city of Teotihuacan, but also to demonstrate how many of its facets – such as its use of extensive urban planning – remain relevant today.

Teotihuacan was one of the most important ancient cities of the New World. Known for its three massive pyramids lining the 1.5-mile-long Avenue of the Dead, it was once the home of upwards of 80,000 people, including soldiers, nobles and priests. 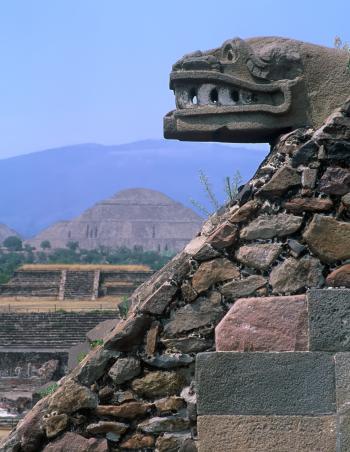 But what was life like for the everyday people of this metropolis? “City Life” delves into this question by learning from the people who currently live and work on the periphery of the city’s ruins, and by examining what the archaeological record tells us.

The result is an exhibit that engages the senses in an effort to show visitors what it felt like to be a resident of the place the Aztecs – who rose to power centuries after Teotihuacan was abandoned – deemed “the birthplace of the gods.”

Plans for the exhibition began in in 2003 with discussions that involved former museum studies professor Gwyneira Isaac and archaeologist George Cowgill. Isaac obtained an ASU seed grant for the project in 2005 and, in 2006, the National Endowment for the Humanities awarded a planning grant.

Exhibition Innovation Lab director Judy Newland is one of the long-standing players in the production’s history. She has worked on the project off and on since arriving at ASU in 2007.

In 2008 she took a team of seven people to Teotihuacan to conduct exhibition research. The group gathered sounds, video, still photography and information from the archaeologists who work at the site, as well as replicas from artisans who live and work in the adjacent town of San Juan Teotihuacan – sometimes employing production techniques that date back to the days of the original Teotihuacan.

“City Life,” in its original form, was meant to focus on sound. “Most archaeology sites are quiet and do not resonate with our lives today, so we thought sound might magically transport us back in time to get an idea of what life was like in ancient Teotihuacan,” says Newland.

Sound is, indeed, present in the current exhibit in the form of a 20-minute looped track that plays actual audio gathered from Teotihuacan, including the blowing of conch shells, artisans at work, bird calls and the frequent afternoon thunderstorms. Over the years, the concept evolved into a fuller sensory experience that involved not only sound, but also multi-media visuals and tactile elements, even diffused scents like cumin and chocolate.

Drawn into collaboration with ASU were Mesa Community College ceramics students, who worked with Asdell to produce artifact replicas and pit-fired them on the grounds of the Deer Valley Rock Art Center. The replicas are used in the hands-on section of the museum, where guests are invited to touch masks, figurines, ornaments and instruments created by the students and the San Juan Teotihuacan artisans.

Bringing the past and present together

ASU is the U.S. leader in Teotihuacan studies and is home to major scholars in the field. Chief among them are professor emeritus Cowgill, who was involved in Teotihuacan’s original mapping project in the 1960s, and research professor Saburo Sugiyama, who has worked in partnership with Mexican archaeologists to unearth spectacular discoveries from within the city’s largest pyramids.

Cowgill is responsible for founding the ASU Teotihuacan Research Laboratory, used by institutions and scholars from around the globe as the base for numerous research projects. Many of the finds that inform the “City Life” exhibit were the result of projects launched from the lab.

Cowgill is excited by this unusual opportunity to bring to the public several of the valuable insights from his and others’ academic work. He hopes that visitors come away with an understanding of how different – how much larger and more populous – Teotihuacan was from other settlements at the time.

“It is important for people to be able to look at this ancient city as an urban center with a wide socioeconomic spectrum,” he says. He points out that Teotihuacan was similar to modern metropolises in several ways, including the complexity of its many neighborhoods and the wide range of its people, from the wealthy to the impoverished.

Cowgill notes that he and Sugiyama have been part of some impressive discoveries at Teotihuacan – including the sacrificial burials of humans – but that it is often the most humble finds, like artifacts from workshops or commoners’ homes, that lend the greatest insight into past life.

“City Life” offers an array of findings, such as jewelry, figurines, ceramic vessels and fragments, and part of a mural that once decorated a room. A tribute to Teotihuacan’s revered Butterfly Warriors includes an ornately adorned incensario, one of the exhibit’s most impressive pieces. Also on hand are a stone fire god brazier from the Denver Museum of Nature and Science, a jadeite figure from the Denver Art Museum and a set of ear ornaments from the St. Louis Art Museum.

Outreach and operations coordinator Peter Banko helped research artifact holdings and arranged the loan of 43 objects from seven museums across the country.

• that the objects reflect everyday life

• that some of the items, such as the articulated figurines, are reproduced today by artisans at Teotihuacan

The museum as laboratory

The museum is an arm of the School of Human Evolution and Social Change in the College of Liberal Arts and Sciences. It serves as a laboratory for museum studies graduate students and a forum for presenting faculty research to the community at large in meaningful, engaging ways.

“This has been an immense undertaking for the museum’s small staff, dealing with loans from major museums and sophisticated technology,” Newland says. “However, this past year, we had a ‘perfect storm’ of graduate students that came together to create sound compositions, edit hours and hours of video, and build and assist with the design of the exhibition. It would never have happened without this group of talented and dedicated museum graduate students.”

Newland is referring in particular to Asdell, along with Stephen Reichardt, who handled the sound component, and Ken Fagan, who took charge of the video.

Museum director Richard Toon summed up the exhibit team’s primary challenge: “How do you take all of this information and make it relevant in 2,000 square feet?”

He is ecstatic about the resulting multimedia experience, as well as the production’s range of opportunities for students to apply their knowledge and training. “With video, art and construction, it has it all going for it,” he says.

Toon hopes visitors not only learn about Teotihuacan, but also take away the message of cultural continuity. “We shouldn’t think of past cultures as disappeared,” he says. “They have a continued life in another form. They remain relevant.”

Another note of relevance: “City Life” is the ASU Museum of Anthropology’s first completely “green” exhibit. Homasote wallboard, made from compressed recycled paper, was the principal construction material. All other materials were from sustainable supplies or were repurposed from past exhibits. In addition, the lights are LED and paints are low- or no-VOCs.

“City Life: Experiencing the World of Teotihuacan” will run through May 9, 2014. The ASU Museum of Anthropology is open weekdays, 11 a.m.-3 p.m. It is part of the School of Human Evolution and Social Change in the College of Liberal Arts and Sciences and is located in the SHESC building, on the northwest corner of Tyler and Cady Malls on the Tempe campus. Admission is always free.

ASU held a ceremony Oct. 23 to mark the official opening of the new McCord Hall at the W. P. Carey School of Business.

One of the nation’s largest and highest-ranked business schools dedicated a brand new, state-of-the-art facility this week. The W. P. Carey School of Business at Arizona State University held a ceremony Oct. 23 to mark the official opening of its 129,000-square-foot McCord Hall.

“We believe we’ve built the most advanced learning environment available for graduate business students,” says Amy Hillman, W. P. Carey School of Business dean. “Every detail was designed to teach students in a way that makes them better contributors to today’s work environment. The building has an emphasis on collaboration, discussion-based learning and flexibility.” 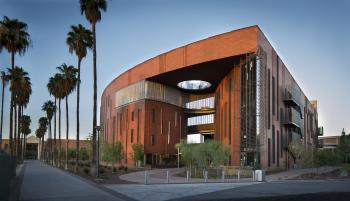 The new building is being added to the school’s two existing structures, which were renovated during this project. Together, they will ease overcrowding for the 10,000-plus students who attend the W. P. Carey School. McCord Hall will be home to the school’s graduate and executive-education programs, including the top 30 nationally ranked MBA programs.

The impressive facility features modern architecture, technologically advanced tiered and flat classrooms, a multipurpose event space, a new graduate-level career center, team rooms, study areas, outdoor assembly areas, a lounge for honors undergrads and a health-conscious cafe. McCord Hall is also environmentally friendly, with less water and energy use than similar buildings and a solar array that returns power to the campus grid. The project totaled $57 million and the return on investment is expected to be great.

“We estimate the project has already had an economic impact on the gross state product of $64 million and the creation of 880 jobs,” says professor Dennis Hoffman, director of the L. William Seidman Research Institute at the W. P. Carey School of Business. “Of course, the value of the construction does not include the added value that will accrue from the human capital produced in McCord Hall's learning environment, allowing students to acquire knowledge and skills to compete in today's economy.”

ASU President Michael Crow, W. P. Carey School Dean Emeritus Robert Mittelstaedt and Hillman presided over the dedication ceremony at the university’s Tempe campus. Philanthropist Sharon Dupont McCord and other building donors also took part. McCord and her late husband, Bob, are the major donors behind the facility’s name. More than $17 million in gifts and pledges from area companies and families, as well as other various sources, are helping to fund the building. Student support has been robust.

To learn more about the W. P. Carey School of Business, visit wpcarey.asu.edu. For more information about McCord Hall, go to http://building.wpcarey.asu.edu/. Donations to the building campaign can still be made at asufoundation.org/wpcbuilding. The W. P. Carey School’s full-time MBA, evening MBA, online MBA and undergraduate business programs are all currently ranked top 30 in the nation by U.S. News & World Report.