Are we losing our humanity? This is the question that Arizona State University's Project Humanities has continually raised through meaningful discussions and activities.

This fall, Project Humanities presents a series of events — as part of its Humanity 101 initiative — showing that although injustices still exist, we are far from losing our humanity. The series will include guest speakers, educational workshops and community outreach activities that pose reflective questions and analyze current cultures. 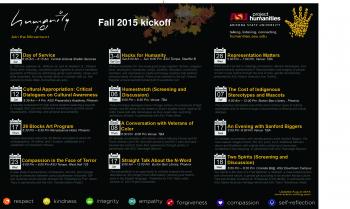 The Humanity 101 series will also focus on creating solutions through events such as Hacks for Humanity, a 36-hour hackathon that brings together developers, artists, students and community members to create technology solutions that address pressing social needs.

“We are the facilitator of conversations between diverse groups of people,” said Abigail Graham, president of the student initiative and a secondary education sophomore. “We bring together ... and challenge people across the humanities and other disciplines to connect with one another and rethink their perspectives through conversations that we generally don’t get to have on a daily basis.”

“It seems almost impossible these days for people to truly dialogue about sensitive issues facing our society," said Sarah Tracy, Project Humanities partner and a professor at ASU's Hugh Downs School of Human Communication. "ASU’s Project Humanities provides a safe, smart and supportive context for people to hear about and authentically discuss the issues that make a huge difference on our quality of life, but are too rarely hushed, sugar-coated or shot down in other venues.”

On Sept. 23, Tracy is lecturing on how one woman’s compassion toward a gunman saved a Georgia school from a would-be mass shooting in 2013.

Visit the fall 2015 calendar for a full listing of events. Events are free and open to the public unless otherwise noted.

Arizona State University will lead the National STEM Collaborative, a consortium of 19 institutions of higher education and nonprofit partners committed to supporting minority girls and women in STEM fields.

The White House has announced that Arizona State University will lead the National STEM Collaborative, a consortium of 19 institutions of higher education and nonprofit partners committed to supporting minority girls and women in STEM fields.

The announcement by the White House Council for Women and Girls reflects the national recognition earned by ASU’s Center for Gender Equity in Science and Technology and the center’s executive director, Kimberly A. Scott, in encouraging greater access to STEM (science, technology, engineering and mathematics) for women and girls of color. 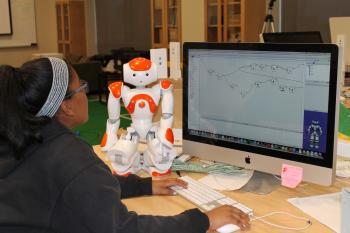 “Too many African-American, Latina and Native American women are pushed out of the STEM experience in college,” said Scott, who also founded the nationally lauded CompuGirls program, which introduces young girls from under-resourced school districts to technology. “Today’s announcement will help empower young women.”

There are many reasons why women do not enter and persist in STEM fields. Members of the National STEM Collaborative are committed to exploring those reasons and implementing scalable solutions.

“We need to transform the way STEM is taught,” said Jo Handelsman, associate director of the White House Office of Science Technology and Policy. “By encouraging innovations in STEM teaching, addressing the issue of bias, and also awareness of the types of teaching we use, we are trying to promote positive images of scientists and engineers and promote new ways of teaching that will benefit a broad group of diverse students.”

ASU’s Center for Gender Equity in Science and Technology (CGEST) sees a transformative mission for the collaborative: not simply filling the STEM pipeline with more girls and women of color, but creating an environment in which that happens naturally.

Members of the collaborative will help assemble a tool kit and online workshops, train hiring managers and key personnel in addressing bias, track the experiences and support of women of color in STEM majors and build a database of programs that help them.

ASU senior Courtney Besaw, who is studying psychology, has seen firsthand the challenges for women in pursuing a degree in a STEM field.

“I think the biggest challenge is feeling the need to prove yourself,” Besaw said. “Most of my professors are male … Sometimes I feel the need to be the best in order to prove that I deserve to be there just as much as my other classmates.”

ASU’s leadership role follows a July roundtable on inclusive STEM education, co-hosted by CGEST and the White House Council on Women and Girls. CGEST takes an active role in shaping the conversation surrounding gender equity in STEM, including through such initiatives as CompuGirls.

“Programs like CompuGirls are a good start,” said Besaw. “Getting girls interested, involved and motivated early may help push some students from the ‘want to do’ mentality to the ‘can do’ mentality.”