Hubble unveils its most colorful view of the universe

Astronomers using the Hubble Space Telescope have assembled a very comprehensive picture of the evolving universe – and the most colorful. This study, called the Ultraviolet Coverage of the Hubble Ultra Deep Field (UVUDF) project, provides the missing link in star formation, say researchers.

Prior to this survey, astronomers were in a curious position. They had knowledge of star formation in nearby galaxies from missions such as NASA's GALEX observatory. And, thanks to Hubble's near-infrared capability, they also studied star birth in the most distant galaxies, which appear to us in their most primitive stages, thanks to the vast light travel time involved. But for the period in between – a range extending from about 5 billion to 10 billion light-years away – they just didn't have enough data. This is the time when most of the stars in the universe were born. 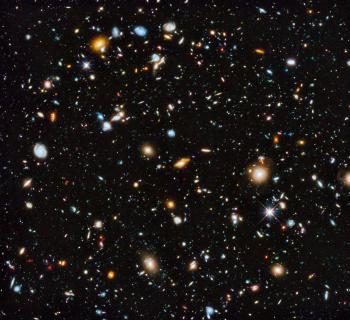 Ultraviolet light comes from the hottest, most massive and youngest stars. By observing at these wavelengths, researchers get a direct look at which galaxies are forming stars and, just as importantly, where within those galaxies the stars are forming.

Astronomers have previously studied the Hubble Ultra Deep Field in visible and near-infrared light in a series of exposures taken from 2004-2009. Now, with the addition of ultraviolet light, they have combined the full range of colors available to Hubble, stretching all the way from ultraviolet to near-infrared light. The resulting image – made from 841 orbits of telescope viewing time – contains approximately 10,000 galaxies, extending back in time to within a few hundred million years of the big bang.

Studying the ultraviolet images of galaxies in this intermediate time period enables astronomers to understand how galaxies like our Milky Way grew in size from small collections of very hot stars. Because Earth's atmosphere filters most ultraviolet light, this work can only be accomplished with a space-based telescope.

The Hubble Ultra Deep Field 2014 image is a composite of separate exposures taken from 2009-2012 with Hubble’s Advanced Camera for Surveys and Wide Field Camera 3.

“It's the deepest panchromatic image of the sky ever made. It reaches the faintness of one firefly as seen from the distance of the moon,” says Rogier Windhorst, professor at the School of Earth and Space Exploration in Arizona State University’s College of Liberal Arts and Sciences.

"Ultraviolet surveys like this one, using the unique capability of Hubble, are incredibly important in planning for the James Webb Space Telescope," explained Windhorst, a team member. "Hubble provides an invaluable ultraviolet light dataset that researchers will need to combine with infrared data from Webb. This is the first really deep ultraviolet image to show the power of that combination."

When better reductions of these ultraviolet images became available earlier this year, Windhorst made properly weighted stacks of the 13-filter images and put them together in a final color mosaic. This was then perfected by Zolt Levay at the Space Telescope Science Institute.

ASU students will use images like these to analyze in detail the cosmic star-formation during the last 10 billion years. Such studies have become possible thanks to the unique ultraviolet imaging capability of Hubble's Wide Field Camera 3 (WFC3), the last camera installed into Hubble in May 2009. ASU has had major scientific involvement in WFC3 since the designing and building of it started in 1998.

Tillman Military Scholar Diana Kramer adds to extraordinary military career with her pursuit of a psychology education and desire to be a role model for children.

“I guess it’s dangerous, at least that’s what they tell me,” she deadpanned. “When I enlisted in the Air Force, I qualified for a number of jobs. They told me that an Explosive Ordnance Disposal (EOD) specialist gets to blow stuff up and work with robots. It sounded like fun.” 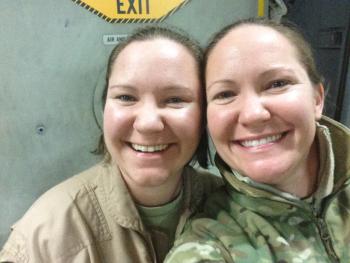 An ASU student veteran pursuing her online degree in psychology, Kramer was recently named a 2014 Tillman Military Scholar by the Pat Tillman Foundation in recognition of her service, leadership and academic excellence. She has been deployed twice each to Iraq and Afghanistan. Her career goal is to help counsel fellow veterans coping with the symptoms of Post-Traumatic Stress Disorder (PTSD).

Kramer remembers that she and her twin sister, Jenna, were self-described “silly girls,” encouraged by their mother and stepdad to develop outdoor pursuits – from fishing, mountain biking, skiing and snowboarding to Kramer’s new favorite pastime, landscape photography. Her past three years stationed at Eielson Air Force Base near North Pole, Alaska, has made it easy to continue indulging her love of the great outdoors. Currently, she is transitioning to Minot Air Force Base in North Dakota, where she was recently reassigned.

It was more than a decade ago that Kramer was working part-time at a Tahoe ski resort and taking local community college classes with plans of becoming a writer. Then her stepdad suggested she talk with a military recruiter. Kramer did and decided to join the Air Force, training to become an EOD specialist – an expertise shared by only 20 or so other enlisted women at the time. With America fighting on two fronts, she explained that EOD was in high demand by the military, mostly U.S. Army infantry and combat engineers.

Following her first deployment to Baghdad, Kramer said she realized that she was experiencing some symptoms of PTSD. “I spent seven months hunting IEDs (homemade bombs called improvised explosive devices) with the Army guys and seeing such horrific things,” she recalled. “When I got back to normal Air Force life, there was such a gap in my experience.”

Kramer said she sought counseling through the Air Force to help her cope with the stresses from her military service, as well as the pain from a marriage that was ending.

“Having a counselor who understood what it was like for me, what I was exposed to and the things that I saw – it was huge for me to get that help,” she said.

According to Kramer, it was her own positive encounter with counseling that inspired her to pursue an academic degree in psychology. Similarly, the story of a military friend who told her he was accused by a counselor of lying about his combat experiences spurred Kramer to want to make a meaningful difference in veterans’ lives.

“It floored me that someone finally had gotten past the stigma of seeking help, and was then shut down by his counselor,” she said. “It was so disheartening to hear that.”

Because her EOD specialty sends Kramer to locations worldwide, she said she searched for an academic program that was online, flexible and “not a degree factory.” Not only did ASU’s online bachelor’s degree in psychology fit the bill, but Kramer also appreciated the university’s special attention to student veterans through its Pat Tillman Veterans Center. “What I like about ASU is that it seems like they really care about their military students,” she said.

Kramer explained that she works like a carpenter, always thinking two steps ahead, and so is already looking at graduate programs that would qualify her to become a clinical psychologist. In addition, she said another reason to complete her degree is so she can become a role model for the children she hopes to parent.

“I don’t have children yet, but I do want to be a mother someday,” Kramer said. “And I want to be a role model for my children. I want them to look up and say, ‘My mom could be in the Air Force and disarm bombs. And my mom went to college and got her degree. And if my mom could do it, I can do it, too.’”