The birth control shot offers a convenient alternative to women who don’t want to remember to take a daily pill. Ironically, recent research from ASU’s Bimonte-Nelson Memory and Aging Laboratory has shown the shot may not be helping memory. In fact, it may be harming it.

The study is currently in press in the journal Psychopharmacology. It connects medroxyprogesterone acetate (MPA), the hormone active in the birth control shot Depo Provera and many widely used menopausal hormone therapies, to impaired memory in rodents. 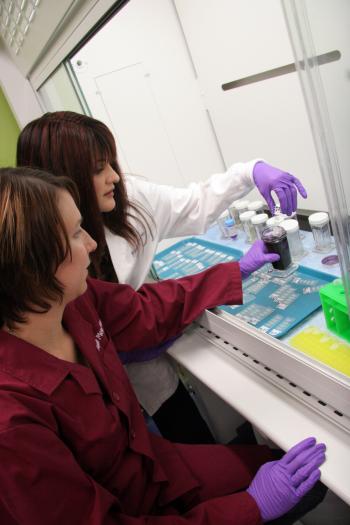 The study was led by psychology doctoral student Blair Braden and Heather Bimonte-Nelson, associate professor of psychology in the College of Liberal Arts and Sciences and director of the Bimonte-Nelson Memory and Aging Lab. The work was done in collaboration with Laszlo Prokai from the University of North Texas Health Sciences Center and Alain Simard from Barrow Neurological Institute.

The Bimonte-Nelson lab first linked MPA to memory loss in rats while studying it as a component of hormone therapy for menopause. This earlier study showed that MPA impaired memory in menopausal-aged rats, and was published in November 2010 in Neurobiology of Learning and Memory. The current study specifically looks at the drug in relation to the birth control shot.

Bimonte-Nelson said she and Braden began asking questions about the effects of the drug because Braden was concerned about friends taking MPA as a contraceptive.

“Does it have the same memory-impairing effects if someone takes it as birth control, when they are a younger age?” asks Braden.

“This is an important question, because what we are going to have in our future are women who are menopausal that also have a history of taking MPA as birth control when they were younger,” adds Bimonte-Nelson.

The U.S. Food and Drug Administration originally approved Depo Provera for use in October 1992. It requires an injection every 12 weeks. Less than one percent of women get pregnant when using the birth control shot, according to Planned Parenthood. Its effectiveness and the infrequency of doses can make the shot an attractive alternative for women seeking to avoid pregnancy. While other studies have examined Depo Provera’s effects on bone density, Bimonte-Nelson’s lab is the first to explore its effects on cognition. The researchers note that other forms of hormonal contraception, such as the pill, do not use MPA.

The study lasted approximately a year, using three groups of rats, plus a control group that did not receive the hormone. The first group only received MPA as young adults, to model birth control. The second only received it post-menopausal to model hormone therapy. The third group received it at both young adulthood and maturity, to model women who used it for birth control and as a post-menopausal hormone therapy.

“What we found was pretty shocking – animals that had been given the drug at any point in their life were memory impaired at middle age compared to animals that never had the drug. We also confirmed that in the subjects that only received the drug when young, the hormone was no longer circulating during memory testing when older, showing it had cleared from the system yet still had effects on the brain,” says Braden.

To test their memory, rats were placed in various water-based mazes to seek out hidden platforms in the water.

“They can swim, but they don’t particularly like to, so they are motivated to find the platform,” says Braden.

The researchers also measured a marker of the gamma-aminobutyric acid (GABA) neurotransmitter system in the hippocampus of the rats’ brains to determine MPA’s physiological effects.

“GABA is important for a lot of things, and we know it is important for memory,” says Braden. “What GABA does is slow the brain down. It’s inhibitory. So if there is too much of it, it can make it more difficult to produce memories. But then if there’s too little of it and there’s too much excitation, same thing—it makes you not be able to produce memories correctly.”

Animal models are the first step in determining a drug’s effect, but they can’t definitively prove a link in humans. That’s why the researchers are beginning to proceed to the next step, human evaluations.

The birth control research contributes to the lab’s aim of better understanding how hormones affect memory. Bimonte-Nelson is particularly interested in how this happens as we age.

“You really cannot understand aging without understanding menopause or reproductive senescence, because hormones change as aging ensues. As well, you cannot talk about aging and cognition and gain insight into those dynamic and interrelated changes without acknowledging that both hormones and aging have such a profound effect on the brain and its function,” she says.

Bimonte-Nelson’s passion for and interest in memory and hormones began in graduate school and continued into her post-doctoral fellowship, where she studied the cognitive effects of aging and Alzheimer’s disease.

While she is the primary investigator in the birth control study, Bimonte-Nelson stresses that students working in the lab are the driving force in the research.

“Without the students in my lab, we would have limited levels of productivity and output,” says Bimonte-Nelson. “It is students like Blair that have this strong intellect and innate curiosity for nature in general that drives good science. They are the ones that can really end up pushing things forward. They are our future generation of scientists and it is a pleasure to mentor them.”

Their work is leading to results that could have profound implications for women of all ages.

“This paper is showing that even after a hormone is no longer on board, months and months later, after the reproductive cycle has gone through many phases, there are still changes occurring that are clearly impacting the brain and its function,” says Bimonte-Nelson.

This research was funded by grants from the National Institute on Aging, the state of Arizona, Arizona Department of Health Services and the Arizona Alzheimer’s Disease Core Center. The birth control study was published online ahead of print here: http://www.springerlink.com/content/53357212117581w6/

ASU, which has seen 83 percent enrollment growth in undergraduates from California since 2006, is about to unleash a full-court press on southern California.

Competition between Arizona and California is moving from the playing field to the classroom. With tuition and fees at California’s public universities heading steadily upward and enrollment caps locking out many academically qualified students, the Valley of the Sun is looking like a great place to call home. But it isn’t just cost that’s a driving factor. California students cite the strength of ASU’s faculty and academic programs, undergraduate research opportunities and connection to industry.

Arizona State University, which has seen 83 percent enrollment growth in undergraduates from California since 2006, is about to unleash a full-court press on southern California. The university will be traveling west Nov. 1-6 for “ASU in SoCal,” a major recruiting effort with stops in San Fernando, Orange County, North San Diego County and Los Angeles.

The week concludes with the ASU vs. UCLA football game Nov. 5 and the final event, Sun Devil SunDay, on Nov. 6

Sun Devil SunDay is free and open to the public. It takes place from 1 p.m. to 4 p.m., at the Hyatt Regency, 11999 Harbor Blvd in Orange County, Calif.

Prospective students and their families are invited to come out for a day of fun and excitement with Sparky, the Sun Devil mascot, and the ASU Spirit Squad, and get the information they need to make the right decision about their academic future.

Students can explore college options and see for themselves all that ASU has to offer: excellent academics, and quality student life generated by 800+ student clubs, Pac-12 athletics and more.

“ASU has always been an attractive option for students living in other states because of the quality of education and affordable tuition,” said David Burge, executive director of undergraduate admissions. “With good scholarships specifically for California students, it is no surprise that more and more students are choosing Arizona State University for their undergraduate degree."

According to Burge, this event is the latest in a series of recruitment activities that ASU has undertaken in southern California. The university also has three full-time recruiters positioned in southern California, has an extremely active and visible alumni base, and regularly has ASU faculty and staff operating in the area.

Sun Devil SunDay provides an opportunity for students to engage in interactive exhibits and information-packed panel discussions and presentations to help them explore the student experience at ASU; connect with representatives of all of ASU's colleges, Intercollegiate Athletics, ASU alums and many student services offices including Admissions, Financial Aid, Housing, Study Abroad, Student Organization Resource Center (SORC) and more.

Panels and presentations include:

From 1 p.m. to 4 p.m., the ASU Parents Association also will meet with prospective parents and ASU students will supervise a kids zone for children 12 and younger.