At Saturday’s Pat’s Run in Tempe, people from all walks of life will come together to honor and celebrate Pat Tillman’s legacy. But each brings his or her own motivation to the event.

For Tillman Scholar Chad Waltz, the 4.2-mile run is a place where he gets to be with 30,000 of his closest friends, family and Sun Devil fans alike. 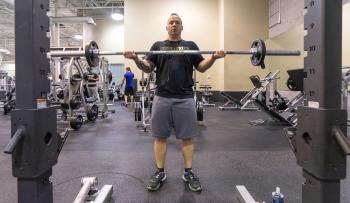 “Really I run for a combination of things, but what really motivates me to run is for our brothers and sisters who aren’t here with us that can’t run,” Waltz said, pointing both to those who, like Tillman, gave their lives in service to their country and to those who are still serving abroad.

“I run for them – those that haven’t made it back yet and those that never will come back.”

The 4.2-mile run, which ends on the 42-yard line at Sun Devil Stadium (in honor of Tillman’s No. 42 ASU football jersey), raises money for the Tillman Military Scholars, a program designed to support educational opportunities for service members and military families.

Since being named a Tillman Scholar in the 2012-2013 school year, Waltz graduated from ASU with his master’s degree in social work in the College of Public Programs. He completed his thesis while deployed to Afghanistan in 2013.

“I’m very, very blessed and thankful for the ASU graduate staff because my teachers and professors really worked with me so that I could at least finish my thesis and submit all my degree requirements and graduate,” Waltz said.

After returning from Afghanistan in November 2013, Waltz found work at the VA as a social worker in the emergency room. There, Waltz said he got to see trauma in its raw form. He said it gave him experience in understanding mental health and mental illness and in getting people placed with the correct resource.

Last month, Waltz got a psychotherapy position at the West Valley Vet Center in Peoria, Arizona. At the center, they specialize in dealing with combat veterans and with those who experienced sexual assault, both situations fairly common in the military, according to Waltz.

With Saturday’s Pat’s Run, Waltz said it will be nice to see how the other Tillman Scholars are doing. For many, their military experience shapes their professional choices.

“For me to give back, it was working for veterans, and for so many other scholars … (they) want to be doctors, but it’s to help veterans or help veteran families so it’s a lot of community outreach,” he said.

Trish Thiele-Keating, an ASU alumnus and also a partner with the Pat Tillman Foundation through her work at the ASU Alumni Association, has participated in Pat’s Run since the first run 11 years ago.

Coming from an ASU family, Thiele-Keating grew up going to ASU football games. She remembers Tillman during his time at the university and later with the Arizona Cardinals.

Thiele-Keating, her husband and their two daughters will be participating in the run – it has been a tradition since Thiele-Keating and her then-fiance heard about it 11 years ago.

“It’s a given every year,” Thiele-Keating said. “Come April, we know that’s what we’re doing and we plan everything else around it. … It’s amazing how much it’s grown since that first year.”

Thiele-Keating and her husband walk the run, but she said being able to enjoy the run for a longer period of time is great. They get inspired by people running in full combat gear or by those who clearly have a physical challenge and are challenging themselves to finish.

“I think that this cause has touched people’s hearts to know that this event is not only there in the memory of Pat Tillman, but you are also supporting those men and women who have made a sacrifice for their country, and their families,” Thiele-Keating said.

For Efraim Ruthenberg, Saturday marks the second time he has done Pat’s Run since being named a Tillman Military Scholar for the 2013-2014 school year.

Since receiving that honor, Ruthenberg graduated from ASU with his MBA through the W. P. Carey School of Business. He now works for an asset manager in financial investment and lives in Scottsdale.

“I’m pretty involved with the Tillman Foundation because a lot of their scholars are around the country (and) I’m one of the few that live in the Phoenix area,” Ruthenberg said. “… I’m always eager to help out when I can.”

He said Pat’s Run is the biggest run he has ever done. He enjoys seeing the crowd, being in a lively atmosphere and of course getting to run out onto the field at Sun Devil Stadium.

Ruthenberg applied to be a Tillman Scholar because of the program’s prestige.

“I definitely don’t really think I’m that special compared to a lot of the resumes to the other scholars, but just to be named in that group was a big honor …” he said. “Just the opportunities that being a part of the program gives you. Certain network opportunities, meeting people, other veterans, people in business, being able to participate in some of the service and volunteer programs they have is a good time.”

What do the changes at the ASU library mean in students' day-to-day lives? What do they mean for faculty? Jim O'Donnell explains the answers to those questions, along with what will happen to all of those precious books.

Jim O’Donnell is leading ASU’s libraries into a transformative time. He has been called upon by ASU President Michael Crow to advance the university’s complementary goals of learning and discovery by creating a new library for the New American University.

The prestigious scholar and author spoke to ASU News to discuss exactly what the New American University library will look like, the new role of the librarian and what will happen to all of those precious books. 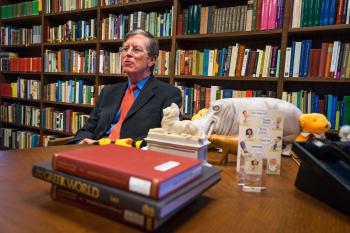 Q: What are the biggest challenges and obstacles a university library faces today?

A: That we work wonders and get taken for granted. We curate the print and digital collections and then hear people say, “Isn’t everything on the Internet now?” It isn’t – we still have the good stuff. Lastly, what we do is much more valuable than ever, but resources are inevitably limited.

Q: What will the New American University library look like?

A: It will assume that all of our users start as online users. That is, they will begin and do much of their library work remotely and we will focus our services on making sure that they – emphatically – get the best service we can deliver.

Q: What will these changes mean in students’ day-to-day lives, and how will it change how they study and do research?

A: They will be incredibly empowered by access to sophisticated, high-quality resources and by our helping them learn to use those resources with the most advanced tools. The focus for all will be on learning and making knowledge, not just having access to packaged representations of knowledge.

Q: Are the books going to go away? What will happen to them?

A: The book is here to stay, but the way we use the book changes and is changing rapidly around us. Our students and our faculty are depending more and more on online resources. When they use the physical materials from the library, they are pre-ordering them. They’re coming in to grab-and-go. Some of that has to do with the fact that we have a tired old building that needs fixing up and could make it a nice place to work, but we’re a faster-paced society and always in a hurry to make things more efficient.

A: The forcing drive in all of this is that the building is 50 years old and needs help, so we’ve got to do something that pushes decision-making in a way that if this were a big shiny new building that opened 10 years ago, we would probably be thinking in a different way. So this pushes the thinking, even literally, how do we take books out of the building for the duration of renovation, and which ones do we bring back and for what purpose? When we get to the end state where everything is available online if you’re willing to go that way, that would change the dynamics of what you do in the building dramatically.

Q: You’ve spoken in the past about the library becoming a “showroom.” What exactly do you have in mind?

A: Showroom, showplace. There’s a joke I’ve been quoting too often about how Best Buy has become Amazon’s showroom. You go to Best Buy, you shop, you compare prices and then you go home and order from Amazon. The good thing about the library is that we are both Best Buy and Amazon. It’s a showroom, but it’s a showroom for our stuff and we’ve really still got the good stuff.

Q: It would appear that the students will make the transition to this change easily, but what about faculty and staff where technology might not be as second nature to them?

A: This is a good overall principle: Do not underestimate the faculty and staff of this university. I have gone around talking to faculty and staff and asked them how long it’s been since they’ve come in the building to find whatever it is that they need. Very consistently the answer has been “not recently.” Many of them were heavily dependent on journal publishing 20 years ago, which has essentially gone 100 percent online in those fields.

Q: What doesn’t change with the new library?

A: Our commitment to make it as easy as possible for every member of the university to get whatever information they need as easily as possible and make the best use of it they can. We will calibrate their contacts to best effect and embed them as close to their users as we can. It will be the great age of the librarian.

Q: Let’s talk timelines. When will the renovation take place, how long will it take and how much will it cost?

A: The president and provost have made clear that they want to accelerate this as quickly as possible. We had a plan three years ago that talked about tens of millions of dollars; surely that’s what it will take to make Hayden Library a showplace for this campus. I’d love to see that first sledgehammer in the next 12 to 18 months, and I’m working with the assumption that that’s possible. But we live in the real world, so we’ll see what we can do and we’ll try and do it as fast as we can.