ASU Homecoming 2014 will feature a week-long celebration, based on the theme “Written in the Sparks,” with traditional events and activities, including the Legends Luncheon, Sparky’s Big Top Carnival, Homecoming Dance, Devil’s Royale, Lantern Walk and Homecoming Comedy Show. 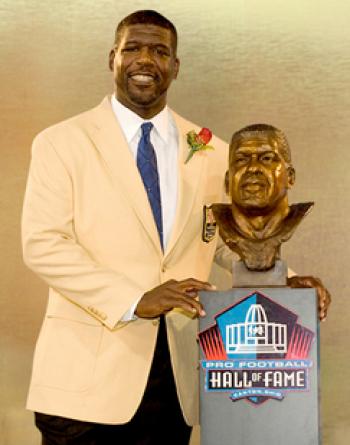 Beginning Oct. 27, the festivities will extend to all four campuses and will culminate in the annual homecoming parade and block party on the Tempe campus.

McDaniel, a two-time All-American, played on the Sun Devils victorious 1987 Rose Bowl team. During his 14-year professional football career, he played for both the Minnesota Vikings and the Tampa Bay Buccaneers. In 1999, he was inducted into ASU’s Football Hall of Fame and is a member of the university's elite Ring of Honor Society.

At the Legends Luncheon on Oct. 31, the ASU Alumni Association will welcome inductees Eric Allen and Darren Woodson into the Ring of Honor Society, which boasts 23 legendary Sun Devil Football players, who, along with McDaniels, include Pat Tillman, Frank Kush and Ron Pritchard. The luncheon will take place at 11:30 a.m. at the Phoenix Marriott Tempe at the Buttes, 2000 W. Westcourt Way, Tempe. Register here for tickets.

The annual parade and block party will begin the following day, Nov. 1, four hours prior to the Sun Devil Football game against the University of Utah Utes. The celebrations will take place from McAllister Avenue and University Drive to College Avenue. In addition to Devils on Mill, the new Devils on College pre-game event will encompass the plaza area surrounding the recently constructed College Avenue Commons building.

Keeping in line with ASU’s commitment to becoming a zero waste institution, the events will feature recycling bins to divert waste materials away from the landfill. The use of tobacco products will also be prohibited on all four campuses.

Parking lots and structures on the northern part of the Tempe campus (north of University Drive) are open five hours prior to kickoff for prepaid season ticket parking passes, and cash lots are open three hours before kickoff. Parking information can be viewed here.

More information, including a complete schedule of the 2014 Homecoming events and activities, is available at homecoming.asu.edu.

ASU student report on heroin to be simulcast on all Ariz. TV stations

In a highly unusual collaboration, every broadcast TV station and most radio outlets across Arizona will simultaneously air a 30-minute commercial-free investigative report produced by ASU student journalists on the growing perils of heroin and opioid use.

ASU student report on heroin to be simulcast on all Ariz. TV stations

In a highly unusual collaboration, every broadcast TV station and most radio outlets across Arizona will simultaneously air a 30-minute, commercial-free investigative report produced by Arizona State University student journalists on the growing perils of heroin and opioid use.

Teams of advanced journalism students at the Walter Cronkite School of Journalism and Mass Communication also will produce packages of digital stories and data analyses available on the Web, an accompanying mobile tablet app, and Spanish-language and radio versions of the documentary. 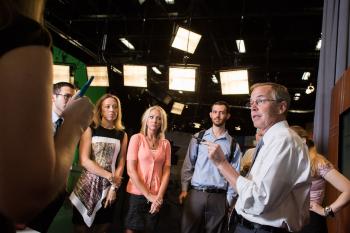 The statewide simulcast of “Hooked: Tracking Heroin’s Hold on Arizona” will air Jan. 13 on 32 TV stations in Phoenix, Tucson and Yuma and most of the state’s radio stations. The air time will be 6:30 p.m. on most stations.

Art Brooks, president and CEO of the Arizona Broadcasters Association, developed the idea after learning of the seriousness of the issue and organized the backing of the state’s broadcast industry.

“The scourge of heroin and opioid addiction is killing hundreds of Arizonans, and the growing problem is reaching epidemic levels,” Brooks said. “Broadcast stations are fiercely competitive, but our industry leaders are bonding together on this public danger in order to save lives.”

During and after the telecast, the ABA will sponsor a call center for viewers seeking counseling or more information on heroin and opioid addiction. A 100-phone center with trained counselors will be set up in the studios of Arizona PBS on the sixth floor of the Cronkite Building on ASU’s Downtown Phoenix campus.

Gordon Smith, president and CEO of the National Association of Broadcasters, lauded the Arizona initiative.

“It is nothing short of extraordinary to have every TV broadcaster in a state come together and jointly agree to air – commercial free in a widely viewed time slot – an important piece of public service journalism,” said Smith, a former U.S. senator from Oregon who leads the trade association of the nation’s TV and radio broadcasters.

“It is a testament to the greater leadership of the Arizona Broadcasters Association and the general managers across the state and their tremendous commitment to their communities,” Smith said. “I have no doubt that the Cronkite heroin project will make a real impact on this critical public health issue and save lives.”

The Arizona Broadcasters Association championed a similar project in 2008. That special report, which focused on crystal meth in Arizona, was produced by an out-of-state company. Brooks said the Arizona general managers would only agree to donate their airtime again if the new project was produced by the Cronkite School.

“The ABA and the leaders of Arizona’s broadcast stations have great confidence in the Cronkite School’s students and faculty and their ability to produce a powerful, objective and informative 30-minute TV special that we will be proud to air on all of our stations,” said Brooks, a member of the Cronkite Endowment Board of Trustees.

Cronkite is devoting eight faculty members and 70 students to the semester-long project.

“We are activating the full resources of the Cronkite School for this critically important project,” said Christopher Callahan, dean of the Cronkite School. “It is a great testament to our fantastic students and professors that the state’s broadcast industry has such faith in their work and abilities.”

The special TV report is spearheaded by a team of students led by Jacquee Petchel, a Cronkite professor and Pulitzer Prize-winning investigative reporter and editor.

Another Pulitzer winner, Knight Chair Steve Doig, is leading a team of students analyzing data on more than 10 million Arizona hospital emergency room cases, including more than 2,000 heroin overdoses, as well as census demographics to pinpoint the patterns and hot spots of heroin abuse.

The Cronkite News bureau in Phoenix, led by Steve Elliott, a Cronkite School professor and former Associated Press bureau chief in Phoenix, is producing a series of multimedia stories for the Web that will be available to all media outlets.

The New Media Innovation and Entrepreneurship Lab, directed by Retha Hill, former vice president of Black Entertainment Television and a digital media pioneer, is creating a tablet app on the history of heroin.

Associate professor Fran Matera and students in the Cronkite Public Relations Lab are producing a strategic communications plan for the TV special. The Arizona Newspapers Association is encouraging newspapers across the state to run promotional ads for the special report.

The TV stations committed to the simulcast include: