Nathan Fillion may very well be the friendliest, most unpretentious spaceship captain, mystery-solving author and science fiction heartthrob in the known universe. The “ruggedly handsome” star of TV’s “Castle” was the delight of fans as he headlined a fundraiser on the Arizona State University campus in Tempe, June 7.

The “Serenity, Softwire, and the Science of Science Fiction” event, benefiting the ASU Department of English and advertised as an “intimate evening for a small group of 50 people,” included considerable face-time with Fillion, who in-person proved surprisingly similar to the witty, charming and compassionate characters he plays on television and in film. 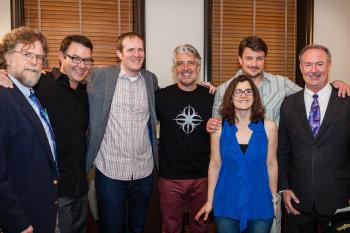 Starring with Fillion in the ASU evening’s festivities were science fiction author PJ Haarsma (a close friend of Fillion’s) along with ASU professors Ed Finn, director of the Center for Science and the Imagination; Peter Goggin, a literacy expert in the Department of English and senior scholar with the Global Institute of Sustainability; and School of Earth and Space Exploration faculty Jim Bell, an astronomer, and Sara Imari Walker, an astrobiologist. In addition to the Department of English, sponsors included ASU’s College of Liberal Arts and Sciences and Center for Science and the Imagination.

The event began with each panelist explaining how he or she arrived at his or her respective careers, and whether science or science fiction played a role in that journey. All panelists pointed to reading and imagining as formational to their senses of themselves and their places in life.

A number of big questions were posed to the panelists: “What is the likelihood of life on other planets?” and “What is the physical practicality of traveling to other planets?” ASU scientists Bell and Walker deftly fielded these complex planetary inquiries, while Goggin and Finn explained how the intersection of science and humanities – embodied in science fiction books and film – encouraged children and scholars alike to think creatively about the future. Attendees reported that they found the conversation “intellectually stimulating and thought-provoking as well as fun and entertaining.”

During the ensuing discussion, Haarsma and Fillion bantered back and forth comically, as we are told they often do in real life, at one point raising the group’s awareness of the mission they have shared for many years: promoting reading in the lives of young people. The two founded the Kids Need to Read Foundation, which provides books to underserved schools and libraries. Fillion, the son of retired English teachers, attended Concordia University of Alberta, where he was a member of the Kappa Alpha Society, an organization that emphasizes literature and debate. His brother, Jeff, is a highly respected school principal. Fillion’s story about the importance of books and reading in his childhood home was a rare moment of seriousness for the actor.

The most delightful aspect of the evening, according to guests, was the good nature of Fillion himself, who arrived with Haarsma earlier than expected and stayed later than scheduled. Fillion spent several minutes with each individual or group of friends, laughing with them, using their phone cameras to snap group “selfies” and showing a genuine interest in getting to know them.

Audience members each received copies of science fiction books: Haarsma’s teen novel, “Softwire: Virus on Orbis I,” and the Tomorrow Project science fiction anthology “Cautions, Dreams & Curiosities,” which was co-produced by the Center for Science and the Imagination with Intel and the Society for Science & the Public. Guests presented their new books and assorted other items to Fillion and Haarsma for autographing and a bit more conversation before the evening came to a close. It was then time for Fillion to head back downtown to his hotel, but not before one cadre of friends “asked him to take one last group shot of us at the end of the night, to which he replied with a smile, ‘I thought you'd never ask.’”

Herberger Institute for Design and the Arts Space exploration

Peter Held, curator of ceramics for the ASU Art Museum’s Ceramics Research Center, will retire from his position at the end of the month.

Peter Held, curator of ceramics for the ASU Art Museum’s Ceramics Research Center, will retire from his position at the end of the month. During his 11-year tenure with the museum, Held shaped the future of the internationally-renowned center and its collection.

Held’s impressive career includes the curation of over 100 exhibitions, including seven national traveling ceramics shows. He is the author of numerous articles on contemporary art and crafts, and is the editor and essayist of 10 books. 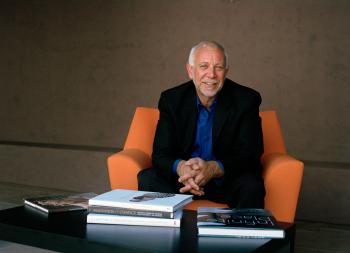 “My tenure at Arizona State University these last 11 years has been truly astonishing," Held said. "Working with engaged colleagues and faculty members, energized students, talented artists, writers and researchers, and generous collectors and patrons has given me a solid platform to carry out my work. Every day there was something new to learn, and that never diminished for me over the years.

"The success I have achieved is due, in large part, to a passionate community of supporters who believed, as I do, in the possibility that art can transform and enrich our lives.”

“In 11 short years, Peter has transformed an excellent yet modest collection of American ceramics into the best assembly of post-war American ceramics in the world; and he did so by growing and activating that archive – integrating the collection into the ethos and mission of the university by converting a collection into a world-class and highly active research center,” said Gordon Knox, ASU Art Museum director. “On behalf of the museum, the university and the ceramics field in general, we are deeply grateful for Peter's tireless effort, compassionate support of the field, and solid contributions to research and to the advancement of the ceramic arts.”

Held joined the museum in 2003 following a distinguished career as both an artist and museum administrator. He received his bachelor’s degree in studio art from the State University of New York at Brockport. Upon graduation, he moved to Helena, Montana, to become a resident artist at the Archie Bray Foundation for the Ceramic Arts (1974-1976). He later completed a master’s degree in museum administration at Oregon State University and interned at the Portland Art Museum in the Asian Art Department. He returned to Helena in 1994 to serve as executive director and curator of the Holter Museum of Art, where he successfully led a $2.3 million capital and endowment campaign.

Under Held’s leadership, the museum’s ceramics collection increased by over 25 percent, adding more than 1,000 objects to its existing holdings. Despite limited acquisition funds, Held diversified the collection greatly, transforming it from being largely vessel-oriented to a broader picture of the full spectrum of the work being done in the contemporary ceramics field. Held took great care to develop relationships with collectors both locally and nationally, and presented numerous exhibitions of new acquisitions to the collection – notably, "Shared Passion: Sara and David Lieberman Collection of Contemporary Ceramics and Craft" (2003), "British Ceramic Masterworks: Highlights from the Anne and Sam Davis Collection" (2004) and "A Ceramic Legacy: Selections from the Stéphane Janssen and R. Michael Johns Collection" (2006).

In 2013, Held worked alongside the ASU Art Museum’s Heather Sealy Lineberry, associate director and senior curator, and Windgate Curatorial Fellow Elizabeth Kozlowski for the landmark exhibition "Crafting a Continuum: Rethinking Contemporary Craft." The exhibition and its accompanying catalog, lauded by the American Craft Council as one of the most monumental of the year, provided an international perspective on modern and contemporary crafts and the current level of innovation and experimentation in material studies.

In addition to his curatorial projects, Held counts his experiences with numerous university faculty, students and interns as some of the most rewarding aspects of his time at ASU. In March 2014, he was awarded two of the highest accolades possible within the field of ceramic education: the Smithsonian’s James Renwick Alliance Distinguished Educator Award and the National Council for Education on the Ceramic Arts Honorary Member Award. The ASU Art Museum Ceramics Research Center and Peter Held received the 2007 CLAY Award (Ceramic Lifetime Achievement Award) from the Friends of Contemporary Ceramics, the leading organization of ceramic collectors, art dealers and curators in the United States. The award is given for lifetime achievement in advancing the field.

Following his retirement, Held plans to pursue independent curatorial and research projects. He will continue to remain close to ASU. His final exhibition for the museum prior to his retirement, "These Are Some of My Favorite Things," will open July 19 at the ASU Art Museum Brickyard Gallery and Ceramics Research Center.