Arizona State University students who are members of the historic first class in the American Indian Studies master’s cohort represent tribes from across Arizona and the nation. As their first year in the new program progresses, they’re learning from distinguished faculty, each other and their own research into American Indian issues and history.

Here’s a snapshot of each member of the cohort, their impressions of the program thus far and future goals. 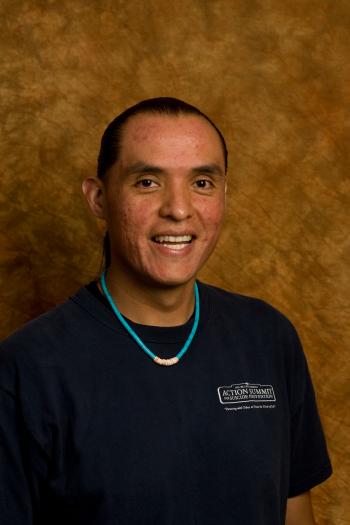 Eric Hardy (Navajo) is focusing on visual and oral culture as he earns his masters degree. As an undergraduate at ASU majoring in American Indian Studies, he focused on language immersion and ways to save languages such as his native Navajo that he is in the process of learning. Eventually, he’d like to teach indigenous languages to others, perhaps in an effort to reverse effects of historical trauma.

Working within the first class of American Indian students from diverse backgrounds and tribes gives him a chance to learn from others and delve more deeply into issues that affect American Indians such as losing languages, culture and dealing with social ills.

“We’re going deeper into the issues and exploring ways to reverse those social issues from our own indigenous knowledge,” he said. “As diverse as we are, we all have a common understanding that we are here to help our communities to change. Whether it is through economic development or cultural revitalization, what is drawing us together is knowing there is a need.”

Justin Hongeva (Hopi) is focusing on cultural resource revitalization and sustainability in his master’s program because he feels that language and culture serve as the base for American Indian communities.

“That should be the first thing on the list as far as rebuilding and sustainably,” he said.

Hongeva plans to help develop his own community of Moencopi after he earns his degree. For now, he’s part of a cohort that is learning more each day and developing strong ideas and writing skills while learning from each other.

Cliff E. Kaye (Hopi) is focusing on tribal leadership and governance in his academic concentration. His academic goals include educating American Indian communities about non-profit opportunities that they can utilize in areas such as indigenous language revitalization.

“Learning your tribal language is a lifelong process,” he said.

He’s enjoying working with the other members of the first class and experiencing the camaraderie of the cohort that is made up of American Indians from very different backgrounds.

“What’s exhilarating is to see how seriously the cohort is taking it,” Kaye said.

Laura Medina (Ojibwe) chose to join the master’s cohort in American Indian Studies at ASU because it offers a wide range of diversity.

“The faculty is amazing,” she said. “Our cohort is developing a really good relationship and I love every one of the books I’ve been reading so far.”

Tribal leadership and governance is her choice of concentration since she sees opportunities for improvement in this area, especially if governance is approached from an American Indian perspective.

Medina plans to write her thesis about reclaiming Yavapai knowledge on the Fort McDowell Reservation.  “The older people are not connected to the younger people. I want to be that bridge. I want to do research and get the community involved,” she said.

Learning the Yavapai language is also part of the plan as she conducts research that involves the community. Eventually, she would like to travel to many reservations throughout the country to serve as an advocate for regaining culture and language.

Waquin Preston (Navajo) learned about the master’s program from a professor who told him he would be a good candidate for it after earning his undergraduate degree at ASU in American Indian Studies. He choose social justice as his concentration within the program since it fell in line with how he views the world and the changes he’d like to see in American Indian education.

“I really found my purpose in American Indian Studies and I really like the faculty,” he said.

Preston plans a career in education teaching on the Navajo Reservation and his thesis topic will explore American Indian education and how it has been shaped by the colonization of Native peoples to focus on individual desires such as wealth accumulation instead of looking at the community as a whole.

If his focus could be boiled down to one point it would be empowering Indian students and facilitating nation building rather than focusing on assimilation and bringing American Indians into the mainstream.

Naomi Tom (Tohono O’odham and Kaibab-Paiute) is concentrating on indigenous rights and social justice as she earns her master’s degree. Eventually, she is planning on a career in museum studies or American Indian law.

“Being a lawyer is something I have wanted to do since I was 5,” she said.

Tom worked at the Heard Museum during an internship and she is graduate assistant to John Tippeconnic, director of the American Indian Studies Department at ASU. Her Research interests include oral histories, urban Indian identity, federal Indian policy and law and Indian gaming. She also completed an internship with Desert Diamond Casino on the Tohono O’odham Nation.

Tom is enjoying studying with a small cohort that is coming together as a cohesive group.

“It’s been really helpful,” Tom said. “There’s always someone who can relate to you.”

Lorena Yaiva (Havasupai and Hopi) was encouraged by her professors at ASU to continue her studies in American Indian Studies after she earned her undergraduate degree.

For her final master’s program topic, she is exploring ideas such as writing a thesis on language revitalization, sacred sites and land issues.

“My goal is to go back to my community and do some more research that will benefit the tribe as a whole,” she said.

Working with other students and listening to their experiences in class has given her a better idea of what other tribes are experiencing.

“It gives you a better perspective, especially of what other tribes are doing and how you can use that in your own community,” she said.

Beginning in January, ASU will offer selected high-demand undergraduate and graduate courses in Criminology and Criminal Justice and Nonprofit Leadership in the Tucson area.

Beginning in January, Arizona State University will offer selected high-demand undergraduate and graduate courses in Criminology and Criminal Justice and Nonprofit Leadership in the Tucson area.

The expanded course offerings were formally announced Dec. 6 in Greater Tucson during a gathering of alumni, current and future students, parents and university supporters. The event, “An Evening with ASU,” featured remarks from ASU President Michael M. Crow and Jonathan Koppell, dean of ASU’s College of Public Programs. Christine K. Wilkinson, president of the ASU Alumni Association and senior vice president and secretary of the university, serves as mistress of ceremonies for the event, which took place at the Hilton El Conquistador in Oro Valley.

The School of Criminology and Criminal Justice, within ASU’s College of Public Programs, will offer two courses in Tucson during the spring 2013 term. One course, CRJ 461, focuses on domestic violence. The other, CRJ 462, examines the behavior and impact of gangs. It’s the first time the school has offered classes outside the Phoenix area.

America's nonprofit organizations are being called upon as never before to deliver essential human services which enhance the quality of life in communities. Yet these vitally important organizations are only as effective as the individuals who serve in their leadership and management roles.

As a nationally-recognized leader in nonprofit education, research and technical assistance for those who lead, manage and support nonprofits, the ASU Lodestar Center provides programs that advance knowledge in nonprofit leadership and management, social enterprise and philanthropy.

“We are already deeply embedded in Tucson with our Nonprofit Management Institute and its largely Tucson-based instructional group, along with our ongoing professional development education trainings, technical assistance, convening and research activities,” said Robert Ashcraft, executive director of the Lodestar Center and associate professor within ASU’s School of Community Resources and Development.

“The future for our communities are bright as graduates of our programs span the nonprofit, public and business sectors to improve the quality of life for all citizens,” Ashcraft said. “We are delighted to offer our first two graduate-level courses in nonprofit leadership and management, as part of our Master of Nonprofit Studies program, to a wider audience in the Tucson area.”

The nonprofit leadership courses will be offered from 6-8:15 p.m., Mondays and Wednesdays, on the Pima County Community College campus, 2202 W. Anklam, Tucson.

Scott Decker, director of ASU’s School of Criminology and Criminal Justice, said a bachelor’s degree is increasingly becoming a prerequisite for entrance and advancement in policing, corrections, law, social work and other justice and social service fields.

"Offering classes leading to the BS in Criminology and Criminal Justice expands the educational opportunities for residents of Tucson, Pinal County and southeastern Arizona in important ways,” Decker said.

“With thousands of criminal justice professionals in the region, this degree will enhance the chances of obtaining a job, being promoted and expanding the job prospects for hundreds of Arizonans. The School of Criminology and Criminal Justice looks forward to bringing its high quality curriculum and instructors to the Tucson area."

The school’s domestic violence course, CRJ 461, offers an opportunity to learn about the various facets
of domestic abuse, including its cause, impact on victims, and solutions. The program expansion to the
Tucson area comes as the state of Arizona is experiencing an increase in deaths caused by domestic violence and an increase in the number of children placed in the foster care system due to abuse.

“Students who understand the nature of the problem, its causes and the responses to this crime will be better prepared to increase public safety and reduce victimization," Decker said.

CRJ 462 examines the dynamics of street and prison gangs, gang violence, the prosecution of gang members and alternatives to combat gangs.

“For those in the criminal justice system, understanding gangs and the dynamics of gangs is critically important,” said Richard Harper, a retired Tucson police lieutenant with more than 30 years in law enforcement.