Urban dancers, DJs, graffiti artists and other metropolitan Phoenix and Arizona State University urban performers will stage dance battles, art demonstrations and spoken word/poetry readings at the Urban Sol celebration from 6-10 p.m., Nov. 9, at Civic Space Park, 424 N. Central Ave. in downtown Phoenix. Urban Sol is a collaboration between the ASU School of Dance, School of Music and School of Theatre and Film in the Herberger Institute for Design and the Arts and the local community that supports the urban arts movement.

The evening festival is free, open to the public and family friendly, according to Richard Mook, assistant professor of music history in the ASU School of Music and founding member of Urban Sol. 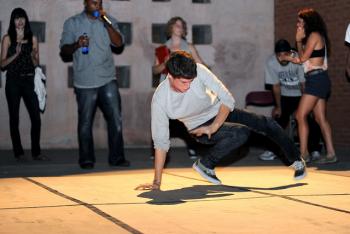 Mook describes Urban Sol as “a rich, uncharted collaboration among scholars, performers and urban artists where the classrooms are the streets, walls and public spaces of campus and city and where discovery happens in the scratch clinics, graffiti art lessons and dance battles of Urban Sol happenings.”

The theme for this event, seventh in the series, is "Planting the Seed." “It’s the notion that what one does in one moment might produce an effect you never could imagine,’’ Mook said. “Part of the nature of urban culture is that just by being there you add energy to the space.’’

The high energy, outdoor festival of hip-hop features dance battles that begin at 6 p.m. The one-on-one break dancing girl versus boy battle includes a $200 cash prize and the two-on-two open style battle includes a $300 cash prize. Winners of the open styles battle also are given free entry to the Furious Styles Anniversary on Nov. 10, and automatic slots into the top eight brackets of that dance competition. Saturday’s event is at Cyphers, the Center for Urban Arts at 9210 N. 29th Ave. in Phoenix.

Chris Couplin, dancer and middle school teacher, and Sarah “Saza” Dommick, a graduate student in the ASU School of Dance and a choreographer, dancer and the artistic director of EPIK Dance Company in Phoenix, are co-hosts for this Urban Sol event.

DJs Intel, Pete Salaz and Panic will provide scratch clinics and there will be Socially Engaged artwork by ASU Herberger Institute students.

Student journalists from ASU's Walter Cronkite School of Journalism and Mass Communication provided multimedia coverage of the 2012 elections on Nov. 6 for audiences across Arizona.

Cronkite students reported on local and state elections and the presidential election for a variety of news outlets, including Cronkite News Service, the school’s multimedia news service for professional news outlets around the region, and Cronkite NewsWatch, a live, 30-minute, student-produced newscast airing on PBS four nights a week. 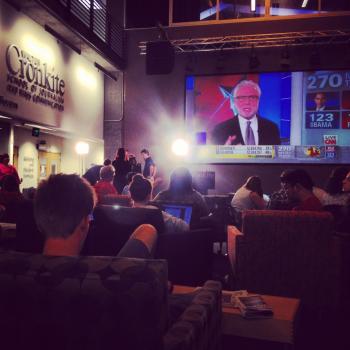 Steve Elliott, digital director of Cronkite News Service, said he was “immensely pleased” with what the students accomplished.

“I’d put (the Cronkite News Service coverage) up against any professional newsroom’s in Arizona,” Elliott said.

As Cronkite students reported on the elections, students from across ASU's Downtown Phoenix campus gathered in the Cronkite School's First Amendment Forum to watch the returns on the school's big-screen TV.

The visiting journalists participated in a three-day seminar about elections and the media and  heard from Cronkite faculty on topics ranging from the polling process to key issues and races in Arizona. On Election Day, they observed newsroom operations at Cronkite and accompanied students as they reported from the field.

In Washington, Leonard Downie Jr., Cronkite’s Weil Family Professor of Journalism and former executive editor of "The Washington Post", returned to the Post to help lead the publication’s election coverage. Downie ran the Post’s election night decision desk, calling the presidential and Senate elections in approximately 20 key states that decided the presidency and control of the Senate. He worked with the Post’s polling unit, political reporters and social media team as well as student volunteers, including two Cronkite students.