Gusev Crater once held a lake after all, says ASU Mars scientist

If desert mirages occur on Mars, "Lake Gusev" belongs among them. This come-and-go body of ancient water has come and gone more than once, at least in the eyes of Mars scientists.

Now, however, it's finally shifting into sharper focus, thanks to a new analysis of old data by a team led by Steve Ruff, associate research professor at Arizona State University's Mars Space Flight Facility in the School of Earth and Space Exploration. The team's report was just published in the April 2014 issue of the journal Geology.

The story begins in early 2004, when NASA landed Spirit, one of its two Mars Exploration Rovers, inside 100-mile-wide Gusev Crater. Why Gusev? Because from orbit, Gusev, with its southern rim breached by a meandering river channel, looked as if it once held a lake – and water-deposited rocks were the rover mission's focus. Yet, when Spirit began to explore, scientists found Gusev's floor was paved not with lakebed sediments, but volcanic rocks.

Less than two miles away however, stood the Columbia Hills, 300 feet high. When Spirit drove up into them, it indeed discovered ancient rocks that had been altered by water. But to scientists' chagrin, no lake sediments were among them. Instead, scientists discovered evidence of hydrothermal activity – essentially hot springs like those in Yellowstone National Park.

But there's hope yet for Lake Gusev, thanks to a Columbia Hills rock outcrop, dubbed Comanche. This outcrop is unusually rich in magnesium-iron carbonate minerals, a discovery made in 2010 that Ruff played a major role in. While Comanche's carbonate minerals were originally attributed to hydrothermal activity, the team's new analysis points to a different origin.

Says Ruff, "We looked more closely at the composition and geologic setting of Comanche and nearby outcrops. There's good evidence that low temperature surface waters introduced the carbonates into Comanche rather than hot water rising from deep down."

Comanche started out as a volcanic ash deposit known as tephra that originally covered the Columbia Hills and adjacent plains. This material, Ruff explains, came from explosive eruptions somewhere within or around Gusev.

Then floodwaters entered the crater through the huge valley that breaches Gusev's southern rim. These floods appear to have ponded long enough to alter the tephra, producing briny solutions. When the brines evaporated, they left behind residues of carbonate minerals. As the lake filled and dried, perhaps many times in succession, it loaded Comanche and its neighbor rocks with carbonates.

"The lake didn't have to be big," Ruff explains. "The Columbia Hills stand 300 feet high, but they're in the lowest part of Gusev. So a deep, crater-spanning lake wasn't needed."

Today, the Columbia Hills rise as an island of older terrain surrounded by younger lava flows, Ruff says. "Comanche and a neighbor outcrop called Algonquin are remnants of the older and much more widespread tephra deposit. The wind has eroded most of that deposit, also carrying away much of the evidence for an ancient lake."

Mars rover Spirit fell silent on a winter night in March 2010, and it has never been heard from since. Spirit left most of the Columbia Hills and other Gusev targets unexplored. Ruff says that as NASA evaluates landing sites for its new sample-collecting rover in 2020, Gusev Crater deserves serious consideration.

"Going back to Gusev would give us an opportunity for a second field season there, which any terrestrial geologist would understand," argues Ruff. "After the first field season with Spirit, we now have a bunch more questions and new hypotheses that can be addressed by going back."

Because the Mars 2020 rover mission will collect and cache samples for potential return to Earth, that makes going to an already visited site more important, says Ruff.

"Scientifically and operationally it makes sense to go to a place which we know has geologically diverse – and astrobiologically interesting – materials to sample," Ruff argues.

"And we know exactly where to find them."

The solar-powered house built by ASU architecture, design and engineering students for the international Solar Decathlon competition is now on public exhibit in Phoenix.

Arizona State University and University of New Mexico students joined forces to form one of 19 teams of college students from throughout the world selected to compete in the 2013 Solar Decathlon. 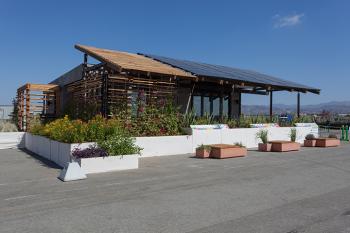 The competition sponsored by the U.S. Department of Energy challenged teams to design and build innovative, affordable, sturdily crafted and comfortable solar-powered houses that produce as much energy as they consume and incorporate other sustainable-living features.

Twenty-three current and former ASU students – from The Design School in the ASU Herberger Institute for Design and the Arts, the Ira A. Fulton Schools of Engineering and the School of Sustainability – were part of the ASUNM team. Three ASU faculty members were among the team’s faculty mentors.

The team produced a structure named SHADE (Solar Homes Adapting for Desert Equilibrium) using building materials and energy systems that are particularly effective and sustainable in a Southwestern desert environment.

SHADE won fifth place in the architecture category and sixth in the engineering category of the Solar Decathlon competition, which concluded with a more than weeklong public exhibit that attracted thousands of people to the Orange County Great Park in Irvine, Calif., in October 2013.

Michael Underhill, interim dean for the Herberger Institute for Design and the Arts, said the team produced “a sophisticated design that does not shy from the complexity of the problems of efficiency and habitability. I am very proud of the students and faculty who undertook the long and difficult task of designing and constructing an energy-efficient house for the desert.”

After the event in California, the house was transported to New Mexico, where it has since been on display at the Mesa del Sol community in Albuquerque. But it has recently been returned to Arizona, where it will be on public exhibit for the foreseeable future at the PHX Renews site at Central Avenue and Indian School Road in Phoenix. PHX Renews is an initiative by the city and the Keep Phoenix Beautiful organization to spotlight and demonstrate sustainable living practices in the urban desert Southwest.

The house was one of the focal points of activity during the Clinton Global Initiative University conference hosted by ASU March 21-23. The event led by Chelsea Clinton, vice chair of the Clinton Foundation, and former President Bill Clinton brought about 1,200 students and others from around the world to focus on action plans for progress on global social issues.

Many of the students gathered at the PHX Renews site on the final day of the conference to participate in the Clinton Foundation’s Day of Action. There, they took part in a community service project in support of the PHX Renews effort to promote sustainable land use on public spaces. The SHADE structure was used as a staging point for the Day of Action project.

Beyond a role in the Clinton Foundation event, the SHADE team wants its house to have a significant long-term impact.

“With the house coming back to Phoenix, I hope that many more ASU students and faculty will get involved in the project,” said architect Phil Horton, a faculty associate in The Design School, and one the team’s mentors.

“Even though we completed the project as a relatively small team, the house is the property of the university, and we want everyone to feel some sense of ownership and engagement with the work,” Horton added.

Horton noted that several team members who have worked on the SHADE project from the start were back on the job at the PHX Renews site, reconstructing the house before the weekend of the Clinton Global Initiative University conference.

Among them was Jared Malone, a fifth-year graduate student in architecture. Malone said that after years of hard work on the project it was easy to forget “how unique this has been for my education. But now that we have the opportunity to show a new group of students how to assemble the house, and see their excitement and eagerness to learn, it’s a great reminder of why I signed up for the Solar Decathlon.”

Kevin Christensen, who graduated from The Design School last year with a master’s degree in architecture and now works at Irwin G. Pasternack, AIA + Associates, an architectural firm in Phoenix, returned to the project for a few days “to button things up.”

“This really has been my life for the past two years,” said Christensen, who was primarily involved with the architectural and structural design of the house, and with its construction.

Team mentors Matt Fraser and Kristen Parrish, faculty members in Ira A. Fulton Schools of Engineering, said the team’s hard work and skill were reflected in its fifth-place and sixth-place rankings against experienced and formidable Solar Decathlon competitors.

Students say the lessons they learned from the Solar Decathlon experiences were worth the arduous effort.

Dealing with project organization, logistics, finances and business operations was a daunting challenge, said Gian Gonzalez, a construction management student who received the Jason McElroy Memorial Scholarship. But the reward came in “getting to see the entire design-and-build process take shape,” enabling the group of architecture, design, construction and engineering students to see things from the each others’ perspectives and learn to collaborate effectively.

Gonzalez said students learned valuable lessons about the necessity of coordinating communications, time management, meeting project deadlines and budgeting resources. “It made me step out of my comfort zone and learn more about the whole construction and design process,” said civil engineering student Vid Micevic.

John Cribbs, a recent architecture graduate of The Design School and current doctoral student in ASU’s Del E. Webb School of Construction Management, served as the team’s architectural manager and was also part of the construction group. He said that although the project also placed him “extremely far outside of my comfort zone ... It challenged me every day. As a team, we were able to execute a design from vision to reality. It was, and will remain, one of the most satisfying experiences for me.”

The competition “gave me a taste of what the industry is really like. Now I have a basis for knowing how I can improve and what things I need to become more familiar with,” said Daisy Herrera, a construction management student.

“The public absolutely loved our house and told us they could see themselves living in it. People even made offers to purchase the house,” Herrera said.

“I want everyone to know we gave it our best effort, and even though we didn’t place high in the competition, we still finished with a truly spectacular innovative design,” she said. “The whole point of this competition was to design and build a home that will help promote the integration of solar power into the residential development industry. I feel like we accomplished our goal.”

Ali Abbaszadegan, who is earning concurrent graduate degrees in architecture and landscape architecture, has been working on the SHADE project from the beginning. He said the house “is a symbol of what architecture can accomplish when you work collaboratively and aim toward solving social and economic issues through sustainable strategies.”

The public’s comments about the team’s SHADE structure during the Solar Decathlon event in California were overwhelmingly positive, said team mentors Fraser and Parrish. “Many people who toured the house said they would love to live in a home like this. They were asking if more SHADE homes were going to be produced,” Parrish said.

ASU Solar Decathlon team members are hoping the exhibition of the house near downtown Phoenix leads in that direction.

For more information about the SHADE project, visit the ASUNM team website at asunm.org

The PHX Renews site is open to the public daily from 7 a.m. to 6 p.m. For more information, visit the website phxrenews.org.