There were 11,500 resale homes recorded sold in July 2009, while there were 11,820 recorded sales in June and 8,165 sales for a year ago. Foreclosure activity in July 2009 represented 37 percent (4,200 transactions), while 7,300 traditional market transactions made up the bulk of activity. However, in the traditional market, approximately 46 percent of the recorded sales represent previously foreclosed property being sold.

Foreclosure activity, as a share of total activity, is down significantly from the 51 percent (4,295 recordings) of February 2009. Since recorded sales represent decisions made in prior months, this slowdown can primarily be attributed to the various hiatus programs that lenders instituted, while awaiting the results of the various loan modifications and re-financing programs from the federal government.  For July 2008, there were 3,470 sales in foreclosure or 42 percent on the month’s recordings. For July 2009, foreclosure activity differed throughout the Valley such as 42 percent in Goodyear, 36 percent in Mesa and 38 percent in Surprise.

Historically, July signals the ending of the resale home season that usually lasts through August.  During the resale season, sales and median prices tend to increase, so some improvement in the local housing market would not be unexpected. Although the level of activity has been at record levels, the market has been drive by foreclosure activity, including the sale of foreclosed homes, not the traditional owner-occupant segment.

“Except for the sense of failure -- foreclosures and bankruptcies -- the current market is not much different than the 2003-2006 hyper-market for it is driven by similar-minded investors looking for the deal, especially the potential of great appreciation,” said Jay Butler, director of Realty Studies in the Morrison School of Management and Agribusiness at Arizona State University Polytechnic campus.

“So, a recovery cannot really be established until foreclosure activity drops to historical levels, such as 3-5 percent of monthly recordings, and owner-occupants are the primary driving force.”
Although mortgage interest rates and prices are attractively low, tighter underwriting standards, a weak economy and poor job market (including job losses and lost income through reduce pay and furlough programs) could continue to place several obstacles before the potential of the market.

“The impact of foreclosures on the market has been the primary concern of the last year and will continue to be in the coming months, especially with the end of many hiatus programs and the weak job market,” said Butler.

The declining prices have piqued interest for potential investors and owner-occupants, especially in the lower income ranges. For the traditional market, the median price in July was $135,500 or down 33 percent from the $200,750 of a year ago. Foreclosed properties had a median price of $148,045 ($159,200 for July 2008).

Investment interest is being driven by the anticipation that home prices will rise again in the next few years. While lower prices can greatly improve affordability, they can adversely impact many owners and potential sellers whom are watching their limited equity erode, as prices decline to and even below existing debt level. Rapidly declining value can be another issue in some of the mortgage modification programs which require a limited decline in value from the purchase and financing of the home.

There are two fundamental reasons why the median price for foreclosed homes is higher than traditional transactions. The first reason is more expensive homes continue to be foreclosed, with 32 being over $1 million in July -- including six over $2 million -- and 4 percent of the foreclosures were in the $400,000 to $1 million range. Since most loan modification programs are designed for homes under $400,000, the increase in foreclosure activity for the upper-end market was expected.

The other reason is that, for the last year, approximately 50 percent of the traditional sales were foreclosed homes that were sold again with a median price markdown of 20 percent. The markdown varied throughout the Valley ranging from 51 percent in Maryvale to 30 percent in El Mirage to 13 percent in Tempe.

WhoMuriel Magenta is an intermedia professor in the ASU Herberger College School of Art.WhatMuriel Magenta is a new genre artist with a focus in video, computer art, web technology, multimedia installation and performance. She explores the relationship between various 2D and 3D electronic media in conjunction with gallery installation. On May 22, she introduces CLUB M, an exciting video environme...

Who
Muriel Magenta is an intermedia professor in the ASU Herberger College School of Art.

What
Muriel Magenta is a new genre artist with a focus in video, computer art, web technology, multimedia installation and performance. She explores the relationship between various 2D and 3D electronic media in conjunction with gallery installation. On May 22, she introduces CLUB M, an exciting video environment where art meets Salsa, animation tangos with hip-hop, and street dancing encounters Flamenco in an urban-club atmosphere. The stage environment of CLUB M is a one-time event, especially designed for the video premiere. 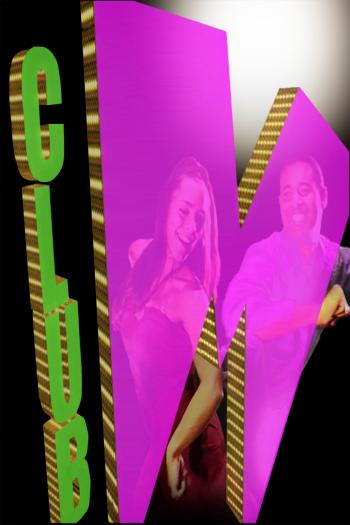 Experience the one-time stage environment of CLUB M, specially designed for its video premiere, May 22 at 8 p.m. on the ASU Tempe campus. Photo by Muriel Magenta Download Full Image

The viewer is immersed in the CLUB M ambiance upon entering the theatre. Sweeping spotlights, shifting projections and club music create the ultimate setting for viewers to imagine themselves inside CLUB M. When the screen drops and the video begins, the stage becomes a “virtual” dance floor.

“My passion for creating multimedia environments that mix 3D animation and live action video was the motivation for producing Club M,” Magenta says. “I said to myself: an urban dance club is the perfect subject for such a production -- besides, I love Latin dance and hip-hop fusion!”

The Club M video will be distributed nationally and internationally to festivals, galleries, events, media libraries and on the Internet. Magenta’s 3D animations and video works have been screened internationally and throughout the U.S. Magenta is a native of New York City. She received her art training at CUNY- Queens College, and Arizona State University, Tempe, Ariz. For more information about Magenta, visit: http://herbergercollege.asu.edu/directory/selectOne.php?ID=164&.

Where
The Paul V. Galvin playhouse is located in the Nelson Fine Arts Center on the southeast corner of Mill Avenue and 10th Street on the ASU Tempe campus.