When Murphy Bannerman answered art history professor Claudia Mesch’s ad for an internship possibility with an e-journal that focused on Surrealism, she knew next to nothing about the subject. It was through a handful of one-on-one meetings with Mesch and the studying of recommended texts and artists that Bannerman came to appreciate Surrealism in a way she says wouldn’t have been possible in the classroom alone.

After receiving funding from the Terra Foundation for American Art for the Journal of Surrealism and the Americas (JSA) conference in 2010, Mesch decided part of those funds would be best used to mentor undergraduates through the platform of the JSA e-journal, for which she serves as a managing editor. At the time, Bannerman was a sophomore, interested in graphic design, and saw the opportunity as a chance to explore something new while gaining experience and honing her skills. 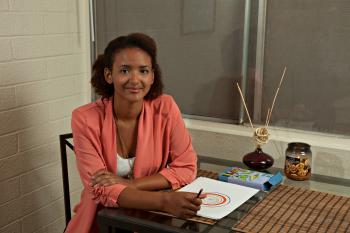 With the task of creating a new logo for the e-journal, Bannerman began by spending several weeks researching surrealist journals such as VVV and DYN, as well as DYN’s founder, surrealist artist Wolfgang Paalen. Throughout the semester, she became more comfortable with the movement, getting a feel for its aesthetics and developing a way to present it in an online, digital format.

Several hand-drawn sketches of Bannerman’s initial concept for the logo design were presented to Mesch, who would offer constructive criticism and guidance. Both agreed that the design needed to better reference historical Surrealism in the American West. Bannerman took that into consideration for her final design, which features a southwestern color scheme and depicts an eye, chosen to represent a vortex - a common theme in surrealist art.

Finally, Bannerman put her graphic design skills to work, transferring her drawings to Photoshop for the final version. Unfamiliar with graphic design herself, Mesch left that portion of the job entirely up to Bannerman, though they did discuss how to make sure the design remained true to Surrealism while still maintaining a vivid, clear and modern look online.

“I think I took one history of modern graphic design class in my life,” said Mesch. “I relied on Murphy’s skills and training. She is quite talented, and she shared with me some of her thought process in committing the design to paper.”

What resulted from their collaboration became the JSA e-journal’s official masthead. Both Bannerman and Mesch agree they benefited from working together by gaining a deeper understanding of each other’s areas of expertise. And although Bannerman has since shifted her focus to photojournalism, she emphasizes the value of a one-on-one learning experience with a professor, regardless of the subject matter: “Working directly with a professor allows students to ask more questions and go beyond the restraints of the classroom,” she says.

As for Mesch, she believes “the academic and scholarly work I do should be collaborative with students wherever possible ... We make our world – our identities, our memories, the places we inhabit – in and through art. I hope I can pass on to others the idea that if they are passionate about art, they can find their own path into it.”

To download and read the Journal of Surrealism and the Americas for free, visit jsa.asu.edu.

The journal's most recent issue looks at “Native American Surrealisms”; its next issue, Spring 2014, focuses on Latin America. The JSA journal is now included as part of the ASU Digital Repository in the Hayden Library database.

Unless you’ve taken a time machine back to the dark ages, you’re well aware that social media is everywhere.

Unless you’ve taken a time machine back to the dark ages, you’re well aware that social media is everywhere. The question many ask is whether social media has invented a digital culture or simply removed the red tape to a bevy of information.

Suzanne Scott, assistant professor of Film and Media Studies in the Department of English at Arizona State University, teaches two courses on the impact of new and digital media on the media industry and fan culture. 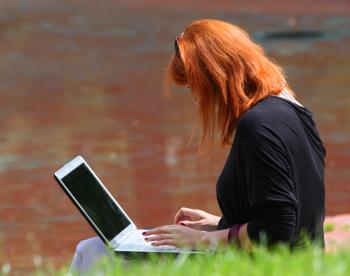 “People want to talk about social media as if it is groundbreaking, which it is on many levels, but ultimately, it is just an extension of something we’ve always been attracted to, like building out our network of friends and colleagues. Platforms like Facebook have just made it easier to curate and broadcast this information like never before,” she said.

“Twitter is oriented around making connections outside of your circles. You may have gone to Comic Con and waited in line for an hour just to ask Dan Harmon a question about 'Community.' I, on the other hand, can simply tweet him a question and he is more inclined to respond.”

Scott also references how social media is being used as an extension of the community following television shows. Shows such as "The Walking Dead" (#TheWalkingDead) and "Scandal" (#Scandal) list their tags at the bottom of the screen on each episode, encouraging the audience to go online to connect with fellow fans, producers and cast members. This increases the lifespan of a show that normally lasts only one hour each week.

But what happens when social media meets the classroom? Many professors will list electronic devices as unecessary distractions for their students during lectures. Realistically, that is probably true. Scott says that in her class, she notices students browsing the web, but that banning the devices altogether is not the solution. Instead, she sees it as a personal challenge.

“Simply telling students they can’t bring their devices to class doesn’t solve the problem. My goal is to find a way to turn this distraction into something that they critically engage with it,” she said.

For example, Scott encourages students to use YouTube and Google to find content related to the subject matter at hand that can be shared with the class. She also notices that students will search Twitter to see if there is a handle or hashtag they can follow. Students are also required to create a Storify page where they treat social media posts as scholarly evidence analyzing fan culture.

What do you think? Is social media creating an entirely digital culture? Visit the Project Humanities Facebook page now to chime in.

The Department of English is an academic unit in ASU's College of Liberal Arts and Sciences.