Arizona State University will reshape the future of doctoral students in humanities by opening doors to a wider range of careers, professional opportunities and earning potential, says George Justice, dean of Humanities in ASU’s College of Liberal Arts and Sciences.

The university was one of only three in the nation to receive support for this effort in a grant from the Modern Language Association and the Andrew W. Mellon Foundation. Connected Academics: Preparing Doctoral Students of Language and Literature for a Variety of Careers is funded through August 2019. 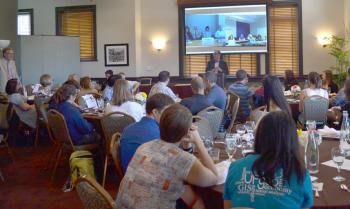 “ASU has expressed an unprecedented commitment to change in the structures and outcomes of graduate degrees in the humanities,” said Rosemary Feal, executive director of the Modern Language Association. Feal believes that ASU's efforts will serve as a model for other institutions.

“What we are doing is creating students who are going to take a very creative rather than traditional approach to their lives,” Justice said. “This training will transform the kinds of work in the world, in cultural institutions, in government and non-government organizations that PhDs in humanities can do.”

Innovations for doctoral training in languages and literature provided by the grant will include:

• entrepreneurial mentoring through a variety of resources at ASU

“We need to change our training of PhDs,” said Eric Wertheimer, a professor of English and associate vice provost in Graduate Education. “PhDs in English and languages have traditionally been trained to replicate their adviser’s careers at a research university. The truth is – and it’s one we need to respond to urgently and wisely – many of even our best students will not end up at a research university or even in academia.”

Justice believes that doctorates in the future may move back and forth between industry, non-government organizations and academia. This grant will help them prepare for all career options.

“More creative choices in their career can expand to higher earning potential,” he said. “Also, the grand challenges that confront us, whether in science, technology, sustainability or other areas, need the deep understanding of human culture and experience that we can provide.”

A brilliant technological solution to a problem is doomed to fail, Justice said, if it doesn’t function in the ways human beings can accept it and see its relevance to their lives.

Digital humanities and an understanding of methodologies can transform the way students do research and the way they present it, he added.

“If you have a humanities PhD, and you understand statistics, there are many leadership opportunities available both inside and outside the academy. We’re adding project management for the same reason. We want our humanists to be able to have the same kinds of interpersonal skills and management experience that students coming out of the lab in the sciences may have.”

The Modern Language Association/ Mellon Foundation grant will strengthen career preparation for doctorates in languages and literatures. The grant was authored at ASU by co-principal investigators Eric Wertheimer, associate vice provost of Graduate Education; George Justice, professor and dean of Humanities; and Pamela Garrett, senior manager of Graduate Programs. Other co-PIs are Mark Lussier, professor and chair of the Department of English, and Joe Cutter, professor and founding director of the School of International Letters and Cultures.

“This is an incredibly important group gathering here today working on Alzheimer’s,” said William Petuskey, associate vice president and professor in the Office of Knowledge Enterprise Development at Arizona State University. “The devastating effects of Alzheimer’s impact everyone at some point, and that’s why solutions are only going to be found through your individual and collective efforts.” More than 5 million Americans suffer from Alzheimer’s. Barring any significant treatment breakthroughs, the looming burden could be as high as 16 million by 2050 at an annual cost of $1.2 trillion that could overwhelm the U.S. health-care system. This has profound implications for Arizonans – with a population of more than 1 million people older than 65 today and an estimated 2.4 million by 2050.

Since 1998, the Arizona Alzheimer’s Consortium goal has been to make progress in the field by a strength-in-numbers approach – fostering collaborations and funding opportunities between clinical partners and Arizona’s research universities and institutes.

“Together, we have made important contributions in Alzheimer’s research, outreach and care,” said Dr. Eric M. Reiman, director of the Arizona Alzheimer's Consortium, the Banner Alzheimer’s Institute and University Professor of Neuroscience at ASU. “Thanks to so many of the people here who have made our state a destination for the fight against Alzheimer’s disease.”

At the conference, keynote speaker Dr. William Jagust, of the Lawrence Berkeley National Lab, gave a tour de force perspective from decades of research insights aimed at elucidating the underlying causes of Alzhemier’s.

“My lab works at the intersection of normal aging and Alzheimer’s disease," he said. "It’s at the borderline that things are happening and changing.”

Despite progress made identifying known genetic risk factors such as the APOE4 gene variant, brain-imaging studies that reveal telltale signs in the brains of those afflicted – including beta-amyloid plaques and tau tangles – show that the picture remains vexingly complicated.

“In normal aging, some people are amyloid negative and others amyloid positive,” Jagust said. “You couldn’t tell people apart if you talked to them, or did cognitive testing.”

(Beta-amyloid is a protein fragment that, in a healthy brain, is broken down and eliminated. With Alzheimer's disease, the fragments accumulate into insoluble plaques between nerve cells in the brain. As for tau tangles – in a healthy brain, a vital cell transport system carries nutrients and other key materials along tracks that the tau protein helps keep straight. In a brain afflicted by Alzheimer's, the tau protein is abnormal and forms a tangle, and the structures collapse, cutting off the cells' nutrients.)

Alzheimer’s is known to be present at stages even before people get sick, so to untangle Alzheimer’s progression, much more progress needs to be made in understanding the complex interplay between normal aging and Alzheimer’s to reveal its secrets, experts say.

Consortium scientists, using their strengths in brain imaging, behavioral neuroscience and clinical therapeutics, are examining the role of beta amyloid and tau in Alzheimer’s pathology, as well as the metabolic decline and brain atrophy that lead to cognitive decline and dementia.

But headlines were made recently using a new immunotherapy approach that reversed memory problems. Reiman’s team has been spearheading a clinical trial underway for a community in Colombia who are victims of an early-onset form of Alzheimer’s that begins in patients' 20s. The idea of the trial is to treat people who are carriers of the early-onset mutation with the drug crenezumab before symptoms appear, and prevent the disease.

The day’s conference talks and more than 80 research poster presentations were a premiere opportunity for clinical investigators, university researchers and a talented new generation of students to exchange information, make new connections and dream up new high-impact ideas and projects.

• The Alzheimer’s Prevention Initiative, led by Banner Alzheimer’s Institute, to evaluate the most promising treatments and clinical trials.

• Variations in hormone levels and the effects on cognitive and brain aging, led by ASU.

• The role of aerobic fitness and healthy aging led by the University of Arizona.

• The role of molecular and DNA profiling to improve the clinical diagnosis in patients with Alzheimer’s or Parkinson’s disease.

• Improving drug treatment by getting more molecules to cross the blood-brain barrier.

• Discovering and identifying other important molecules that may be implicated in Alzheimer’s pathology.

The consortium continues to make major contributions to the early detection of Alzheimer’s and the scientific understanding of the aging mind and brain. In the future, the consortium hopes to expand research and clinical initiatives to advance the fight against Alzheimer’s disease to serve the needs of Arizona patients, families and underserved communities desperate for new advances.

Through their dedicated efforts, the consortium has become a national model for statewide collaboration on Alzheimer’s research to address the urgent societal problems of the aging brain in more effective ways.

“There is recognition by national leaders in the field that there is something special going on in Arizona,” said Reiman.

For those who wish to learn more about the Arizona Alzheimer’s Consortium, a public conference will be held on June 12 at the Mesa Convention Center.