Kade Twist, a current Master of Fine Arts student in the ASU School of Art and Cristobal Martinez, an ASU doctoral student and graduate of the School of Arts, Media and Engineering, are the first Arizona State University students invited to share their work at Australia’s largest art exhibit and one that attracts the contemporary art world’s most influential curators, museum professionals, critics and academics. 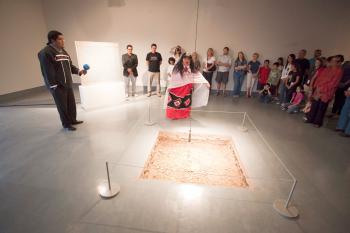 The two are part of Postcommodity, a Phoenix-based contemporary indigenous artist collective that Twist co-founded and that created “Do You Remember When?,” an installation commissioned in 2009 by the ASU Art Museum, also part of the Herberger Institute for Design and the Arts.

Gerald McMaster, co-curator for the Sydney Biennale, requested this installation from among Postcommodity’s work when he invited the group to participate. The installation required a four-foot square hole cut into the Yirbana Gallery floor in the Art Gallery of New South Wales, one of four major venues for the exhibition. The site-specific installation will also include the artists’ collaboration with New South Wales aboriginals to create a sound component.

According to Twist, the hole and exposed earth “becomes a spiritual, cultural and physical portal – a point of transformation between worlds – from which emerges an Indigenous worldview engaging a discourse on sustainability regionally, nationally and internationally.’’

Twist, a multi-disciplinary artist and member of the Cherokee nation, said he is only the fifth American Indian artist to exhibit in the history of the Sydney Biennale.

“Just to be there where only a small handful of American Indians have been, it puts us into a rarified group,’’ Twist said. “It puts us shoulder to shoulder with blue chip artists and that is absolutely fantastic.’’

“These students’ appearance at the Sydney Biennale places them in league with some of the world’s most provocative, challenging public art practitioners and underscores the Herberger Institute’s leadership in cultivating the exploration of the artist’s relationship to society and art as a way of exploring solutions and understanding,’’ said Kwang-Wu Kim, dean and director of the Herberger Institute.

Postcommodity has enjoyed much recent exposure within the contemporary art world with exhibitions at the Museum of Contemporary Native Arts in Santa Fe, N. M.; the Lawrence Arts Center in Lawrence, Kan. and the Santa Fe Art Institute in addition to exhibits in Belgium, the Czech Republic and the 2012 Adelaide International. This year, Postcommodity will be artists-in residence at the Tucson Museum of Contemporary Art.

Twist sees an invitation to exhibit in these circles as critical to adding the indigenous voice to the broader discourse he says is dominated by Western culture’s perspective.

“Postcommodity works to forge new metaphors capable of rationalizing our shared experiences within this increasingly challenging contemporary environment and to promote a constructive discourse that challenges the social political and economic processes that are destabilizing communities and geographies.’’

He credits the Herberger Institute and the professors and curators within the ASU School of Art and the ASU Art Museum with their support and initial commissioning of the installation three years ago.

“The ASU Art Museum gave me my first art exhibit,’’ Twist said.  His work is part of the museum’s permanent collection.

“Kade entered into our graduate program at ASU with a significant body of work and it has been thrilling to witness his technical, formal and conceptual growth,’’ said Adriene Jenik, professor and director of the ASU School of Art. “Having the work of Postcommodity collective included in the 18th Biennale of Sydney signals that the work is being embraced by respected leaders in the global contemporary arts field.”

An interdisciplinary team of faculty are exploring what motivates people to be generous and how religion influences their actions.

Many people have it in their hearts to be generous, but what motivates their actions?

Generosity is accepted and encouraged as a practice, but the reasons behind the behavior are not well understood. An interdisciplinary team of faculty working with Arizona State University’s Center for the Study of Religion and Conflict are exploring what motivates people to be generous and how religion influences their actions.

The study is funded through a $363,000 grant from the John Templeton Foundation/University of Notre Dame Science of Generosity Initiative. Aspects of generosity that researchers are examining through the initiative include how one person’s kindness to others affects the recipient’s kindness in the future and what the difference is between those who are giving and those who aren’t.

“Generosity is an important part of human behavior that we don’t know much about,” said Carolyn Warner, ASU School of Politics and Global Studies professor and principal investigator for the ASU project. “It wouldn’t hurt if there were more of it in the world.”

Warner and her team are identifying generosity motivators in religions through a comparative study of Muslims and Catholics. Their aim is to discover aspects of religion that motivate people to give of their time, effort and financial resources, and how those motivators might be similar or different in two of the world’s major religions.

“What we want to know is what is it in the religious experience that might prompt generosity,” she added.

ASU psychology professor Adam Cohen and Ramazan Kilinc, a political scientist at the University of Nebraska, joined Warner as co-principal investigators in the study that took them to Dublin, Milan, Paris and Istanbul.

“We traveled to these countries because of the focus on Catholicism and Islam,” Warner said.

Researchers examined factors within each religion that might motivate generosity, such as a sense of duty to one’s God, the love of Jesus or Mohammad, feelings of being blessed and the way each religion is organized. The work involved interviews, participating in religious group activities and conducting experiments.

“These kinds of studies are very important for understanding the varied role that religion plays in society,” said Linell Cady, director of the Center for the Study of Religion and Conflict. “So much attention is focused on conflict that attention is needed to understand those values and resources within religion that provide the building blocks for strong, vibrant communities.”

The study’s findings were extremely clear in some cases such as motivation to give. Muslims strongly feel that if they are blessed then they have an obligation to God to share with those less fortunate than themselves. They also feel that they are following in the footsteps of the Prophet Mohammad by being charitable to others. Catholics don’t see an obligation to God as a primary motivator to help others; instead, their love for Jesus motivates them to help others.

Commonalities were also apparent. Members of both religions were more likely to volunteer to help if the person asking for the donation was personally known to the member, such as an imam, priest or other person who is admired within the religious institution.

Another common thread exists within the positive experience of giving and actually connecting with people you are helping, such as working at a soup kitchen and sitting down to eat with someone who is down on their luck.

A third commonality was an extensive reliance on volunteers to help sustain the religious entity, such as the parish church or Islamic association. Researchers found that Catholicism is less hierarchical than commonly thought. Many religious functions are carried out by the laity, and they respond by helping. Muslims also felt a strong sense of responsibility to contribute to the daily functions of their religious associations.

“People are very giving,” Warner said. “Community is very important for Muslims and Catholics, not in terms of peer pressure to behave in certain ways, but because they like being with other people. They find it gratifying to help others and to interact with those in need.”

Another finding points to the crucial roles of religious organizations in connecting people who need help with government social-service organizations.

“They are the ones often making the connection and bringing that person to the state or city office to start getting help,” Warner said. “They fill in the cracks, along with secular volunteer groups.”

Challenges that the researchers needed to overcome during the study included gaining access to parishioners in the Catholic churches and organizing psychology experiments with Catholics and Muslims in Dublin and Istanbul, respectively.

“Catholics are more reticent to talk about money or the extent to which they are helping others. They are supposed to be modest about those things,” Warner said. “The Islamic associations we worked with were open to our study because they welcomed the opportunity to help increase the understanding of Islam.”

The experiments were conducted on site with people from the community.

“We wanted to find out how the religions affect their believers in their own settings,” Warner said.

Officials from both religions expressed interest in learning about the primary generosity motivators among their members.

“People are interested in finding out about their own religion,” Warner said. “For many of the study participants, the experience of being generous is, in and of itself, profoundly religious.”

Center for the Study of Religion and Conflict Research Employee