The future of energy

Can our energy future be reliable, affordable, and low-impact? Fossil fuels come with environmental, economic, and social pitfalls, but renewable energy sources have their downsides as well. Perhaps our future will be shaped by a combination of both.

ASU and the Arizona Science Center are hosting a public event on the future of energy, from 5-8 p.m., Jan. 24, at the Arizona Science Center IMAX Theater. During this panel discussion, American Public Media reporter Eve Troeh will moderate a former Shell Oil president, a climate scientist, and an environmental filmmaker as we all contemplate and envision sustainable energy options.

WHO:
John Hofmeister, founder, Citizens for Affordable Energy
John Hofmeister retired as president of Shell Oil Company in 2008 to found and head the nationwide nonprofit group, Citizens for Affordable Energy. As a business leader, his global corporate experience crosses a wide range of both energy-consuming and energy-producing companies, leading him to consider environmental security differently from mainstream practice. His unique both-sides background provides valuable insight to ASU‚s Global Institute of Sustainability and School of Sustainability, where he serves as a faculty member and Julie A. Wrigley Private Sector Executive-in-Residence for Sustainability. Hofmeister received his master‚s degree in political science from Kansas State University. Learn more about John Hofmeister at http://sustainability.asu.edu/people/persbio.php?pid=7696. Download a photo at http://sustainability.asu.edu/people/persbio.php?pid=7696.

Mark Jacobson, director, Atmosphere/Energy Program, Stanford University
Mark Jacobson is a professor of civil and environmental engineering at Stanford University. There, he directs the Atmosphere/Energy Program and develops computer models to better understand air pollution and climate change. His research on soot and aerosols has inspired climate policy actions and regulations. Jacobson has served on the Energy Efficiency and Renewables advisory committee for the U.S. Secretary of Energy and continues to investigate reliable, low-impact energy sources. Jacobson holds a Ph.D. in Atmospheric Sciences from the University of California - Los Angeles. Learn more about Mark Jacobson at http://engineering.stanford.edu/profile/jacobson.
Download a photo at http://engineering.stanford.edu/profile/jacobson.

Peter Byck, director, Carbon Nation
Peter Byck has more than 20 years of experience as a film director and editor. He has toured nationally with his documentary, Carbon Nation, which features people from all over the U.S.˜from a Texas wind farmer to multi-millionaire Sir Richard Branson˜sharing their climate change solutions. During the filmmaking, Byck ultimately found that liberals and conservatives support clean energy initiatives and clean energy can serve as „the great convener.‰ He has a bachelor of fine arts from the California Institute of Arts. Learn more about Peter Byck at http://www.carbonnationmovie.com/about/filmmakers. Download a photo at http://sustainability.asu.edu/events/rsvp/peter-byck.

Eve Troeh, reporter, American Public Media Marketplace
Eve Troeh started out as a staff member at Marketplace Money in 2008. In 2010, she joined Marketplace's Sustainability Desk as a radio reporter breaking stories on how sustainability issues impact business and the economy. Her first assignment was reporting the 2010 United Nations Framework Convention on Climate Change. From there on, she‚s profiled stories about free-range hog farms, international climate change negotiations, and historical energy infrastructures. Troeh holds undergraduate degrees in anthropology and journalism from the University of Southern California.

This event is part of the Case Critical Series presented by ASU's Global Institute of Sustainability. For more information call 480-965-2975. Speakers in this series discuss a range of timely environmental, social, and economic topics. Check online for future events at http://sustainability.asu.edu/events.

Northey was born in 1928 to Mary Ellen Riley Northey and William Thomas Northey in Duluth, Minn. The third child and only son, he grew up in the small farming community of Meadowlands, Minn. 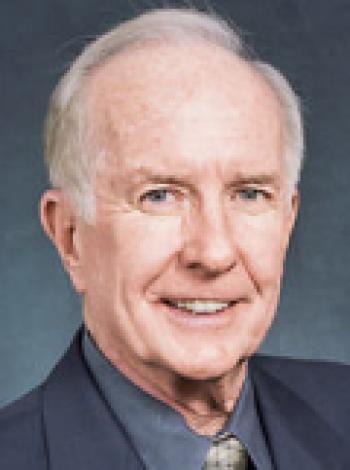 After joining the Naval Reserves, he studied at the University of Minnesota Duluth Branch and graduated with a bachelor’s degree in June 1950. This was followed by civilian employment at Great Lakes Naval Station before entering a doctoral program at the University of Kansas.

Shortly after receiving his doctorate, Northey was hired as a professor at ASU in the Microbiology and Botany Department.

Northey taught microbiology and immunology at ASU for the next 25 years. He played a crucial role in obtaining grant funding and secured the university’s first electron microscope. Northey’s notable research contributions include the development of the first diagnostic skin test for valley fever called Coccidioidin. He also created scorpion anti-venom and distributed the serum to local hospitals at no charge.

Northey went on to found Bioproducts Research Laboratories and create a new way to test for allergies, which replaced the “scratch” test and involved only a simple blood draw. During retirement, Northey continued to work in his field as a consultant.