Freshman seeks to impact the world via service

Much like every college student, Jenny Chen, a freshman at Arizona State University, has a long "to-do" list. She has to attend classes, study and – of course – change the world through service. Alright, maybe that part isn’t as typical. 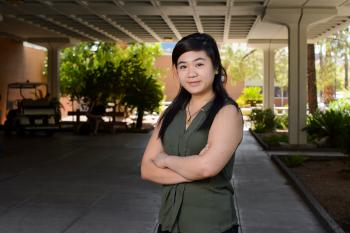 Chen, a Phoenix native, selected biomedical engineering after a family friend told her about the curriculum shift within the Ira A. Fulton Schools of Engineering to be more focused on industry preparedness upon graduation. The in-state tuition discount solidified ASU as an attractive college option.

“We learned about a device that uses neurons in the brain to facilitate artificial vision. It would be awesome to give people in need the chance to see through technology. I’m really interested in looking into similar devices that can restore natural senses,” she said.

The busy freshman is still learning to balance her schedule of 19 credit hours. She is also looking into campus clubs that fit her interests, such as Engineering Projects in Community Service (EPICS) and the Biomedical Engineering Society. She hopes that a stint with EPICS will allow her to follow her passion for volunteering and giving back to the community.

When she was in the seventh grade, Chen began volunteering in an English language learner program hosted by her church that assisted international students at ASU with the transition to America. For her, the reality of being a non-native speaker hit close to home, as her parents had moved to the United States from Taiwan and spoke little English.

“They were misunderstood everywhere they went and it became very frustrating for them. When you come to the U.S. to study, you don’t understand the basic idioms of life in America, like how to order food or how to navigate a job interview. I speak Chinese so I can act as a translator for those coming from areas of China,” she said.

The highly coveted skill has also taken her to Taiwan where she taught in a middle school for 10 weeks during the summer. She says that seeing others learn and succeed ignites her devotion for helping others.

In the future, she would like to travel to South America and revisit Europe. For now though, this Sun Devil is hard at work planning for her second semester at ASU and adjusting to the course load of university life.

It is rare when high school students know exactly what they want to be in the professional world. The difficulty for Sara Santos was not determining her goal, but deciding her journey.

It is rare when high school students know exactly what they want to be in the professional world. But this was the case for Arizona State University Doran Community Scholar Sara Santos, who decided at 16 years old that she was destined to become a labor delivery nurse after watching the birth of her niece. The difficulty for Sara was not determining her goal, but deciding her journey. 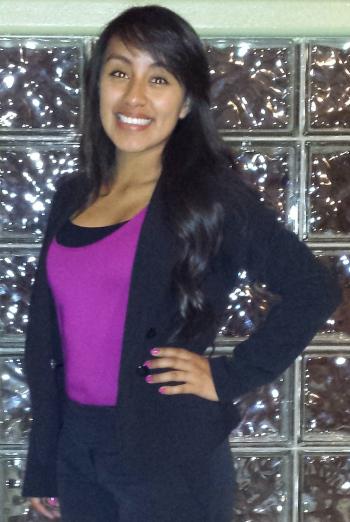 Santos grew up in a rough part of west Phoenix after her parents emigrated from Guatemala. She attended Maryvale High School, part of the Phoenix Union High School District. “The area I grew up in doesn’t have a very good reputation,” she says. “I really had to work hard to surpass what people expected out of students from that area. It was difficult to pass that barrier.”

During her senior year of high school, she discovered the Doran Community Scholars Program, a need- and merit-based program for students from the Phoenix Union High School District.

The program was formed in the late 1990s by Maureen and Wayne Doran, who wanted to aid and inspire students with financial constraints from Wayne Doran’s alma mater, Phoenix Union High School District, to attend ASU and then provide them with continual support throughout their academic career.

“It was actually by chance that I applied for the scholarship because my friend was applying for it. I went online and got everything about a week before it was due,” Santos says. “I’m so glad I saw it.”

She is now a 19-year-old sophomore at ASU, majoring in nursing and minoring in family and human development. She says having the scholarship helped her transition from high school to college and satisfied her financial needs. The required events for Doran Scholars also allowed her to quickly become involved as a freshman and develop professionally.

Santos was a member of the Sun Devil marching band and the Sun Devil basketball band, the current fundraising chair in the multicultural sorority Kappa Delta Chi and volunteers more than 30 hours a semester for numerous community services projects.

One of her favorite community service programs is the Arizona Family Health Partnership. With this program, she visits various Valley high schools during their human growth and development classes and presents about the nutritional importance of folic acid.

Santos has worked with Feed My Starving Children by making food packages for third-world countries. She has also worked with KaBOOM, a non-profit dedicated to helping children, to build a playground for children in an apartment complex and with Habitat for Humanity to build a home for a man in need.

“My main motivation to succeed is my parents,” Santos says. "They both grew up with hardly anything. They each had two outfits per week. They came to the United States to try and improve the lives of their kids. They’ve worked extremely hard and I’ve seen how hard they’ve worked. It’s all because they want to see us succeed. I work hard so all my parents’ work wasn’t in vain.”

Santos hopes to find a job at a hospital in Phoenix after graduation for a year and then apply for graduate or medical school. Thanks to the support of the Doran Community Scholars program, she appears to be well on her way.