At E2 Camp, the orientation camp for freshmen in Arizona State University’s Ira A. Fulton Schools of Engineering, students are told to immediately begin thinking of themselves as full-fledged members of the engineering community.

“Traditionally, students have had to get through two or three years of classes before engineering schools started letting them feel like they might be good enough to be let into  the club,” said Paul Johnson, dean of the Fulton Schools, to students at an E2 Camp session last summer. 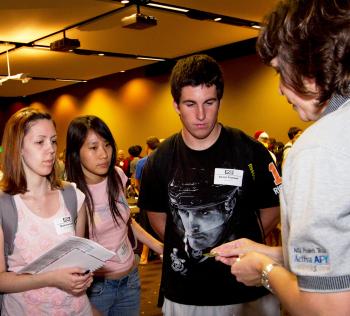 In breaking with that tradition, Johnson said: “We want you to think of yourselves as engineers from day one at ASU.”

Such an event is typically geared for juniors and seniors, “but we want to create a sense of community among our first-year students, and help them develop an identity for themselves as future engineers,” said Robin Hammond, director of the Fulton Schools’ Engineering Career Center.

Career Exploration Night is a pivotal part of the “reinvention of the first-year experience” under the direction of professor James Collofello, one of the Fulton Schools' associate deans and director of Academic and Student Affairs.

More than 1,100 freshmen attended the Sept. 8 event, where they had the opportunity to talk to almost 200 professional engineers and other representatives from more than 80 companies, government agencies and industry associations.

“These are all very busy people. So we’ve been thrilled about how many of them want to be a part of this event," said Joyce Donahue, a career advising coordinator for the Fulton Schools. "They really are interested in meeting and helping the next generation of engineers.”

And they heard all that and more directly from working engineers.

Nerheim is vice president of research and a technical fellow for Taser International, the self-defense and personal safety products and technology company. He earned a master’s degree and a doctorate degree in electrical engineering from ASU.

He told students that being capable of teaming with professionals in many other fields – both within and outside engineering – is essential in today’s fast-changing global economy.

“I tell them they have to be more than a good student getting good grades in classes,” Nerheim said. “A true engineer is a collaborator and a master at teamwork.”

“My advice is to get involved. Get involved in student engineering organizations, get internships that let you explore different aspects of the field of engineering you’re majoring in,” said Bermudez, who earned his degree in civil engineering from ASU in 2008.

He found his job through contacts he made while working with the ASU student chapter of the American Society of Civil Engineers.

“The technical education is only a foundation,” Bermudez said. “You have to learn to network, learn leadership skills. That is how you get ahead.”

Beyond career advice, engineers at the event talked to students about charting their path through their coming years at the university.

“I started in electrical engineering and then went into aerospace” before changing course again and zeroing in on earning a degree in civil engineering at ASU in 1993, recalled Jayme Chapin, who’s now a senior civil engineer for the city of Glendale.

“So I know how hard it can be at a young age to figure out what your thing is,” she said. “I think it’s really valuable for students to hear from experienced engineers about the work they do. That could be so important in helping them make good decisions about the direction they will go in.”

Dave Chapin, also a 1993 ASU civil engineering graduate, now working for Tpac, a division of Kiewit, a major building contractor, said many students need help “simply understanding what they are getting into” by majoring in engineering.

“Some know exactly what they want to do and some have only a general idea,” he said. “But they all need to know more about what they should focus on” in their studies and extracurricular pursuits to emerge as viable job candidates.

“I love this kind of event for freshman,” said Patrick O’Leske, a civil engineering major. “I found it useful for information about my future career. Most of the people I spoke to were friendly and provided as much information as they could, though it was so busy you had to wait five to ten minutes for them to be available.”

Engineering management major Justin Hennis said the event was valuable for “giving you a good heads-up about what is coming in the future” for engineering students, “and what to expect when it’s time to look for a job.”

Hennis said the event could have been managed more effectively by having industry representatives talk to groups of several students at arranged times, “rather than everyone scrambling all around. But I think this is great program and it should continue.”

Career Center director Hammond said her office already is at work on ways to enhance the experience at next year’s freshmen Career Exploration Night.

“Students are hearing first-hand from people who are doing the kinds of work they will be doing after they graduate,” she said. “This can be an extremely valuable first step in career planning.”

The Man in the Moon won't be there, but Arizona State University's "moon people" will be.

The Man in the Moon won’t be there, but Arizona State University’s “moon people” will be.

The first Astronomy Open House of the year will take place from 8 to 10 p.m., Sept. 23 (date changed from Sept. 30 due to conflict) on the roof of the Bateman Physical Sciences Center H-wing, Tempe campus. 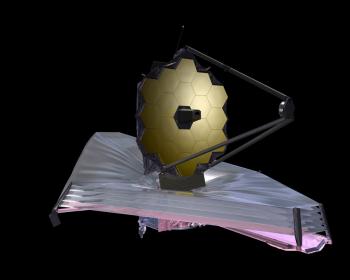 Staff from ASU’s Lunar Reconnaissance Orbiter Camera project will be on hand to show off new high-resolution images of the moon, and there will be a new radio astronomy table. Visitors also can learn about meteorites, see rocks with the GEO Club, and see the wonders of the local universe through our telescopes.

To get to the open house, go to the main entrance to the Bateman H-wing. Free parking is available after 7 p.m. in the Tyler Street Parking Garage. From the parking garage go west along the University Drive sidewalk (toward campus) until you see signs leading you to the entrance.

The event is free. For a campus map and parking information, go to http://astopenhouse.com.