Three Arizona State University engineers are undertaking research to make technological advances that would strengthen the capabilities of the nation’s military forces. 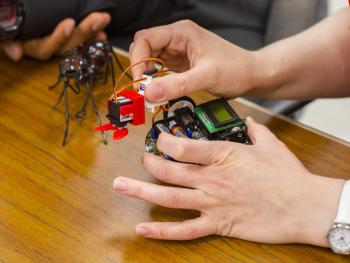 DARPA, a part of the U.S. Department of Defense, selected 33 researchers from universities across the country to receive Young Faculty Award research grants in 2014. With the awards to Artemiadis, Berman and Jiao, ASU garnered the second highest number of grants for faculty members of any of the universities. The three are assistant professors in the School for Engineering of Matter, Transport and Energy, one of ASU’s Ira A. Fulton Schools of Engineering.

The system would not only establish brain-machine communication between the controller and multiple UAVs – referred to as a “swarm” – but will allow a controller to receive information from the vehicles and use it to guide a swarm in carrying out its mission.

According to DARPA, the research in “brain-swarm perception and control interfaces” looks beyond current state-of-the-art brain interfaces that involve control of only a single machine. It will instead tackle the challenge of using brain signals to coordinate the collective behaviors of a swarm of vehicles in performing complex tasks.

He will develop systems able to control swarms of various types of unmanned vehicles. The swarms may consist of hundreds of small robots (each only two to three inches long), hovercraft with four sets of propellers, called quad copters (each about a foot long), airplanes that could be about half the size of a Boeing 707 jet airliner, or “hybrid swarms,” such as combinations of aircraft, boats and underwater vehicles.

To achieve this, he will explore the capacities of the human brain to perceive, collect and process information from artificially intelligent technology.

Using electrodes placed on the head, current technology can receive and transmit signals from more than 120 specific locations in the brain, Artemiadis said. This will enable him and his research team to study activity in areas of the brain that process visual and auditory information, control muscle movement, and enable memory, learning and computational ability.

“We want to fuse all that information into looking at how the brain reacts to all the different kinds of events a person may experience when interfacing with a swarm,” he said. “It will be important to understand how the brain and the vehicles differentiate between the signals they send and receive to each other, and how that factors into human decision-making in controlling swarms.”

The technology would allow many military operations to be performed by remote control, making it unnecessary to risk the safety of soldiers by sending them into threatening environments.

Berman is developing a system that would allow swarms of robotic machines to perform reliably in situations in which there is little prior data about the environment the swarms are operating in, and when Global Positioning Systems signals and radio communication are limited and unreliable.

The swarm-control strategies she is devising are designed to mimic nature.

“You see ant colonies and bee colonies, schools of fish and flocks of birds that have hundreds or even thousands of individuals that all act autonomously but still work toward a collective goal,” she explained. “My project is about getting robotic swarms to act like that. In a way, we are engineering robotic ants.”

That will require making small robots that can interact with each other and with their environment, with the ability to collaborate in performing tasks.

Such technology could perform security surveillance, search and rescue activities, and detection of chemical, biological and nuclear materials. Swarms could also monitor weather and climate conditions, transport materials, and collect and transmit data from underwater environs or from planets and asteroids.

“I hope to be able to design a swarm-control framework that lets you give directions to robotic swarms using normal language,” Berman said. “And that framework would also be able to generate programs that tell you what kind of robots and how many robots you need to effectively perform specific tasks in a particular environment.”

Her DARPA grant will provide $250,000 a year for two years, and possibly an equal amount for a third year of work on the project.

Jiao’s research will focus on titanium alloys, composite metals widely used in aircraft and space vehicles. He’ll work to gain deeper knowledge of the microstructures of the materials so that he can devise a “recipe” for processing and fabricating stronger alloys.

He will need to come up with a set of mathematical tools and computational formulas that enable exact quantifications of complex multi-level microstructural patterns. That quantification can yield more precise predictions about how various environmental conditions or varying degrees of applied force will affect the microstructure of the alloys, Jiao said.

Beyond the quantification goal, Jiao will look to reveal what conditions are required to produce specific microstructures with properties that will result in more resilient titanium alloys.

“The idea is to show how to set up processing and fabrication systems to make an alloy with certain characteristics and properties so that you get a better and more predictable performance from the materials,” he said.

He wants to formulate a set of instructions for software programs that provide the mathematical recipes for such custom-tailored microstructures.

His methods will likely have the potential to be applied to improving on a wide array of other composite materials for myriad uses beyond aerospace applications, he said.

Jiao’s project, and those led by Berman and Artemiadis, will give engineering graduate students opportunities to assist in the research.

The ASU Book Group will meet at noon, Jan. 28, to discuss "Wreck Me," a book of poetry by Arizona State University Department of English faculty member Sally Ball.

The ASU Book Group will meet at noon, Jan. 28, to discuss "Wreck Me," a book of poetry by Arizona State University Department of English faculty member Sally Ball.

The meeting will take place in room 316 of the Durham Language and Literature Building on the Tempe campus. The group is open to all ASU faculty, staff, students and alumni. Ball will be present to talk about her work. 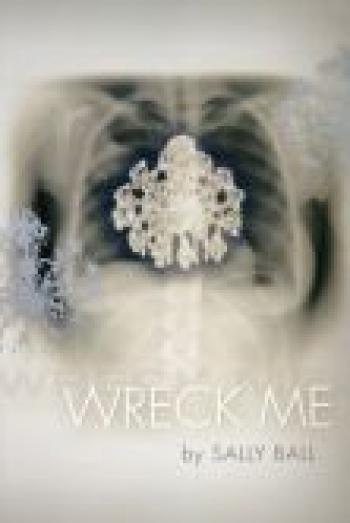 "Wreck Me" is described as "a primer of emotional violence – a primer because, as these unassumingly gorgeous poems know so well, we can only be beginners when we confront our wish to be seized, transported, remade.

"We love / that ravishment," says Ball of what we simultaneously fear and crave.

The ASU Book Group meets the last Wednesday of the month, and is sponsored by the Department of English. The group focuses on ASU staff and faculty books and books by local authors.

February's book is “The Five Deaths of Roxanne Love,” by Erin Quinn of Gilbert. Her paranormal romance novel will be discussed in room 316 of the Durham, Language and Literature Building Feb. 25.