Maynard will lead business journalism training efforts for the Reynolds Center, the world’s premier provider of ongoing training for business reporters and editors. The center is supported through grants from the Donald W. Reynolds Foundation. 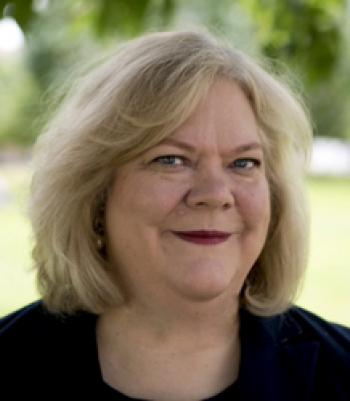 “The Trustees of the Donald W. Reynolds Foundation have invested nearly $20 million at ASU to help advance the field of business journalism nationally,” said Reynolds Foundation President Steven Anderson. “The appointment of a professional with the national stature of Micheline Maynard to direct the Reynolds National Center for Business Journalism builds upon a tradition of leaders who preceded her. Like them, she is an award-winning journalist, author and educator. We look forward to the advancements the Center will experience under her entrepreneurial leadership.”

Maynard, who will take over her new role this summer, taught at the Cronkite School as a Reynolds Visiting Professor in Business Journalism during the spring 2014 semester. She replaces Linda Austin, an experienced newsroom leader who led the center for more than five years.

As the new director, Maynard will set the direction for the center and develop and deliver a variety of business journalism training programs for professional journalists, including webinars, workshops and conferences. She also will oversee the Reynolds Center’s new online graduate certificate in business journalism and work to extend the Reynolds brand globally.

“I'm excited to be joining the Reynolds Center team, which is already a legend for business journalism education,” Maynard said. “My goal is to help journalists everywhere understand the role money plays in every kind of story, from traditional business coverage to education, sports and politics, just to name a few areas.”

As a senior business correspondent for The New York Times, Maynard directed multimedia coverage of the automotive and airline industries. Prior to that, she ran the newspaper’s Detroit bureau, directing coverage of the auto industry and other national news stories. She was the 2009 recipient of the Nathaniel Nash Award, which recognizes outstanding business and economics coverage and collegiality by a Times staffer.

In 2010, Maynard became senior editor of a two-year Corporation for Public Broadcasting project called “Changing Gears,” directing a staff that produced multimedia coverage on the reinvention of the industrial Midwest. Last year, she launched a new crowd-funded journalism venture, “Curbing Cars: Rethinking How We Get Around,” examining why people are driving less and turning to alternative types of transportation. Her e-book, “Curbing Cars: America's Independence from the Auto Industry,” was published in April as part of Forbes Magazine's new e-book series. She also writes the “Voyages” blog on transportation and reinvention topics for Forbes.com.

Maynard is the author of four other books and is the recipient of a Regional Edward R. Murrow Award, a National Headliner Award, and a Society of American Business Editors and Writers honor for print and online coverage of the 2010 General Motors bankruptcy.

“Micki Maynard has been a leader in business journalism for some of our country’s most-respected news organizations, and she has the kind of entrepreneurial spirit that will serve the Reynolds Center well as we move forward,” said Cronkite School Dean Christopher Callahan. “I can’t think of a better person to lead the Reynolds Center in offering world-class professional training and development for journalists.”

The Donald W. Reynolds Foundation is a national philanthropic organization founded in 1954 by the late media entrepreneur for whom it is named. Headquartered in Las Vegas, it has committed more than $115 million nationwide through its Journalism Program.

In the study, ASU social science professors incorporated knowledge of how complex social and biological relations contribute to friendship behavior.

Overweight young people are more likely to be rejected as friends by peers who are of normal weight, according to new research by Arizona State University social scientists.

“Using Social Network Analysis to Clarify the Role of Obesity in Adolescent Friend Selection,” published in the American Journal of Public Health by Arizona State University associate professors David R. Schaefer of the School of Human Evolution and Social Change and Sandra D. Simpkins of the T. Denny Sanford School of Social and Family Dynamics, incorporated knowledge of how complex social and biological relations contribute to friendship behavior.

Young people are also more likely to socially marginalize those who are overweight. As a consequence, overweight youth have one fewer friend, on average, than normal weight young people.

“This is especially troubling since friendships are important sources of support and companionship,” Simpkins said. “Not having or losing friends is associated with higher depression and lower self-worth for young people, which could exacerbate the health problems associated with being overweight.”

The influence of not having friends or being shunned because of extra weight can be especially difficult during formative teen years.

“Negative repercussions of not having friends may be more pronounced in middle- and high-school when intimacy and fitting into peer groups is critical,” Schaefer said.

Researchers analyzed data for the study from the National Longitudinal Study of Adolescent Health that surveyed 58,987 students in 88 middle and high schools. The average age of the multiracial survey sample was 15 and 51 percent were female. Approximately 20 percent of students surveyed provided body mass index data. Students who participated in the study identified their 10 closest friends, five of whom were female and five who were male.

Researchers utilized social network analysis in the study in order to account for different types of friend selection processes, such as attraction based on similarities, meeting during extracurricular activities, or meeting through a mutual friend. This allowed the researchers to isolate the effect of weight status on friend selection.

“Long-term implications of the study include considering ramifications of social marginalization for prevention and intervention strategies that support the emotional development of overweight youth,” Simpkins said.

The School of Human Evolution and Social Change and T. Denny Sanford School of Social and Family Dynamics are academic units in ASU's College of Liberal Arts and Sciences.