ASU engineer Amy Landis has a pivotal role in a new potentially far-reaching effort to use biomaterial to produce rubber in a more environmentally and economically sustainable way.

She will lead the sustainability assessment for a four-year project teaming Cooper Tire & Rubber Company, Yulex Corporation, ASU and the U.S. Department of Agriculture (USDA). 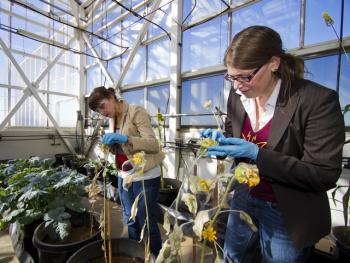 The project has been awarded a $6.9 million grant through the Biomass Research and Development Initiative of the USDA and the U.S. Department of Energy.

The endeavor focuses on the guayule plant (pronounced why-you-lee), from which latex can be extracted and turned into rubber. It holds promise for being a feasible alternative to petroleum-based synthetics that are now the predominant form of rubber in tires and many other products using rubber.

In addition to producing rubber, guayule material could be used to make industrial, medical, consumer and energy products, as well as biofuels. Substantial use of the plant could reduce the United States’ dependence on producers in other countries for the nation’s supply of rubber.

Landis is an associate professor in the School of Sustainable Engineering and the Built Environment, one of ASU’s Ira A. Fulton Schools of Engineering. She is also a senior sustainability scientist in the university’s Global Institute of Sustainability.

Her role in the guayule project is to help ensure its use will, in fact, be sustainable in multiple ways.

“Just because you are using a biomaterial does not guarantee what you do will be a ‘green’ venture,” Landis says. “I will be looking at the entire process of creating rubber products, from the agricultural process of growing and harvesting guayule, extracting and processing natural latex, and manufacturing natural rubber tires. The sustainability assessment will evaluate factors such as local impact on the land where guayule is grown and the how cultivation of the crop changes the landscape for the neighboring farmers.”

Her sustainability analysis will also take into consideration “human elements” and community impacts. “This involves looking at things like the potential for job creation and who will be employed throughout the process” of growing and processing guayule to make rubber on a large scale, as well as the implications for communities’ quality of life, she says.

“Our contribution to the sustainability assessment includes a complete life cycle assessment of natural rubber tires,” she says. “We don’t want to ignore or overlook any short-term or long-term impact.”

Increased use of guayule could eventually offer a particular benefit for Arizona’s economy. The state is the center of operations for the project partner corporation Yulex, which is already producing some products using guayule, including mattresses and pillows.

The Yulex corporate headquarters is close to Phoenix Sky Harbor International Airport. Its manufacturing facility is in Chandler, and the company gets its supply of the plant from some of the eight or more commercial farmers growing the crop in Arizona.

The reach of the project promises to extend much further through lead project partner Cooper Tire and Rubber Company, which is the parent company of a family of companies in 11 countries that specialize in the design, manufacture, marketing and sales of passenger car and light truck tires. The Ohio-based company also has joint ventures, affiliates and subsidiaries that specialize in medium truck, motorcycle and racing tires.

Both Yulex and Cooper have developed company initiatives aimed at operating their enterprises in socially and ecologically responsible ways.

As part of the project, Landis also will explore the impacts of ramping up the use of nonlatex portions of the guayule plant to produce biofuel, bioenergy and fertilizers.

In a separate project, Landis will team with University of Pittsburgh chemical engineer Vikas Khanna on a sustainability research project being supported by a recent $350,000 grant to ASU from the USDA.

The project’s main thrust is to provide data to guide alignment of varying local, state and national policies to set consistent parameters for development and production of biofuels.

It’s part of a larger federal program aimed at spurring the production of bioenergy and biobased products, while at the same time ensuring the environmental and socioeconomic sustainability of such ventures.

Another of the program’s goals in promoting further development of biomaterials to produce fuel and energy is to create new markets for the nation’s agricultural products.

ASU is among universities selected to receive grants from the program through a competitive process. Applicants for the grant awarded to ASU included some of the top university sustainability research programs in the country, Landis says.

Student finds valuable learning experience both inside and outside classroom

When Jeanne (Juno) Schaser declared a major in photography at ASU two years ago, she was excited to be taking classes from some of the top professionals in the field, people whose work appeared in major museum collections around the world.

Student finds valuable learning experience both inside and outside classroom

When Jeanne (Juno) Schaser came to ASU two years ago as a transfer student from Eastern Arizona College, she was excited to be taking classes from some of the top photographers in the field, people whose work appeared in major museum collections around the world.

What she didn’t realize was that she would be learning as much outside the classroom as inside, through internships, work-study programs and capstone projects that stretched her abilities and helped her talent bloom. 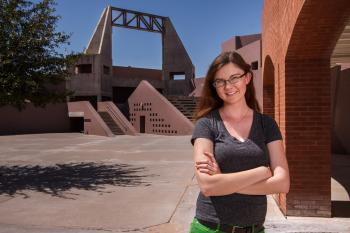 Schaser originally applied and was accepted to both Northern Arizona University and the University of Arizona, but chose ASU for its excellent photography program. She isn’t regretting her choice – the ASU School of Art was the only program in Arizona to rank in the top 25 on the 2014 U.S. News & World Report.

As a double major in photography and museum studies, she works as an intern at the ASU Art Museum and also an editorial assistant in ASU Media Relations, and she has curated an exhibition of her own at ASU’s Step Gallery. This semester she’s also working at ASU’s Northlight Gallery, learning how to care for archived photographs as well as how to plan and coordinate exhibitions from the gallery's collection.

“I’ve gotten to pursue so many diverse opportunities, I don’t think I could have done this anywhere else but ASU,” Schaser says. “I’ve gotten hands-on experience at every place I’ve worked. I’ve tried out a lot of things and learned a lot of different components of what a career could offer.”

Transferring from Eastern Arizona College in Thatcher, Schaser was drawn to ASU by its top-notch faculty in photography, including Elizabeth (Betsy) Schneider, an associate professor in the School of Art who won a Guggenheim Fellowship in 2011.

“Professor Schneider is great, one of my favorite professors,” says Schaser. “She has such a great energy and is always willing to meet with you at any time and to look at your work and offer suggestions. I still meet with her, because I value her input so much.”

Another formative experience was taking a course on gallery exhibitions from faculty associate Peter Bugg. She was required to create a proposal for a gallery show, and with Bugg’s encouragement she submitted her exhibition proposal to a campus committee and was selected to curate a show at the Step Gallery.

Her show, “Crave: The Art of Dependency,” looked at the phenomenon of addiction through various media produced by different artists, about half of them students and the other half photographers in Northlight’s archive. It was a moving, personal show that also boosted Schaser’s resume.

“The exhibition was one of the most exciting things I’ve ever done,” she says.

Schaser’s father gave her a camera when she was seven years old, and after seeing her delight with the hobby he bought her a digital camera a few years later. Fresh out of high school, she was doing freelance photography for the local newspaper, the Eastern Arizona Courier.

She says she loves the dynamic nature of photography, and the way it both records and interprets culture.

At ASU Media Relations she puts both her writing and artistic skills to work, helping edit the ASU News website, posting the weekly photo gallery and managing the ASU News Twitter account. She also has taken photos at ASU commencement ceremonies, an event she says is “really exciting, with a lot of different moving parts.”

“I’m excited that I have so many opportunities. I don’t have to run out and take the first job. I love it that my path isn’t set in stone.”