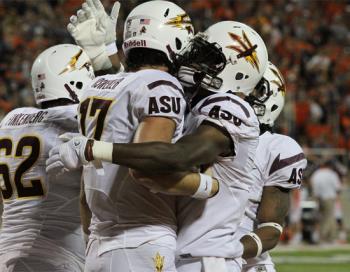 According to the Pac-12 Conference Office, which released the composite 2012 football schedule today, dates during the first two weeks of the non-conference schedule are still being adjusted to accommodate television commitments, but the remainder of the schedule is set. With the new ESPN and FOX media rights agreement as well as the launch of the Pac-12 Networks in August, every Pac-12 football game will be available to fans on a national clearance, eliminating regional distribution which was prevalent in the prior broadcast arrangements.

The second Pac-12 Championship game will be played on Friday, November 30 at the home stadium of the team with the best overall conference record, ensuring a full stadium and an electric collegiate atmosphere befitting of a major conference championship game.

The 2012 Sun Devils will open the campaign by hosting Northern Arizona on a date to be determined.  Illinois visits Sun Devil Stadium on September 8.  ASU’s first road game of the season follows on September 15 at Missouri.

ASU’s first 2012 Pac-12 Conference game will be on September 22 when it plays host to Utah for the first time since the new 12-team league was formed. That will be followed by a road conference game on September 29 with California.  After a bye week on October 6, ASU will play two straight Thursday night games – October 11 at Colorado and October 18 hosting Oregon.

After the consecutive Thursday games, the Sun Devils play host to UCLA on October 27.

November begins with consecutive road games – at Oregon State on November 3 and at USC on November 10.

The Sun Devils return to finish the home portion of the 2012 campaign with a November 17 game versus Washington State.

Every Pac-12 team will have two “misses” each year, or teams they do not face.  ASU’s misses in 2012 are Stanford and Washington.

UP NEXT
The Arizona State women’s basketball team closes out its season-long, five-game homestand this week when it hosts USC (Thurs., 6:30 p.m. MT) and UCLA (Sat., 4 p.m. MT) at Wells Fargo Arena.

The Sun Devils (10-2, 1-0 Pac-12) are one of four teams (Stanford, Washington State and Colorado) which made it out of the first weekend of Pac-12 play unbeaten following their 60-45 State Farm Territorial Cup Series win over Arizona on Saturday.

ASU came through with a brilliant defensive performance against the Wildcats, who came into the game on a six-game winning streak. The Sun Devils held the Wildcats to more than 28 points under their 73.3-points-per-game average.

Kimberly Brandon and Micaela Pickens each scored 13 points to pace ASU, which used an 11-0 run in the second half to take control of the game after trailing Arizona 26-25 at the half. As a team, the Sun Devils had 19 assists and only 10 turnover, their second-lowest turnover total of the season. ASU also outrebounded Arizona 46-33, including 18-5 on the offensive glass, which led to an 11-2 advantage in second-chance points.

The Sun Devils will look to continue their success at home this week where they are 8-0 in 2011-12. A win against USC on Thursday would match ASU’s longest winning streak of the season (four games). Wins in both games this weekend would give ASU its first 3-0 start in conference play since 2008.

USC (6-6, 1-1 Pac-12) came into the Pac-12 season as arguably the most battle-tested squad in the conference after enduring a non-conference slate which included five teams ranked in the Top 40 of the current NCAA’s RPI. The Women of Troy opened conference play with a split after falling to No. 4 Stanford 61-53 before rebounding to defeat Cal 74-54. USC is led by a trio of players who are currently ranked in the top 16 of the Pac-12 in scoring -- senior guard Ashley Corral (12th - 12.2 ppg), sophomore forward Cassie Harberts (14th - 12.0 ppg) and senior guard Briana Gilbreath (16th - 11.4 ppg).

RADIO/WEBCAST
Thursday’s game can be heard live on The Fan AM 1060. It can also be heard on thesundevils.com (premium subscription required). Coverage will begin at 6 p.m. Veteran broadcaster and the state of Arizona’s 2010 Broadcaster of the Year Jeff Munn is in his eighth season as the voice of ASU women’s basketball. He will be joined by former Sun Devil head coach Maura McHugh.

Fox Sports Arizona will also be carrying a live webcast of Thursday’s game at www.foxsportsarizona.com.

DEVILS BRING THE ‘D’
One of the hallmarks of ASU’s formula for success over the years has been defense. It has been no different in 2011-12 as the Sun Devils have been consistently coming through with dominant performances throughout the season. How dominant? Thus far in 2011-12 the Sun Devils have held every opponent below each of their respective scoring averages and have held all but one opponent below their field goal percentage for the season.

DePaul became the first of ASU’s 2011-12 opponents to shoot a better percentage than it did coming into the game as it shot 46 percent in its 73-55 win over ASU on Dec. 16 in Chicago.