The Arizona State University Alumni Association and the Sun Devil Club will welcome Eric Allen and Darren Woodson to the ASU Ring of Honor at its Oct. 31 Legends Luncheon.

“Our football program has a storied legacy, and Eric and Darren played a big part in shaping it,” says Ray Anderson, vice president for university athletics. “I was fortunate to get to know both of them during my time with the National Football League, and it is humbling to have the opportunity to welcome these giants of the game back to Tempe.”

Allen and Woodson are two of the most decorated defensive backs in school history, and both have been inducted into the ASU Sports Hall of Fame. The duo will join 20 other Sun Devil football greats in the prestigious Ring of Honor, which was created in 2010 and recognizes individuals who have made outstanding contributions to the legacy of the Sun Devil Football program.

“An important aspect of the Sun Devil Brotherhood is respecting those who came before you, and it would be hard to find two better role models in our program’s history than Eric and Darren,” said Head Footbal Coach Todd Graham. “This pair embodies greatness, both at the collegiate and professional levels, as well as off the field, and our student-athletes will be lucky to share the field with these great ASU ambassadors on Nov. 1.”

The luncheon takes place the day before ASU plays its Homecoming game against the University of Utah on Nov. 1 at Sun Devil Stadium. Allen and Woodson will receive maroon jackets at the luncheon and be presented with official rings designating their induction during halftime of the game versus the Utes.

“The academic scholarship component of the program sets this honor apart from others and embodies our mantra ‘Sun Devil For Life,’” said Kevin Miniefield, coordinator for Former Student-Athlete Outreach with the Sun Devil Club. “It provides an opportunity for our former football lettermen to give back financially to the Sun Devil Club and direct their donations specifically toward football academic scholarships on an annual basis.”

The luncheon starts at 11:30 a.m. at the Marriott Tempe at the Buttes, 2000 Westcourt Way in Tempe, and pays homage to past inductees as well, which include Frank Kush, Ron Pritchard, Mike Haynes and Pat Tillman, among others.

“Legends Luncheon pays tribute to the men who built Sun Devil football,” says Christine K. Wilkinson, president of the ASU Alumni Association. “The Ring of Honor Society has become a powerful way to honor the players who have made ASU a legendary football school, and we look forward to showcasing these two great alumni at this event.”

For more information on the Legends Luncheon, visit http://alumni.asu.edu/legends

Allen played for Arizona State from 1983-1987 and was a part of three bowl teams at ASU, including the 1986 team that defeated Michigan 22-15 in the Rose Bowl on Jan. 1, 1987. Allen finished his career with 15 interceptions, including eight as a senior in 1987. He was an All-Pac-10 selection and received honorable mention AP All-America honors for his senior season, and he was a six-time Pro Bowl selection during a 14-year NFL career with the Philadelphia Eagles, New Orleans Saints and Oakland Raiders. Allen was inducted into the ASU Hall of Fame in 2008.

Woodson was a Sun Devil from 1989-1991 and was a three-time All Pac-10 Honorable Mention and captain of the 1991 team during his senior season. A second round draft choice of the Dallas Cowboys in the 1992 NFL Draft, Woodson went on to become one of the best defensive players in NFL history. A five-time pro bowler, Woodson retired from the Cowboys in 2005 as the all-time leading tackler in franchise history. He finished his NFL career with 23 interceptions, and was a member of three Super Bowl championship teams. Woodson was inducted into the ASU Hall of Fame in 2005.

A team of researchers led by ASU professor Paul Hirt has won a planning grant from the National Endowment for the Humanities for a project titled “Nature, History and Culture at the Nation’s Edge.”

A team of researchers led by professor Paul Hirt of Arizona State University's School of Historical, Philosophical and Religious Studies has won a planning grant from the National Endowment for the Humanities for a project titled “Nature, History and Culture at the Nation’s Edge.”

The team of leading borderland scholars will work with historical and cultural organizations in rural communities to plan a multi-format interpretation of the unique cultures, history and physical landscapes of the Arizona-Sonora borderlands region. This project began as a Seed Grant funded by the Institute for Humanities Research. 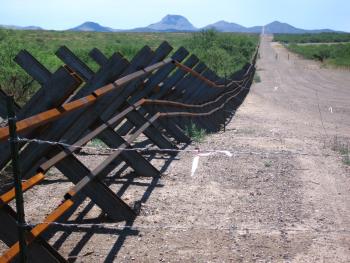 The objective is to study how the different cultures in the region have adapted to the natural environment, and how the effect of political and tribal borders has resulted in the communities that exist today. The team will focus on such themes as the border through time; bridging cultures across borders; nature and history; and shared identity amid social diversity.

“This borderlands project is an extension of collaborative work I have been doing with colleagues at four Southwestern universities since 2007: ASU, University of Arizona, University of New Mexico and New Mexico State University,” says Hirt. “One of the many outcomes of that work was a photographic exhibit that we brought to Phoenix in 2011, and has since been turned into a book.”

Rep. Kyrsten Sinema, in a letter to professor Hirt, said, “The School [of Historical, Philosophical and Religious Studies] is doing an exceptional job of providing a unique and powerful education to our students that includes valuable knowledge about our most vulnerable communities, and I am inspired by the efforts of you and your colleagues.”

The School of Historical, Philosophical and Religious Studies is an academic unit in the College of Liberal Arts and Sciences.