A team of three recent Arizona State University graduates and one undergraduate are on their way to Sydney, Australia to represent the United States in the premiere international student technology competition July 6-10. 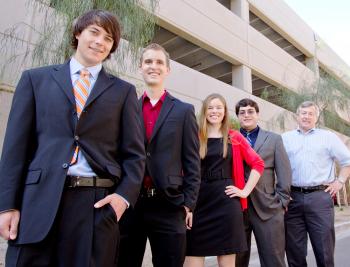 It’s the second year in a row a team of ASU students won the U.S. Imagine Cup finals and will go to the world finals.

The prizes for FlashFood’s win in competition with more than 20 student teams from throughout the country included $8,000 to help fund the team’s entrepreneurial venture, as well as a $10,000 donation to ASU. Now FlashFood will compete for additional support against teams from about 75 other countries in the world finals.

FlashFood’s winning project involves a mobile phone application to help establish a network to connect restaurants, hotels, catering and banquet services with teams of people who would collect leftover and excess food and transport to community centers, churches and other neighborhood locations where it can be distributed to people in need.

The idea for the endeavor emerged from the Engineering Projects in Community Service program (EPICS) in ASU’s Ira A. Fulton Schools of Engineering, and from team member Jake Irvin’s involvement with Students In Free Enterprise, a global entrepreneurial non-profit organization with affiliate groups at more than 1,500 universities.

Richard Filley, director of the EPICS program and the team’s faculty adviser, will accompany the students to Australia.

With the focus of the competition expanding to a global scale, the members of FlashFood have been working to adapt their venture to an operations model that could be applied to various types of communities throughout the world.

They are working with international groups and organizations to research the issue of food insecurity on a global scale.

“We've been holding focus groups, and generating dialogue with friends and colleagues from countries around the world,  so that FlashFood can fight hunger and food waste internationally,” Keberle says.

Competing in the Imagine Cup Worldwide Finals will give the team “an opportunity to expand our product and form it into something that can be applied in any country,” she says.

“Around the world, there are certain similarities that could make FlashFood effective in different countries,” Keberle says. “Regardless of location, individuals in poverty do have access to cell phones, and there are several international hotel chains that face similar food-waste challenges.”

The program began in 2003 with only 1,000 students on participating teams. It has since grown into one of the largest student technology competitions in the world. By last year about 350,000 students from 183 countries were members of teams that entered the first rounds of Imagine Cup competitions.

FlashFood is going into the Imagine Cup World Finals with an impressive track record. The team has won awards and support from several competitions and programs, including the ASU Innovation Challenge, the Entrepreneurs @ ASU Elevator Pitch, the ASU 10,000 Solutions Leap Day Challenge and the international Dell Social Innovation Challenge People’s Choice Awards.

The team has also won a $12,000 grant from ASU’s Edson Student Entrepreneur Initiative, which brought them support in the way of office space and mentoring from experienced entrepreneurs

In addition, FlashFood was recently selected as a semifinalist in the 2012 Global Sustainability Challenge, a national competition Nov 7-9 in Louisville, Ky., hosted by YUM!

By Joe Kullman and Natalie Pierce

Emily Stergar, an Master of Fine Arts in sculpture graduate, and Christopher Torres, an Master of Fine Arts in ceramics graduate of the Arizona State University School of Art, have been awarded the prestigious International Sculpture Center's Outstanding Student Achievement in Contemporary Sculpture Award for 2012. Stergar and Torres were selected from an international pool of more than 400 stude...

Emily Stergar, an Master of Fine Arts in sculpture graduate, and Christopher Torres, an Master of Fine Arts in ceramics graduate of the Arizona State University School of Art, have been awarded the prestigious International Sculpture Center's Outstanding Student Achievement in Contemporary Sculpture Award for 2012. Stergar and Torres were selected from an international pool of more than 400 students representing six countries and 174 institutions of higher learning.

Together they join 10 other recipients to participate in the "Grounds For Sculpture's Fall/Winter Exhibition" that will be on view from Oct. 20 through April 7, 2013, in Hamilton, New Jersey. 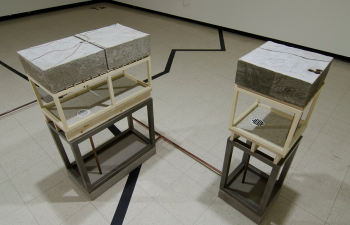 The artists' work will be featured in the October 2012 issue of the International Sculpture Center's publication, Sculpture magazine, as well as on the ISC's website.